Yet another snowy, icy, messy blast of winter weather descended on the northeast United States overnight on Thursday. Residents woke up to snarled, slippery roads covered with a few inches of snow as flakes continued to fall outside, but many businesses and schools had already closed their doors in anticipation of the storm.

The giant snowy system was expected to turn to rain in Washington, D.C. and New York by midday, but that didn’t stop the federal government from shutting its doors to keep people off the roads. Washington also closed its two main airports, Dulles and Reagan National, because removal crews couldn’t keep up with the pace of the snow. The Washington Post reports Dulles in suburban Virginia received 10 inches of snow by 8:30 a.m. and the entire capital region was bracing for up to a foot of snow, while in New York’s Central Park, forecasters were calling for upwards of six inches.

Salt supplies have dwindled in many towns, as the third storm in two weeks blasts the region. The snow is expected to be heaviest in inland areas and at higher elevations, with 12 to 18 inches of snow on its way. New York governor Andrew Cuomo declared a state of emergency for a large portion of the New York City metropolitan area as the strongest wave of the storm approached late Thursday morning. Metro-North Railroad, the main commuting train line from Connecticut’s suburbs, reduced its trains by 75 percent for the morning commute in the interest of safety, and to encourage people to stay home.

Cities from Albany, N.Y. to Boston could face snow throughout the day Thursday and even into Friday. States were taking no chances as National Weather Service forecasters called for the worst. A Wednesday report from the government agency called the storm “Catastrophic…Crippling…Paralyzing…Choose your adjective.” Governors declared states of emergency throughout the storm’s wide swath, from Louisiana to New Jersey.

The storm has already resulted in 12 deaths in the south, the Associated Press reports, including three who died when an ambulance spun off an icy road in northern Texas. Four thousand flights were canceled, including a majority of those out of Atlanta’s airport, the nation’s busiest.

Southern states saw historic and nearly record-breaking accumulations, with Charlotte, N.C. getting hit with more than eight inches of ice and snow, and some parts of South Carolina—better known for its balmy summer weather—facing up to 9 inches. About 500,000 people throughout the south were without power Thursday morning as light snow continued to fall. But the bulk of the storm had already moved out.

In stark contrast to snarled traffic two weeks ago, highways around Atlanta looked like a ghost town as residents heeded the mayor’s call to stay off the roads. Much of the state will remain closed Thursday as crews continued to clear snow and ice.

This story will be frequently updated to reflect the changing amounts of snow and power outages throughout the nation. 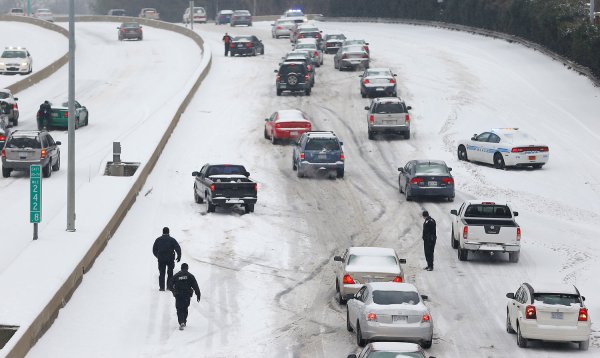