Frozen made Lisa Rosenberg want to be a princess–which, considering that it’s a Disney princess movie, isn’t all that strange. What’s surprising is that Rosenberg is 23 and that the film has inspired lots of adult women just like her. When she and her friend Meagan Marie Vanburkleo, 28, announced online that they were making versions of the heroines’ costumes, they were immediately invited to a Facebook group for people who had the same idea. And that’s just the tip of the iceberg.

Since its limited release on Nov. 22, Frozen has raked in $914 million at box offices worldwide, outstripping The Hunger Games: Catching Fire as the third highest grossing film of 2013. Critics adored it, it has two Oscar nominations–Best Animated Film and Best Original Song–and its soundtrack has topped Billboard’s album chart in four different weeks, the first time that’s happened with a soundtrack since Bad Boys II in 2003.

Disney has already announced plans to bring a musical version to Broadway, and theme-park incarnations have been hinted at. Two weeks ago, the movie was rereleased in a sing-along version, which has drawn a mix of adults and children.

The cold, hard fact: it’s the highest grossing Disney Animation movie ever in the U.S., and as Disney execs told investors during a Feb. 5 conference call, Frozen merch is the hottest seller at Disney’s stores.

There’s no denying that Frozen has a certain je ne sais froid, but not everyone agrees on what exactly it is. “For me, it’s the characters,” says Rosenberg, who spent weeks working on her insanely accurate Princess Anna costume before commemorating the effort with an elaborate photo shoot. “It’s how they relate to me that makes me want to be them.”

Based on Hans Christian Andersen’s 1845 story “The Snow Queen,” the film offers compelling heroines who face dilemmas that have strong modern-day parallels. Queen-to-be Elsa has the power to control ice and snow, but everyone she loves tells her to hide it, lest she tear her kingdom apart. Her sister Anna doesn’t have mystical gifts but is so dedicated to her older sibling that she comes on like an avalanche when Elsa finds herself in a tough spot. The message is about being yourself–even if your family doesn’t get you–and the value of sisterhood. There’s a charming prince and a plot point about the power of true love, but neither is what audiences might expect from the studio that made marriage-plot classics The Little Mermaid and Sleeping Beauty.

The experts agree, and Peggy Orenstein, the author of Cinderella Ate My Daughter, is one of them. “There were things that [the filmmakers] were clearly thinking about to be contemporary about girls and women,” Orenstein says. She sees it as a step forward, even though she quibbles with how Elsa’s story links female empowerment with “getting hot.” When Elsa finally accepts her magical powers, she “suddenly comes out looking like a country singer onstage, like Taylor Swift,” Orenstein says.

Along with boasting feel-good characters, Frozen has harnessed the power of the Internet. One sign of how inspirational the movie has been is in the online life of its most anthemic song, “Let It Go,” in which Elsa embraces her abilities with full gusto and promises that she will not be forced to hide any longer. Since early December, the official music video has been watched more than 85 million times on YouTube, and a pop-rock version by Demi Lovato has another 69 million views–not to mention the more than 3 million other videos that pop up in a Frozen/”Let It Go” YouTube search. There are versions by singer-songwriter types and versions that show you how to play the song on guitar. There are cute versions sung by toddlers and club-music remix versions. There are versions in dozens of languages and parody versions that use strategic bleeping to make the song seem raunchy. YouTube views don’t directly contribute to box-office numbers–and neither do myriad blog posts about the movie’s feminist cred–but they’ve kept the movie in the cultural conversation months after most November releases have melted away.

There are other impacts that can’t be measured by stats. Kristen Anderson-Lopez, who co-wrote the movie’s songs with her husband Robert Lopez, tells TIME that she’s been told the songs have helped children overcome speech impediments. ” ‘Bobby and I are delighted and bewildered’ is the best way to put it. We never imagined this,” she says. “When you get a story like that, you don’t analyze why.”

Rosenberg and Vanburkleo, who live in Minneapolis and San Francisco, respectively, are part of an extensive community–cosplayers, as they’re known–who create elaborate costumes of their favorite characters, and the look of Frozen has won over their fellows, who also tend to be active in Internet fan groups. “Frozen is just a single movie, but it’s got a life of its own outside the theaters when it comes to online,” says Vanburkleo, who works as a social-media manager for a game company. “There are Tumblr blogs and Facebook groups, and the fans really keep content alive, which I think is great for brands.”

Then there are the factors that have long made Disney heroines popular. Frozen has a bevy of beautiful dresses, plenty of funny moments, tunes you can hum and a gripping story. “They just hit a home run,” says Abby Root, 23, of Queens, N.Y. “The music is really great, and it’s that classic musical structure we haven’t seen for a long time. The animation’s really beautiful. The story is well done.”

That’s something more-typical princess fans can get behind too. On a recent Saturday night in Brooklyn, Colleen Douglas, 34, and her daughter Lenora, 4, emerge from their sixth go-round with Frozen. Together they sum up the full range of reasons for the movie’s success, suggesting that the magic is in the combination. Lenora clutches a Frozen doll and wears a sparkly blue Frozen dress under her winter coat, and–thanks to the movie’s other assets–her mother is O.K. with it. “I don’t mind watching it like 12 times,” says Douglas. “It’s one of the first Disney movies where [the message] is like, ‘You can’t marry a strange man you just met.'” 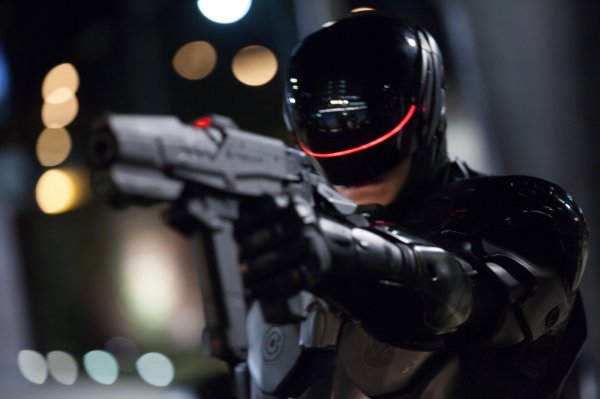 'RoboCop': Beware the Big Bad Drones
Next Up: Editor's Pick