I have come to accept that I am never going to compete in the Winter Olympics. This is largely because I have never tried any of the sports. In fact, I have avoided all athletic activities of any kind for my entire life. I’ve always assumed that through no fault of my own, I was born without the genes that would make me able to ski and then stop skiing and shoot things, or to steer a bobsled after a giant man pushed us downhill.

To find out if I was right, Pathway Genomics, which uses a spit sample to deliver nutrition and exercise recommendations tailored to your genes, compared my DNA with that of Olympic gold medalist Sergei Bubka, the greatest pole vaulter of all time. I was guessing that of our approximately 20,000 protein-coding genes, most of mine would be too covered in fat for Pathway to read.

I went over my results with a Pathway doctor and found out, to my great disappointment, that Bubka and I were created similarly. We both have the “speed gene,” a variation of AcTN3, which is found in fast-twitch muscle fibers. Bubka uses it to generate speed on the track, and I use it to type really fast. We also both lack a gene that would show we’re prone to injury, as well as one that would give us the increased aerobic capacity of an endurance athlete. We both have a gene that probably leads to overeating, a tendency that I have controlled through will power and that Bubka controlled by growing up with Ukrainian food. The main difference between us is that I figured out that writing is much easier than propelling myself two stories in the air by running as fast as I can and shoving a stiff fiberglass pole into a metal box.

But when I looked more closely at our results, I saw that the gene INSIG2 shows that strength training is very effective for Bubka and not at all for me, which I have somehow intuited all these years and therefore avoided picking up and putting down heavy things. “Sergei is in a sense gifted when it comes to constant pressure and constant pressure on muscles. This is consistent with Olympic athletes,” said Jim Plante, the CEO and founder of Pathway. Bubka also gets a hugely advanced benefit from endurance training. I don’t get the same results, though I do get a higher-than-average benefit from the training, along with, apparently, a gene that allows me to forget I ever learned that fact, so I can continue to not go to the gym without feeling extra guilty.

I called Bubka in Sochi, where he is attending the Olympics as an IOC executive board member and president of the National Olympic Committee in Ukraine, so I could compare our youths and find out where someone with my excellent genes had gone wrong. Bubka was at a loud party right before the opening ceremony, and he has a pretty thick accent, but I’m positive that when I asked him how Sochi was, he said, “It’s really nice. Great food. Excellent villages.” Having grown up in the Soviet Union, Bubka probably doesn’t define nice in a way that includes things such as bathrooms or doorknobs.

Bubka wasn’t surprised by his genetic results, since he’s always been better at short-term, strength-oriented sports. “I was fastest and strongest of all my friends. I played sports most of the time with older guys,” he told me. When he was just 10, an older friend named Slava insisted that his pole-vaulting coach let Bubka try the sport, even though Bubka was considered way too young. When I tried pole vaulting two years ago with Olympian Brad Walker, I could neither clear the lowest level nor get Walker to stop making fun of me.

Genetic testing of athletic ability, Bubka said, should be administered to child athletes, as Uzbekistan has announced it will start doing, so that kids won’t waste time and money pursuing the wrong sport for their ability. I thought this idea was problematic in that someone might have used testing results to make me play a sport.

As much as genes do matter, Bubka said, the key to Olympic success is that “you need to have character to go to your goal, to do your work, to be a hard worker.” Actually, however, Pathway told me, though it isn’t part of the results they normally give, that both Bubka and I have a version of the DRD2 gene, which suggests that we respond positively to rewards, learn from mistakes, can be obsessive and have a low risk of addiction. Other genotypes that are even less well understood might indicate that we both are particularly driven. So in a way, I am more impressive than Bubka because I have had to work hard to fight my genes in order to be as lazy as I am. One day, I hope, the Olympics will recognize that as medal-worthy. 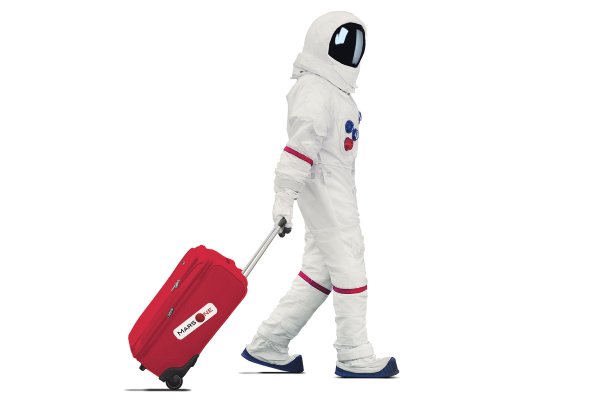 My Favorite Martians
Next Up: Editor's Pick