Our curious capitalist columnist Rana Foroohar spends much of her time talking to CEOs and finance experts about the health of the U.S. and global economies. She has been struck by how often she hears the same concern: that at a time of stubbornly slow job growth, American schools are not producing the workforce that employers need, particularly for the solid middle-class jobs that are increasingly viewed as an endangered species.

As it happens, Rana has long been interested in schools that experiment with new methods and models. She first reported on a P-Tech school (Pathways in Technology Early College High School) in Crown Heights, Brooklyn, two years ago and has tracked reform efforts ever since. Last year she spent time in Chicago’s Sarah E. Goode STEM Academy, which has partnered with IBM and other blue-chip firms to design a curriculum that so completely equips students with marketable skills that IBM guarantees them a job upon graduation. “I have never been happier as a reporter than during the time I’ve spent in these schools,” she says. “Despite all the challenges these kids are facing, which range from no quiet place to study to volatile home lives to poverty to violence–one student at Sarah Goode was shot and killed by random gunfire in his neighborhood last year–they are just so upbeat and optimistic. It’s infectious.” Rashid Davis, principal of the P-Tech in Crown Heights, told Rana that he grew up as the child of divorced parents and moved between the poorest parts of the South as well as New York City during his youth. “Education saved my life,” he said. That’s what it’s doing for a lot of the kids Rana met–and it may help save the U.S. economy in the process.

Forget what your relatives think about when you should get married. TIME’s latest interactive app scans the profiles of all your married Facebook friends to find their median age–and then tells you how much time you’ve got to meet it. Check it out at time.com/whenshouldimarry.

When TIME chief foreign affairs correspondent Michael Crowley, left, sat down with Mexican President Enrique Peña Nieto at Los Pinos, the President’s official residence in Mexico City, it was close to 9 p.m. on Feb. 3, a national holiday celebrating the anniversary of the country’s constitution. Still, the weary leader, whose looks have sparked media swooning, “was very warm, upbeat and happy to linger and chat about raising kids,” says Crowley. “And his message about his country was similar: cheerful and optimistic.”

Despite the current glut of information on Hollywood stars, it’s rare to see portraits of couples that are truly intimate. In a new video featuring photos from 1963, we explore the magnetic bond between Steve McQueen and his wife of 16 years, actress Neile Adams. Check out the video, narrated by Adams herself, at life.com/mcqueen. 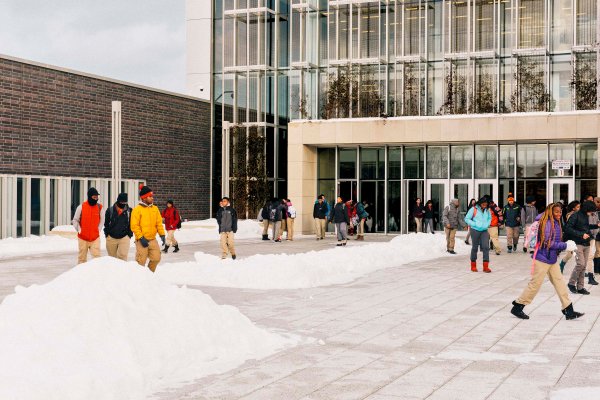 The School That Will Get You a Job
Next Up: Editor's Pick