Meb Keflezighi's Boston Marathon Win Is a Victory For Us All

One year ago, two young immigrant men, fed up with the American way of life, allegedly terrorized the Boston Marathon. A year later, an old — by marathon-running standards — immigrant who has totally embraced his adopted country won the historic race, thrilling everyone in attendance. On the first running of the Boston Marathon since last year’s bombings, Meb Keflezighi is the perfect man for the moment.

The message this victory sends to the bombers is not subtle: Screw you. You squandered your opportunity, your chance at the American dream — which still exists, thank you. You blew it. This could have been you.

Keflezighi became the first American man to win a Boston Marathon since 1983. No one gave him much of a chance, given his age — he will turn 39 next month — and the reality that since 1991, a Kenyan has won the race 19 times.

But Keflezighi has surprised skeptics before. He won a silver medal in the Athens Olympics marathon in 2004, and in 2009 became the first American to win the New York City Marathon in 27 years. That win kindled a tortured debate about “real” Americanism; a CNBC.com commentary, entitled “Marathon’s Headline Win Is Empty,” said that “the fact that [Keflezighi] is not American-born takes away from the magnitude of the achievement … Nothing against Keflezighi, but he’s like a ringer you hire to work a couple hours at your office so that you can win the executive softball league.” Comments on a running site included: “Give us all a break. It’s just another African marathon winner” and “Meb is not an American – case closed.”

Yes, Keflezighi was born in an Eritrean house with no electricity. But his family fled that country’s war with Ethiopia when he was still a young boy. “I ran my first mile here,” Keflezighi told me in a 2012 interview before the London Olympics, where he finished fourth in the marathon. “I didn’t know the sport was an option in Eritrea.” He ran cross country in grammar school and high school in San Diego, and at UCLA. He’s a product of the American running system.

CNBC.com, for its part, apologized after the flap. But all questions about Meb Keflezighi’s Americanism have surely been answered by now. Especially on this day. Last year, Keflezighi attended the race, but did not run: he left only about five minutes after the bombs went off. “When the bomb exploded, every day since I’ve wanted to come back and win it,” Keflezighi said afterwards, via USA Today. “I wanted to win it for the people of Boston. It’s beyond words.”

He doesn’t need them. A year later, Keflezighi’s win speaks louder than any bomb ever could. 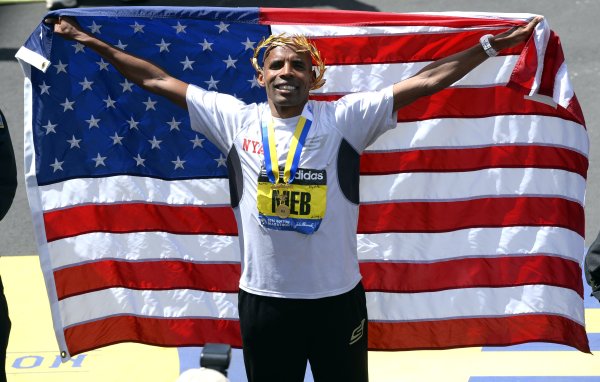