It’s Not You, It’s Science: How Perfectionism Holds Women Back

How can women rise to the top if they don't believe they belong there?
Jacquie Boyd—Getty Images/Ikon Images
By Jessica Bennett

There are certain things one might assume you’re supposed to have mastered as a columnist. One is how to start a column. But if you’re me, you can spend hours writing and rewriting and deleting and restructuring a piece before coming to the conclusion that you have no business having a column at all. Crumpled over your sad desk in your living room, in your freelance uniform (pajamas), you are pretty sure your new writing contract will be revoked by the end of the week.

Then you realize: you’re doing precisely what it is you’re supposed to be writing about — doubting yourself, over and over again, to the point of crippling paralysis. The perils of feminine self-doubt — and how they impact women’s professional aspirations — are the subject of a new book, The Confidence Code, by journalists (and recovering self-doubters) Katty Kay and Claire Shipman.

Through dozens of interviews, scientific research and even experiments in genetic testing, The Confidence Code takes on the science and art of self-assurance, as well as the fact that women (like me) tend to struggle with it disproportionately. Why it matters? Well, by now most of us have heard the stories about how women are climbing the corporate ranks, dominating the workforce and graduating in higher numbers than men. “Lean In” has become part of the pop lexicon. But what does any of that matter if women can’t have the confidence to own their accomplishments and strive for their goals? How can women equal the ranks of the professional world, the authors ask, if we don’t even believe we’re supposed to be there?

“I think there’s a mainstream recognition now that organizations are better off with a diverse group of women at the top​ — and a focus on how to get more women in the pipeline and in power,” says Shipman. “But there’s also something inside of us that’s holding us back.”

Longtime friends Kay and Shipman realized over dinner one night that each struggled with the same problem of self-doubt. Kay, a news anchor for the BBC, has covered three presidential elections, the wars in Kosovo, Afghanistan and Iraq, and speaks several languages. And yet she spent her career convinced she wasn’t smart enough to compete for the top jobs. Shipman, a contributor to ABC and Good Morning America, had a habit of telling people she’d gotten “lucky” when she asked how she got into journalism. She began her career as a foreign correspondent at CNN, reporting from Moscow.

But the confidence problem wasn’t just limited to them. In two decades covering American politics, the two journalists had interviewed some of the most powerful women in the nation — lawmakers and CEOs, professional athletes, leaders of social movements. Time and again, they saw the same self-doubt: bright women with ideas afraid to raise their hands, speak up, ask for a raise or a promotion; that inexplicable feeling that they don’t own the right to rule at the top.

“If they are feeling all that,” the authors write, “imagine what it is like for the rest of us.”

When a professional endeavor goes wrong, women are more likely to blame themselves. Yet when something goes right, they credit circumstance – or other people – for their success. (Men do the opposite.)

Women are more likely than men to be perfectionists, holding themselves back from answering a question, applying for a new job, asking for a raise, until they’re absolutely 100 percent sure we can predict the outcome. (Women applied for a promotion only when they met 100 percent of the qualifications. Men applied when they met 50 percent.)

Women are a quarter as likely as men to negotiate a raise. We doubt our opinions and begin our sentences with “I don’t know if this is right, but—.” We are more prone to “rumination” than men – which causes us to overthink and overanalyze. (Sound familiar?)

I was watching Hillary Clinton up on stage recently, at a conference for women. She was asked to give the younger generation career advice. “At this point in my career, I’ve employed so many young people,” Hillary began. “One of the differences is that when I say to a young woman, ‘I want you to take on this extra responsibility,” almost invariably she says, ‘Do you think I’m ready?’ But when I ask a man, he goes, ‘How high, how fast, when do I start?!’”

“Too many young women,” Clinton continued, “are harder on themselves than circumstances warrant. They are too often selling themselves short.”

In other words, they lack confidence. And confidence, as the authors make clear, is as important to professional success as competence.

Now naturally, there are plenty of ways that women can gain confidence. And in fact, it’s not quite so simple as learning those skills. (In many cases, it’s the same qualities that make women good for business — they are more collaborative, for example — that holds them back from touting their accomplishments or taking credit.) We also need to address structural changes that hold women back — as, naturally, there’s only so much leaning in a person can do.

But perhaps the most useful aspect of all of this talk about confidence is recognizing that it’s a problem at all. Knowing that it’s there, that it’s backed by science, that it’s not just you – and then trying to correct for it.

“I think it’s important for women to recognize that it’s totally normal for us to feel nervous, particularly in situations in which we’re so often the only woman in the room,” says Kay. “That realization — for me, anyway — has helped me work to overcome it.”

Jessica Bennett is contributing columnist at Time.com covering the intersection of women, business and pop culture. A former Newsweek senior writer, she is also a contributing editor for Sheryl Sandberg’s women’s foundation, Lean In. You can follow her @jess7bennett 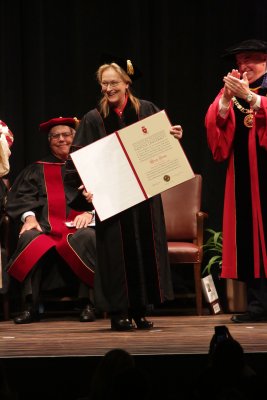 Here's Meryl Streep's Spot-On Advice About Being a Woman
Next Up: Editor's Pick