The Big Bang Did NOT Occur 50 Years Ago

The Big Bang: Just to be clear, this did not happen in 1964
LAGUNA DESIGN; Getty Images/Brand X
By Jeffrey Kluger

If you’re over 50, you probably remember the Big Bang—indeed, it would be hard to forget it. One moment you’re part of an infinitely tiny, infinitely dense point that contains the entirety of the universe, and the next moment you’re accelerating outward faster than the speed of light, expanding along with space-time itself. That’s a remember-when day if ever there was one.

You might argue that the Big Bang occurred a bit earlier than 50 years ago—13.8 billion years earlier, in fact—and most people might agree with you. What actually happened 50 years ago was that Arno Penzias and Robert Wilson of Bell Labs made measurements of the cosmic background radiation that provided the first solid evidence of the Big Bang’s existence. Still, that didn’t stop Bell Labs itself from noting the event with a recent e-mail blast inviting recipients to “Celebrate the 50th Anniv. of the Big Bang.” In light of a just-released AP poll showing that a stunning 51% of Americans say they are “not at all confident” or “not too confident” that the Big Bang even occurred, the last thing we need is more confusion on the point.

OK, it’s not entirely fair to pick on Bell Labs. The mere fact that whoever composed the message felt a need to abbreviate the word “anniversary” reflects how hard it is to get anyone to open an e-mail message today unless the subject line is short and semaphores excitement. Still the e-mail does, even indirectly, speak to a certain anthropocentrism in the way we think about science and the entire enterprise of discovery. It’s not the event or the phenomenon itself that counts, it’s the fact that we—a clever if sublimely narcissistic species—at last stumbled onto it.

Geneticists have been guilty of this for a while now, talking about having “discovered” the genes for this or that trait, even though the genes were there all the time and the only things that changed was that we finally looked for them. Some researchers are self-correcting—preferring to talk about “pinpointing” or “identifying” genes—but others still opt for the Christopher Columbus phrasing, if only because it makes their work sound more dramatic.

Columbus himself came in for similar revisionist thinking since, like the genes, the New World was there all along. And of course, if anyone did any discovering, it was the indigenous people who had lived there for thousands of years before the Europeans even hoisted anchor and ventured out.

Explorers have always gotten the hyperbole treatment. Ever since the mid-20th century we’ve been talking about the “conquest of space,” despite the fact that with the exception of nine trips to our nearby Moon, we’ve never gotten out of low Earth orbit. Calling that the conquest of space is a little like paddling around in Boston Harbor and saying you’ve conquered the oceans.

We do something similar with heroic accounts of “taming the continent,” something of an overstatement given that multiple centuries worth of droughts, tornadoes, earthquakes, hurricanes, dust bowls, forest fires and more have shown that the continent has retained its feral ability to bite back. We even overstate our talent for causing wholesale destruction—something you’d think we wouldn’t want to boast about. Environmentalists themselves have long warned that there’s a misplaced egotism in feel-good slogans about “saving the Earth.” The Earth will be perfectly fine, thank you very much. It’s survived multiple glaciations, asteroid hits and more in its long life and it will surely survive us, even if we temporarily toxify the place so much that the very species that created the mess—us—can’t live here anymore.

In the case of the Big Bang, it’s understandable to play up, even inadvertently, a graspable time frame like 50 years ago as opposed to a far less fathomable 13.8 billion. My colleague Michael Lemonick once playfully considered opening a story in TIME with the line, “Twelve million years ago last week a supernova exploded.” The then-science editor prudently nixed the idea—too great a risk of real misinformation leaking into the popular conversation. But the idea did speak to the way we all wrestle with the tininess of the time scales on which we live our lives compared to the vastness of the cosmic clock.

Human beings are undeniably an ingenious species. The things we’ve built, created and sussed out are genuinely remarkable. But they’re pinholes in the curtain compared to all there is to know. There’s no harm in being proud that we’re allowing some light in—just not too proud. 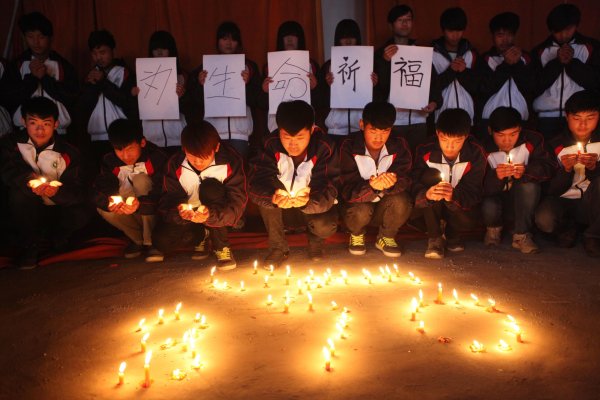 A Time to Cry
Next Up: Editor's Pick