A Coach Is Cleared of Child-Porn Charges, but His Ordeal Drags On

Todd Hoffner, the head football coach at Minnesota State-Mankato, a Division II school, can still recall that night he spent in jail. It was August 2012, and he had been arrested and charged with two felonies: using minors in a sexual performance or pornographic work, and possession of child pornography. That June, Jerry Sandusky had been found guilty of sexually abusing young boys while an assistant coach at Penn State. Colleges were on red alert, on the lookout for any sort of inappropriate contact between coaches and children.

But Hoffner knew his university—which had placed him on leave after a technician found videos of naked or partially clothed children on his Blackberry—had overreacted. And that the authorities had arrested him under false pretenses. “There was shock, fear, and I gradually worked myself towards resolve,” Hoffner says. “I set two goals for myself as I sat in that jail cell. I wanted to be exonerated from the criminal charges, and vindicated by my university.

Todd Hoffner is not a child molester. The videos on his phone were those of his own children. In dismissing the charges against him three months later, a judge labeled the videos “playful and silly.” They were taken after his kids, then ages 9, 8, and 5, had taken a bubble bath. And for the first time in two seasons, Todd Hoffner will coach the Minnesota State-Mankato football team this fall.

But Hoffner’s road to reclaiming his job, and reputation, was a borderline nightmare. And where Hoffner’s career—and the Minnesota State-Mankato football team—goes now will depend on how Hoffner, the school’s leadership and the players on the team react and adapt to circumstances that, even in the already weird world of college sports, are almost unprecedented in their awkwardness.

Because without Hoffner on the sidelines, Minnesota State-Mankato went 24-2 the last two years under interim coach Aaron Keen, and made two appearances in the Division II playoffs. Hoffner may be vindicated. But that doesn’t mean he’ll be embraced. “No doubt, there are a lot of emotions on both sides,” says Minnesota State-Mankato athletic director Kevin Buisman, who hired Hoffner in 2008. “I don’t think anyone knows what’s normal now. And it’s going to be a little while until we can define normal, or experience normal.”

Although the child pornography charges were dismissed, Minnesota State-Mankato suspended Hoffner for 20 days, then reassigned him to an administrative role. In May, Hoffner was fired for undisclosed reasons. The Mankato Free-Prees revealed that, according to an arbitrator’s report, the school accused Hoffner of viewing pornography on a work-issued computer and also allowed his wife to use the computer. Hoffner denied viewing pornography, and the arbitrator noted that other people could access the computer. The arbitrator also ruled that the use of the computer by Hoffner’s wife was not grounds for firing, and ordered the school to reinstate Hoffner as coach and repay him, with interest.

In the meantime, Hoffner had accepted a position as head coach at Minot (N.D.) State back in January. “We were down to our last few hundred dollars,” he says. “They gave us an opportunity to feed our family.” But the Hoffners had roots in Mankato, so they decided to accept his reinstatement. “The whole ordeal was the ultimate test of toughness,” Hoffner says. “Given all we went through, I think a lot of people would have surrendered.”

Hoffner returned to Minnesota State-Mankato last Tuesday. But on Wednesday, his players refused to practice, as a show of support for Keen. “That took us by surprise,” Buisman says. “We definitely turned to crisis management mode.” Says Hoffner: “The players wanted to have a voice, wanted to be heard. They were showing their loyalty to coach Keen. There’s nothing wrong with that.”

On Thursday, the players held a team meeting with Hoffner. Keen has a more personable, player-friendly coaching style than Hoffner—and over the past two seasons, that approached paid off on the field. “The overriding question from the players was, are you going to adapt to us, or are we going to adapt to you?” Busiman says. “And coach Hoffner acknowledged that it would be foolish to upset the apple cart.”

The players have returned to practice, with Hoffner doing more observing than coaching. They’ve pledged their support for Hoffner, who says he plans to meet with each player one-on-one. For now, Keen is the associate head coach, though given his success leading the Mavericks over the past two years, he’ll be scooped up as a head coach elsewhere, at some point.

“The situation is still tenuous,” Buisman says. “There’s no guidebook how to handle something like this.”

It’s public record: Todd Hoffner got railroaded in the post-Sandusky era. Minnesota State-Mankato probably wasn’t on your college football radar screen for September. Now maybe the Mavericks should be. They’ll be an easy team to root for. 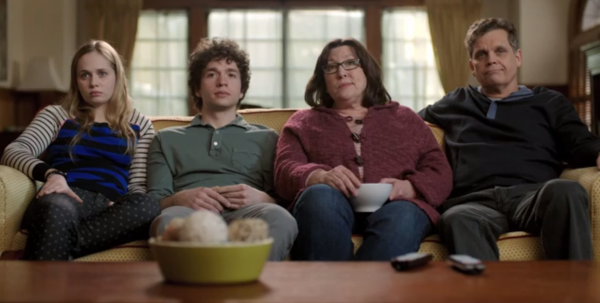 HBO Just Created the Most Supremely Uncomfortable Ads of All Time
Next Up: Editor's Pick