Boston Marathon Winds Down Without a Hitch a Year After Bombings

The Boston Marathon began winding down Monday night without incident amid heightened security measures after bombings near the finish line of last year’s marathon killed three people and wounded 264 others.

Almost 36,000 people ran in the marathon, the Associated Press reports, in what officials called a powerful display of resilience after last year’s tragedy. In one particularly uplifting scene, an unidentified participant in the day’s race appeared to collapse near the 26th mile marker only to be carried across the finish line by fellow runners.

Marathon officials went to great lengths to prevent another incident, forbidding backpacks and rucksacks, containers with more than one liter of liquid, and costumes that cover the face, CNN reports. Large signs are also banned, and unregistered runners and cyclists were no longer allowed to join the race. Surveillance cameras dotted the course and police officers were perched on rooftops.

Meb Keflezighi won the men’s race in 2:08:37, becoming the first American to win this marathon since 1983, the Boston Globe reports. Defending champion Rita Jeptoo of Kenya won the women’s race in 2:18:55, beating her winning record from last year by over seven minutes. She’s the seventh the-time winner in history, the AP reports.

Authorities accused brothers Dzhokhar and Tamerlan Tsarnaev of the 2013 bombings. Tamerlan was killed days later after a shootout with police ended with Dzhokhar running over his brother with his car. Dzhokhar is awaiting trial.

On the one-year anniversary of the marathon attack last Tuesday, police arrested a performance artist who wore a veil and screamed as he carried two rice cookers in backpacks to the site of the original explosion last year. Kevin Edson, who has a history of hospitalization and mental health issues, was arrested and held on $100,000 bail before he was sent to a mental hospital. 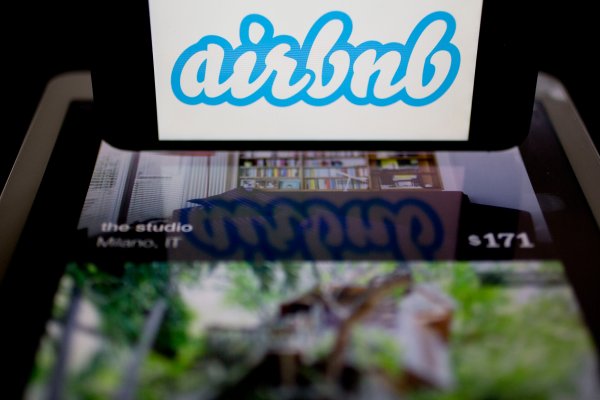 Major Reservations: Cities Are Worried About Airbnb
Next Up: Editor's Pick