Last week, when Irma Krat informed her friends in Kiev, her hometown, that she was heading to eastern Ukraine to report on the region’s separatists, some of them tried to talk her out of it. As a journalist and activist with ties to nationalism in Ukraine, Krat had played an active role in the country’s revolution this winter, one of the few women to serve in the militia forces of the Maidan protest camp in Kiev. In the eyes of the separatist forces, that would make her a target, and her friends were right to be concerned. When she arrived this past weekend in the separatist-held town of Slavyansk, in eastern Ukraine, she was almost immediately seized by armed men and taken to their security headquarters for interrogation.

She seems to be a valuable trophy for the separatists; she is the first captive they have decided to parade before the press. But she is not the only one they have taken. The detention of Ukrainian citizens in the town of Slavyansk has added a new element to the ongoing conflict in the country’s eastern regions. Apart from the armed standoff between separatists and government forces, the conflict has now become a hostage crisis, which has piled more public pressure on Ukraine’s military to take back control of eastern regions by force. But if the army does engage the separatists in battle, Russia has threatened to intervene on their behalf, potentially sparking a full-scale war in Europe that will resonate across the continent.

According to Vyacheslav Ponomaryov, the leader of the separatists in Slavyansk, his forces have detained numerous people the separatists suspect of being provocateurs or agents of the central government in Kiev. “We have captured some of their spies, their infiltrators,” Ponomaryov said at a briefing of two dozen journalists on Sunday at his headquarters in city hall. “Right now we’re working them over. They are now in captivity.” Asked by TIME exactly how many people they were holding, he said, “I will not be voicing that information at this time.”

But it did not take long for his forces to show off one of their captives. On Sunday night, about two hours after Ponomaryov’s briefing, his separatist commanders called a few journalists, including a TIME reporter, to the local headquarters of the state security service in Slavyansk, which has been under their control for about a week. They led the reporters into the courtyard, past a row of tanks and armored vehicles they have seized from the Ukrainian army, and told the reporters to stand near an iron gate.

“We have gathered you here to announce that, in the town of Slavyansk, a diehard activist of the Maidan self-defense forces, Irma Krat, was detained today,” said one of the camouflage-clad troops, who only agreed to state his first name, Pavel. “She is suspected of many crimes on the Maidan, against the Berkut [riot police] and against peaceful citizens. We therefore saw it as our right to detain her, and she will be kept in detention until we figure out her involvement in these war crimes.”

On the far side of the courtyard, a masked man in camouflage then led Krat out of a backdoor of the building and held her by the arm in front of the reporters. A few seconds later, the separatist leader Ponomaryov, dressed in his signature black hoodie and baseball cap, came marching passed the gate toward Krat, and she was led back inside. Her guards did not allow TIME to speak with her, but two Russian journalists were later led inside the building to ask her a few questions. One of them, a reporter at a major state-run news network in Moscow, said he saw her being kept blindfolded in the basement of the security building, under the watch of armed guards. “She says she’s a journalist who came here trying to see things for herself,” the TV reporter said, requesting that his name not be used. “She’s in good shape, all things considered.”

On Sunday night, another Russian channel, Life News, whose reporters were also given access to Krat, ran a report parroting the separatists’ accusations against her. “The people’s militia has stopped a provocation by the head of a Maidan cell,” read a report on the Life News website. Life News has long-standing ties to the Russian security services. “She is accused of torturing pro-Russian activists,” said the headline on its website. The footage from Life News showed Krat blindfolded in a courtyard and speaking to the Life News reporter in Ukrainian. “My job is to tell the truth,” she says. “I have no instructions to follow.”

Reached by TIME a few hours later, Krat’s close friend Oleg Veremeenko, a lawyer in Kiev, confirmed that she had gone to eastern Ukraine last week to work on a report about the separatist regions for tv-pravda.com. “She was crazy to go there,” he says. “But I couldn’t talk her out of it.” Krat’s great-grandfather, Mykhailo Krat, was a famous general of the nationalist forces that fought for Ukraine’s independence during World War II, Veremeenko says, and she has been distraught over the recent humiliations of Ukraine’s armed forces, both during the Russian occupation of Crimea last month and more recently during the standoff with separatists in eastern Ukraine.

On her Facebook page, Krat posted photos of herself over the past few days in the separatist-held town of Kramatorsk. That is where Ukrainian troops abandoned their armored vehicles and tanks to a crowd of separatists last week rather than engage them in a firefight. Her posts on Saturday night attempt to give voice to the concerns of the local separatists. “They just want to be heard,” she wrote from Kramatorsk. “They don’t want to join Russia, nor do they want to join Europe.”

That same night, just before 2:00 a.m. on Easter morning, a gunfight on the outskirts of Slavyansk left three separatists dead. According to their leader, Ponomaryov, their checkpoint had come under attack from a group of fighters from Right Sector, an ultranationalist group involved in this winter’s revolution. Although the veracity of that claim was impossible to confirm on Sunday, the shootout left the separatist forces in a state of grief and near panic throughout the day, apparently eager to hunt down any sympathizers of the revolution, in particular Ukrainian nationalists.

Krat seems to fit that description. The background image on her Facebook page shows her standing with a group of men in yellow arm bands marked with a sign resembling the Wolfsangel, an emblem associated with the neo-Nazi movement. Set against a yellow background, the black Wolfsangel is also used by the ultranationalist group Patriots of Ukraine, whose members joined the forces of Right Sector during the revolution. Although Krat’s friends deny that she has ties to neo-Nazism or Right Sector, they say she was the founder of the so-called “women’s hundred,” the only female detachment of revolutionary guards to help protect the protest camp and its barricades in Kiev. That fact, combined with her apparent sympathizes for the nationalist movement, would be enough to make her a target for the pro-Russian separatists in eastern Ukraine.

But regardless of Krat’s politics, the forces in Slavyansk have no legal authority to investigate or imprison her. Having seized power by force a week ago in this town of about 120,000 people, they have de facto control over all of its government institutions, but the central authorities in Kiev have condemned them as “terrorists.” During talks in Geneva on April 17, the U.S., E.U., Russia and Ukraine signed a declaration calling on all armed groups in Ukraine to lay down their arms and abandon the government buildings they have occupied. But Ponomaryov and his men have ignored that order. “That doesn’t concern us,” he said of the Geneva deal.

That has left Krat’s friends to seek other means of setting her free. Alexander Kudinov, a rights activist in eastern Ukraine, is attempting to contact the separatists and offer himself as a hostage in exchange for Krat’s freedom. Her friends are also preparing appeals to authorities in Europe. But they have little faith in their own government’s ability to get her back. On Monday morning, Veremeenko, her friend in Kiev, was on his way to the headquarters of Ukraine’s national security service, the SBU, to recruit their help in freeing Krat. “But that’s a formality,” he says. “I’ll file the missing person’s complain, but they can’t really do much to help. That territory is under the control of a different group of people now.” 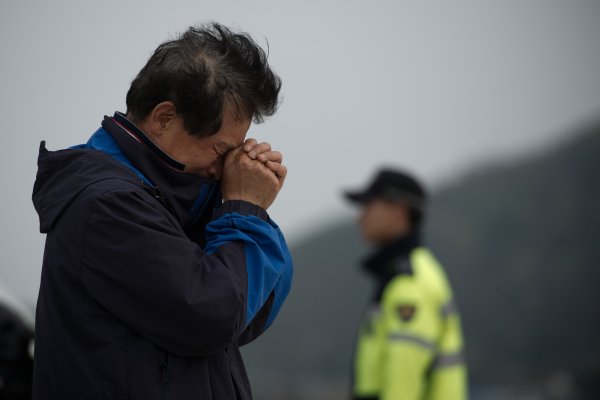