Kirsten Luce for the New York Times
By Mikko Takkunen

Actress Lindsay Lohan has revealed she suffered a miscarriage while filming her recent documentary series. Lohan, 27, broke the news during the finale of her eight-part series, which aired Sunday night on Oprah Winfrey's OWN network. "No one knows this—and we can finish after this—I had a miscarriage for those two weeks that I took off," Lohan tearfully said while reflecting on the documentary, which chronicled her life and career after rehab. "It's a very long story, but that's why on the show, when it says she doesn't want to come down, I couldn't move, I was sick. Mentally, that messes with you." She did not reveal the identity of the father. "Watching this series, I just know how I felt at that moment, and I can relate to that girl, which sounds kind of crazy," she said. "I'm like, 'Oh my God, this is really sad, who's helping her?'" [youtube http://www.youtube.com/watch?v=Jl1ja02rz0Y]
Kirsten Luce for the New York Times

Jeff Brown: Bar Regulars (NYT Magazine) This Is Who Rules the Bars of New York

Federal investigators and airline authorities are baffled after a 16-year-old boy reportedly survived in the wheel well of a flight from San Jose, Calif., to Maui, in Hawaii, on Sunday. According to officials, the teenager had fled his home in Santa Clara, Calif., after quarreling with his family and jumped the fence at San Jose International Airport, where he slipped into the wheel well of a Hawaiian Airlines flight bound for Maui. Despite the icy temperatures and dearth of oxygen, the boy survived the trip and was found wandering around the airport grounds in Maui more than five hours later when the aircraft landed. "Kid's lucky to be alive," FBI spokesman Tom Simon told the Associated Press. "He was unconscious for the lion's share of the flight." The teenager was later released to child-protective services. No criminal charges have been filed. [AP]
Sebastian Liste / Reportage by Getty Images

Sebastian Liste: In The Wake Of Chavez (Reportage by Getty Images)

John D. McHugh: Observe The Sons of Afghan Marching Towards The War (Reportage by Getty Images)

One of pizza’s most divisive flavors, Hawaiian pizza (topped with pineapple and ham) was invented far from its namesake islands by a Greek pizza maker in Chatham, Ontario in the 1960’s. Its wonky popularity foreshadowed future strange hybrid hits like Buffalo chicken and barbecue chicken pizzas, all widely available on menus as pedestrian as Domino’s.
Sebastião Salgado / Amazonas / Contact Press Images

Hatem Moussa: How to Make Charcoal in Gaza (TIME)

Stephen McLaren: Wading into weirdness on the street (NYT Lens)

I'm not much for anniversary retrospectives concerning classic video game systems. Not that there's zero value in examining history, but the older a console gets, the more it feels like we're recycling the same factoids every time a gaming system reaches another large, round number. So it goes with the Nintendo Game Boy, which launched in Japan on April 21, 1989. In case your memory is foggy from the last round of retrospectives five years ago, you'll find more look-backs around the Internet on today's 25th anniversary. (Jeremy Parish's write-up for USGamer is pretty good.) Personally, I prefer to let the above video do all the talking. That little start screen is all I need to unlock a trove of memories, from stuffing too many cartridges into my carrying case at home to slumping in the corner of a dingy gym next to my best friend, playing Teenage Mutant Ninja Turtles: Fall of the Foot Clan while his mom Jazzercised. Happy 25th anniversary, Game Boy.
KCNA / AFP / Getty Images

The Discovery Channel has canceled plans to air a live jump off the summit of Mount Everest following an avalanche that killed at least 13 people on the mountain last week. "In light of the overwhelming tragedy at Mount Everest and out of respect for the families of the fallen, Discovery Channel will not be going forward with Everest Jump Live," the network said on its website. "Our thoughts and prayers go out to the whole Sherpa community." Jumper Joby Ogwyn was already on site preparing for the televised event to air on May 11 when an avalanche killed a group of Sherpa guides and support staff in the deadliest day in the mountain's history. Ogwyn was unharmed. The Discovery Channel had planned several hours of programming around the jump and hoped it would be a ratings draw, the Associated Press reports. The Sherpa community is currently threatening to boycott the upcoming climbing season unless the Nepalese government provides more compensation to the families of those killed and injured. Three people are still missing.
George Strock / Time Life Pictures / Getty Images

Photo That Was Hard to Get Published, but Even Harder to Get (NYT Lens) One of the most significant war photographs in American history is routinely taken for granted.

At War with the Obvious: Photographs by William Eggleston (Photo Booth)

The girl in the 2011 Afghan bombing photograph (The Independent)

Photojournalists Move To Instagram, From Syria to Sandy (American Photo)

NYT’s front-page Instagram: Maybe not the end of photography (Poynter)

The Guide: April 2013 Edition (LightBox) TIME LightBox presents a new monthly round-up of the best books, exhibitions and ways to experience photography beyond the web

The month in photography (The Guardian) New exhibitions and books by William Eggleston, Sebastião Salgado, Kitra Cahana and Pieter Hugo are featured in this month’s guide to the best photography around the world.

Someone I Know (Someoneiknow.net) Project bringing together some of the best known emerged and emerging photographers from across the globe. The brief for the photographers was to take a portrait of someone they know, no matter how loosely.

From Desert to City: A Photographer Unveils Forgotten Stars (LightBox)

A Look at the Pristine: Walter Niedermayr’s Aspen Series (LightBox)

Crowd-Sourcing, Part One: Ask And You Shall Receive (NPPA)

The Photographer’s Guide to Copyright (PhotoShelter)

Can 20×200 Be Saved? Anger From Collectors Mounts as Leading Art Site Flounders (Artinfo.com)

The Day MLK Was Assassinated: A Photographer’s Story (LIFE) On April 4, 1968, LIFE photographer Henry Groskinsky and writer Mike Silva, on assignment in Alabama, learned that Martin Luther King, Jr., had been shot at the Lorraine Motel in Memphis. The two men jumped into their car, raced the 200 miles to the scene of the assassination

Camera Finds Way Back to Owner After Drifting 6,200 Miles from Hawaii to Taiwan (PetaPixel)

The new war poets: the photographs of Adam Broomberg and Oliver Chanarin (The Telegraph)

Makoko exhibition opens a window on a Nigerian world (The Guardian)

Mike Brodie (Guardian) On his freight train photographs: ‘It’s a romantic life, at least in the spring and summer’

Farzana Wahidy (NPR) How A Female Photographer Sees Her Afghanistan

It can be a bit embarrassing to admit that Field of Dreams, which came out 25 years ago today, is one of your favorite movies. Not Blues Brothers 2000 levels of embarrassing, but embarrassing enough; Field got a best-picture Oscar nom, but it's also got a reputation for being super cheesy. And, despite that reputation, there's no way to love the movie any way other than sincerely. Field of Dreams is, after all, one of the most sincere movies ever made. It's sincere about what it means to have a dream that never came true and what it feels like when that dream comes up to bat and what it feels like when that dream is about baseball, the sport that gives you time to look for metaphors while you wait for the next play. But "sincere" doesn't actually have to mean "sappy" — and, as someone willing to go public with the fact that the movie is on my personal favorites list, Field of Dreams is looking less sappy than ever. That's because, on revisiting the movie in honor of it's quarter-century anniversary, a scene I once overlooked now seems like the most important one of all. I can't remember the first time I saw Field of Dreams, but I fell for it during endless TBS airings. It was one of those movies you could pick up at any point in the plot but couldn't stop watching once you started. Here's how I'd retell the plot, based on memory alone: Iowa farmer Ray Kinsella hears a voice; he plows under his corn to build a baseball diamond; he thus summons the ghosts of the Shoeless Joe Jackson and the Chicago Black Sox; he hears another voice telling him to go find reclusive writer Terence Mann; while at a Red Sox game with Mann, they see the words "Moonlight Graham" on the scoreboard; later, they pick up a hitchhiker who turns out to be Moonlight Graham, a ballplayer who played one game and had zero at bats; returning to Iowa, Ray finds that his farm is about to be foreclosed on because of the loss of corn from the baseball; when Ray's daughter almost chokes, the ghost of Graham, who became a doctor after playing baseball, saves her; the day is saved when the baseball diamond becomes a paying attraction for people who share Ray's baseball dreams. What's missing is the sequence between Fenway and the hitchhiker, when Ray and Terence Mann try to chase down Graham in the present day and find that he died. While visiting Graham's hometown, Ray finds himself transported back to 1972, where he meets Graham — who by then had given up baseball to become a small-town doctor. It's perhaps the weirdest scene in a movie full of weird scenes, the most unexplained moment in a movie that doesn't bother to explain any of the mechanisms of any of its magic. "Baseball" is enough of an explanation for voices and ghosts and fate, which is all well and good. But those things happen to Ray within the real world. This scene is the one moment when Ray's the person who leaves reality, who travels through time. It's an anomaly, shoehorned into a plot that's otherwise consistent in its use of the supernatural. [youtube=https://www.youtube.com/watch?v=Y9yrupye7B0]
Andrea Bruce / The New York Times

Upcoming Deadlines for Grants, Fellowships Up to $10,000 (PDN)

Mikko Takkunen is an associate photo editor at TIME.com. 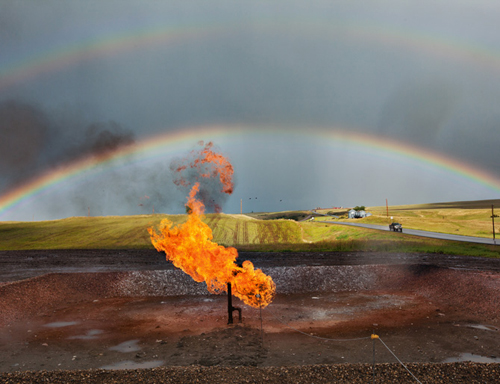