A relative weeps at an area where family members of victims of the South Korean ferry 'Sewol' are gathered, at Jindo harbour on April 21, 2014.
Nicolas Asfouri—AFP/Getty Images
By Emily Rauhala

South Korea wants answers. Five days after a ferry sank off the country’s southern coast, the nation is waiting for information about the fate of those on board, and the cause of the disaster. A transcript of the ship’s communication with the shore, released Sunday, provides a partial glimpse into what transpired after the Sewol took a sharp turn, listed, then sank last Wednesday morning. Though much is still unclear, the exchange suggests a chaotic scene as crew members weighed whether or not to evacuate the ship.

The 6,825-ton ferry set off April 15 from the port city of Incheon, near Seoul, making its twice-weekly overnight journey to the resort island of Jeju. The Japan-made vessel was carrying 476 people, including 350 high school students on a class trip. Just before 8:55 a.m. on April 16, the ship sent a distress signal. “Our ship is in danger,” a crew member said. Two hours later, it was nearly submerged. One hundred and seventy four people survived. As of Monday evening, local time, 64 are confirmed dead and 240 remain missing.

At some point after the ship began to list, survivors say, passengers were told to stay below deck. Captain Lee Jun-seok told South Korean media he worried that the cold water and swift currents made evacuating the ferry too risky. A crew member told controllers that people were unable to move and that the boat’s internal broadcast system was down. But they also repeatedly asked traffic controllers on shore if passengers who abandoned ship would be rescued immediately.

“The coast guard will arrive in 15 minutes; please tell your passengers to wear life jackets,” emergency dispatchers told the ferry about 30 minutes after the initial call.

“We have lost our ability to broadcast our messages,” the ship responded.

“Even if you can’t use your speaker, do your best to go out and ensure that your passengers wear life jackets or thick clothes,” dispatchers said.

“If our passengers evacuate, will they be immediately rescued?” the ship asked.

“Let them float even with life rings. Hurry!” urged the dispatcher, adding that “the captain should make a final decision.”

Lee survived, as did most of his crew. Lee faces jail time for abandoning ship; several crew members have also been detained.

On Monday, President Park Geun-hye lashed out at the ferry’s crew, calling their actions “unforgivable” and “murderous.” They “told the passengers to stay put but they themselves became the first to escape, after deserting the passengers,” she said at a Cabinet meeting. “Legally and ethically, this is an unimaginable act.” Chosun Ilbo, a South Korean newspaper, echoed the sentiment, saying the transcripts revealed “negligence” on the part of the coast guard and Sewol’s crew.

Some family members, meanwhile, put the blame on Park’s government, accusing officials of giving parents inaccurate information and botching the search-and-rescue effort. Last week angry relatives threw water bottles at the Prime Minister and shouted at Park. On Sunday about 100 people vowed to march from South Korea’s southern coast, where they have gathered to wait for news, to the President’s official residence in Seoul, reports the Associated Press. They were eventually stopped by police officers. As they pushed against the barricade, some yelled “The government is the real killer!”

In the cold water off the country’s southern coast, divers spent the weekend and Monday trying to get inside the vessel. Bodies pulled from the water were ferried to Jindo island, where family members huddled near at the shoreline, eyes fixed to the sea. They are desperate to know what happened. But five days in, with no sign of survivors, they are bracing for bad news. 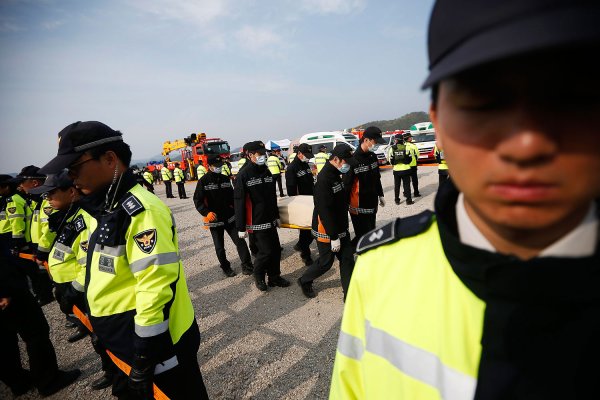 Ferry Death Toll Rises to 64
Next Up: Editor's Pick