10 Cities Where Americans Are Pretty Much Terrified to Live

In a number of metro areas, however, far fewer residents felt safe at night. In McAllen, Texas, where Americans were least likely to feel safe, less than half of all respondents were comfortable outside of their homes after dark. Based on data gathered by the Gallup-Healthways Well-Being Index, these are the 10 cities where Americans felt the least safe.

But not all metro areas where residents felt unsafe had high violent crime rates. In two metro areas, McAllen and Yakima, Wash., there were just 319 and 349 violent incidents, respectively, for every 100,000 residents in 2012. In both cases, this was below the national rate.

24/7 Wall St. discussed the issue with John Roman, senior fellow at the Urban Institute, a nonpartisan think-tank based in Washington, D.C. “A fact of modern life [is] that people are bombarded with negative stories about crime,” Roman said. People “develop the perception that where they live, or wherever they like to go, isn’t safe.”

While concerns about safety may be somewhat misplaced in some areas, in others, such “perceptions of feeling unsafe are right on,” Roman added. In those areas, residents may feel unsafe because crime is underreported. In immigrant communities, because “people who are victimized are afraid to come forward and report it, there’s a hidden number of crime,” Roman explained.

However, in bigger cities, like Washington, D.C., New York and Dallas, “immigrant populations are thriving because they can do business with the local governments in Spanish. Those cities that are attracting a lot of first and second generation immigrants have really much lower crime rates than you’d expect,” said Roman.

Residents of areas who are less likely to feel safe tended to also struggle to afford adequate shelter. According to Gallup, the relationship between the concerns for personal safety and being able to afford housing is not coincidental. “The factors that contribute to both of these problems are often rooted in socioeconomic status and are likely traced back to poverty and the discontent that comes with it,” Gallup noted.

In fact, these areas also suffered from high poverty rates. Each of the 10 had a poverty rate greater than the national rate in 2012. In Fresno, Calif., and McAllen, 28.4% and 34.5% of the population lived below the poverty line that year. Both were among the highest rates for any metro area in the country.

However, Roman noted that the state of the local economy is often “less related than you might think it might be” to perceptions of safety. Instead, perceptions of where an area is heading might be more important. Certain parts of the country that are improving “might be poorer than average, but there’s a sense of optimism, there’s a sense of development,” he explained.

To determine the 10 metro areas where people felt most unsafe walking alone at night, 24/7 Wall St. reviewed figures from the Gallup-Healthways Well Being Index. Responses were collected for the index over 2012 and 2013. To determine how recorded crime rates actually aligned with citizens’ opinions of these areas, we considered figures published in the FBI’s Uniform Crime Report for 2012. Unemployment rates are from the Bureau of Labor Statistics for December 2013 and are seasonally adjusted. Other figures such as poverty rates, education and income are from the Census Bureau’s 2012 American Community Survey. Population figures are from 2012 as well.

These are the cities where Americans don’t feel safe.

With relatively high crime rates, Modesto residents are not likely to feel completely at ease walking alone at night. Motor vehicle theft was particularly bad in the area, with more than 780 incidents per 100,000 residents in 2012, second worst nationwide. Like many metro areas where people feel unsafe, Modesto’s economy has been strained in recent years. The unemployment rate was an abysmal 12.3% at the end of last year, among the highest rates nationwide. More than one in five residents lived in poverty in 2012, also among the highest rates in the nation. More than 14% of respondents said they had enough money for shelter at all times in the past 12 months, among the worst rates in the country.

Like in many of the cities in which people do not feel safe, 14.8% of Columbus residents said that they did not have enough money for adequate shelter within the past year, among the 10 worst rates in the country. A high percentage of people in the area struggled economically. The area’s median household income was less than $43,000 in 2012, versus more than $51,000 nationwide. Additionally, the area had one of the nation’s highest portions of residents on food stamps, at 20.6% that year. The region also had 166.3 robberies per 100,000 people in 2012, among the highest rates in the nation, and 4,778.6 property crimes per 100,000 people, worse than all but just five other metro areas in the country.

Stockton had 889 incidents of violent crime for every 100,000 residents in 2012, higher than all but a handful of metro areas nationwide. That year, there were 89 murders, or 12.7 per 100,000 residents, among the highest rates in the nation. Cases of aggravated assault and robbery were also extremely frequent. Violent crime was such a problem in Stockton that year that the city’s police declared a policy of immediately dispatching officers only in cases of violent crimes and crimes in progress. The city of Stockton, which is currently working on plans to exit from bankruptcy, has lost police officers in recent years due to a combination of layoffs and retirements. At the end of 2013, 12% of the area’s workforce was unemployed. While this was down from 16% two years before, it was still among the worst unemployment rates in the nation.

While Yakima residents often felt unsafe walking home alone at night, the area’s violent crime rate was actually lower than the national rate. Property crime, however, remains a problem. Despite Yakima County’s Crimestoppers grassroots organization, which encourages citizens to report crimes, the area had 1,217.7 burglaries per 100,000 people in 2012, and 673.2 car thefts per 100,000 people, both among the highest rates in the country. Like most metro areas in which residents do not feel safe walking alone at night, Yakima is struggling economically. Nearly one-quarter of the area’s residents had to rely on food stamps for at least part of 2012, and 23.1% of residents lived in poverty in 2012 — both among the worst rates in the country.

McAllen was the only metro area in which less than half of all respondents felt safe walking home alone at night. This was despite the fact that McAllen actually had a lower violent crime rate than the United States overall in 2012, at just 319 incidents per 100,000 residents, versus 387 crimes for 100,000 residents nationally. However, violence along the border with Mexico remains a concern for many McAllen residents. The State Department warns against traveling to the neighboring city of Reynosa, Mexico, due to high levels of drug-related violence. Additionally, nearly 25% of residents stated they did not have enough money for adequate shelter at some point in the previous year, by far the most of any metro area. A lack of adequate shelter may be tied to the relatively low economic prosperity in the region. In 2012, 34.5% of residents lived below the poverty line, and the median household income was just $33,761, both among the worst in the nation.

More from 24/7 Wall St.
The Most Educated Cities in the World

The Happiest Countries on Earth 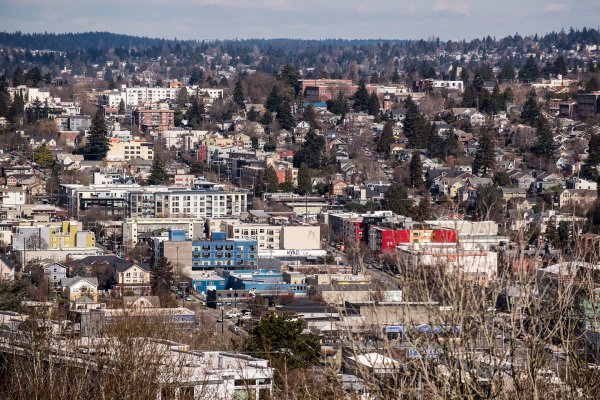 The American Dream Remains Inaccessible for Many Black Americans. Here’s How We Can Fix That
Next Up: Editor's Pick