“President Putin has a dream to restore the Soviet Union,” said Yatsenyuk. “And every day, he goes further and further. And God knows where is the final destination.”

In an interview to be aired Sunday on NBC’s Meet the Press, Yatsenyuk pointed to President Putin’s influence in Ukraine, where Russia’s geopolitical interests appear to have contributed to mass unrest. Russia annexed the Ukrainian region of Crimea in March, after Ukraine deposed its pro-Kremlin President Viktor Yanukovych. Tens of thousands of Russian troops remain amassed on the border, emboldening separatist groups who have taken over government buildings in the eastern cities of Ukraine.

Yatsenyuk highlighted Putin’s supposed nostalgia for the Soviet Union, citing Putin’s proclamation in 2005 that the collapse of the Soviet Union was the “greatest geopolitical catastrophe” of the 20th century.

Ukraine has launched operations against pro-Kremlin separatists occupying buildings in eastern Ukraine, but has called a truce for Easter.

The Ukrainian Prime Minister also had some harsh words for what he called the “bastards” apparently seeking to impose a tax on Jews in Donetsk, eastern Ukraine. (The alleged author of the fliers has told Russian media that they are fakes, and other Ukrainian separatists told TIME they are a “sophisticated trick.”)

“We got information that these so-called peaceful protesters with light ammunition in their hands, that they sent a number of bulletins saying that everyone who is a Jew to be indicated as a Jew,” said Yatsenyuk. “And today in the morning, I made a clear statement urged Ukrainian military and security forces and Ukrainian Department of Homeland Security urgently to find these bastards and to bring them to justice.” 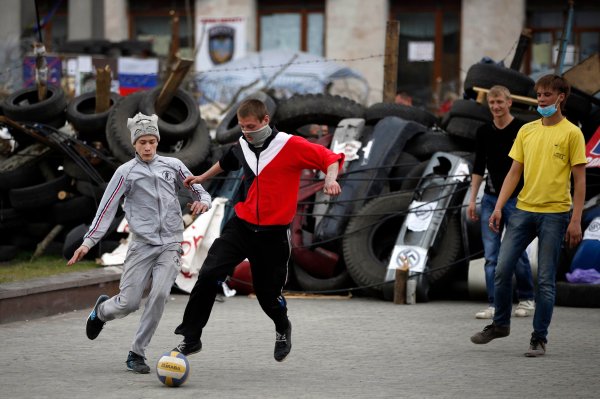 Donetsk Greets the Ukraine Crisis With a Shrug
Next Up: Editor's Pick