A former CIA director has called them “our worst nightmare.” A 2005 study found that just one could blow a $15 billion hole in the world economy. And the Obama Administration is thinking about sending them to Syria.

They are shoulder-fired antiaircraft missiles, capable of knocking helicopters and low-flying planes out of the sky. Syria’s rebels and their Arab government backers insist those weapons could decisively reverse the momentum in Syria’s three-year civil war, which may recently have shifted in favor of Bashar Assad’s regime.

“The introduction of manpads could be a game changer in Syria, like it was in Afghanistan in the 1980s with Stinger missiles,” an Arab official tells TIME, adding that he believes the Obama Administration has begun discussing the idea more seriously. Other sources say the issue is being debated at the White House but that strong doubts remain about the wisdom of providing missiles to the rebels.

The issue is newly relevant amid recent reports that Syrian fighters are now using U.S.-made antitank weapons against Assad’s forces. Experts say it’s unlikely those weapons could have wound up in Syria without U.S. approval. Nor are they likely to shift the military balance in the conflict.

Antiaircraft missiles might. For a President unwilling to intervene directly in a conflict that has claimed upwards of 100,000 lives, they might seem an easy and inexpensive way to force out Assad. The Syrian dictator has employed his air supremacy to bomb rebel outposts, resupply isolated forces and force civilians to evacuate pro-rebel areas through terrorizing bombardments.

But supplying the lightweight missiles would involve huge risk. Senior Administration officials worry that the weapons — known technically as man-portable air-defense systems, or manpads — could fall into the hands of terrorists intent on shooting down a civilian airliner. Syria’s rebel forces are now dominated by radical Islamists, some of whom recently overran headquarters used by a moderate faction and looted weapons stored there.

Even hardened national-security officials blanch at the thought of al-Qaeda with manpads. It was former CIA director David Petraeus who called that scenario a “nightmare” in January. A 2005 Rand Corp. study found that the shooting down of a civilian airliner might temporarily freeze air travel worldwide and produce total economic losses of more than $15 billion. That’s why, in the chaos following the 2011 fall of Libyan dictator Muammar Gaddafi, the U.S. State Department frantically hunted down loose manpads from his arsenal, while Petraeus’ CIA reportedly conducted a parallel effort.

Even so, some influential voices in Washington think the risk is worth taking. In a recent interview with TIME, Arizona Republican Senator John McCain singled out the Assad regime’s use of “barrel bombs,” crude explosive devices pushed out of helicopters whose primary function seems to be killing civilians. “I want to shoot them down,” McCain said. “To stop these atrocities, I’m willing to take the risk of a manpad … falling into the wrong hands, because we’ve got to stop it.”

Obama officials are only willing to accept that risk, according to a congressional aide familiar with the issue, if they can gain far more confidence in measures to control and monitor the weapons. That could involve supplying missiles in very small quantities — perhaps one or a few at a time — to carefully vetted rebels who would present videotaped evidence of their use before resupply, an approach proposed by Saudi officials, who would likely be the conduit for any transfer of the U.S.-made weapons. The catch here is that supplying manpads in small numbers will have little strategic impact, while larger quantities raise the risk that one will fall into the wrong hands.

Obama officials also want something more reliable than human oversight. They are exploring the potential for GPS tracking and remote “kill switches” that could render the manpads useless beyond approved areas. “The Administration is thinking through this, but they’re fairly skeptical,” says the aide. “How do you do a kill switch that someone on the ground can’t undo?”

One former top Bush Administration national-security official recently told TIME that it’s possible to restrict the lifespan of manpads, standard versions of which can function for 20 years or more. “You can build obsolescence into manpads,” the official said. Anthony Cordesman, a military expert at the Center for Strategic and International Studies, who has proposed “a time clock” that can disable the weapons unless it is continually reset by a changing code, said in an interview this week that he was unaware of such technology being implemented.

But that may be changing: a security analyst told the Wall Street Journal that some of the new antitank missiles in Syria bear a “complex, fingerprint-keyed security device that controls who fires it.”

Such technological advances don’t answer the question of whether manpads can save the day in Syria. While some experts concur that they could be a “game changer” — terrorism specialist Charles Lister of the Brookings Institution used that very phrase in a recent interview with Public Radio International — that’s not a consensus view in Washington.

“Manpads alone would not play a decisive role,” Cordesman said. “They would limit helicopter movement and the use of aircraft, but that might provoke the use of Syrian artillery. It’s not clear that’s a good trade-off.” Experts also say the effectiveness of manpads would depend on whether the U.S. provided advanced models, how well rebels using them were trained and the larger ability of fractious rebel forces to take coordinated advantage of their new battlefield asset.

Even McCain seems to acknowledge that manpads would have a primarily humanitarian use, as a defense against helicopter-borne barrel bombs. And for now at least, that’s not reason enough for Obama to risk a $15 billion nightmare. 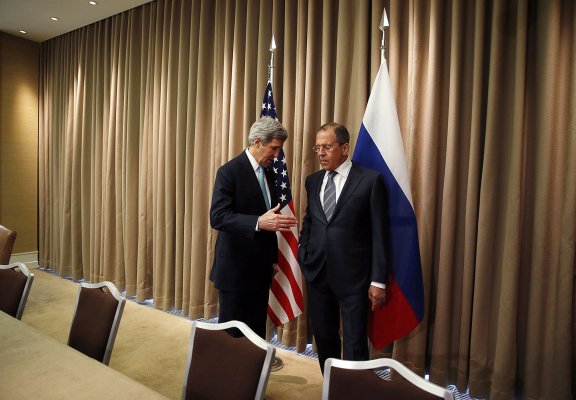 Ukraine Deal in Trouble
Next Up: Editor's Pick