Exclusive: Sochi's Gays Had Protection From the Mayor Who Claimed They Don't Exist

Performers Penelopa, right, and Veranda, left, get ready backstage before a performance at the Mayak cabaret, the most reputable gay club in Sochi, Feb. 8, 2014.
David Goldman—AP
By Simon Shuster

In early January, about a month before the Winter Olympics in Sochi began, Andrei Tanichev, the owner of the city’s only gay night club, got a call from the local government summoning him to a meeting with the mayor. It did not sound promising. Just a few days earlier, a special security regime known as the “ring of steel” had put Sochi authorities on high alert for any Olympic disruptions. And although Tanichev is a businessman, not an activist, Russia’s new law against homosexual “propaganda” among minors had thrust his cabaret into a legal grey zone. He went into the meeting prepared for the worst.

What he got was a supporting role in Russia’s gay Potemkin village. While gay rights activists in other parts of Russia have continued to face court appearances and fines even during the Olympic Games, the gay community in Sochi has been put under the state’s protection, at least while the eyes of the world are watching. In his office that day in January, Mayor Anatoly Pakhomov, the Kremlin’s plain-spoken Olympic enforcer, welcomed his guest with a smile. “It was weird,” recalls Tanichev. “He was super nice, really pleasant.”

After asking about the sanitary conditions at the club, which is called Mayak, or Lighthouse, the mayor inquired if there were any problems he could help resolve, and Tanichev said that the luxury hotel being built next door had dumped all kinds of trash in the neighborhood. It was a lot like the complaint Pakhomov had faced in April during a town hall meeting of his constituents, who were up in arms over the felling of trees to make way for Olympic sites. “Anybody who doesn’t like it,” Pakhomov yelled at that packed auditorium, “had better calm themselves down or move away. End of story!”

But with the owner of Mayak he was much more obliging. The week of their meeting, Tanishev says the mayor sent an official to get the trash problem cleared up. “They didn’t publicize it at all,” he says. “I guess they were trying to keep it quiet.” That seems to have been the mayor’s approach to the issue of gays in his city. During an interview with the BBC in December, he said he was not aware of any homosexuals living in Sochi at all, although he later insisted that he was only talking about an absence of gay activists. Since early January, Pakhomov has declined numerous written requests for an interview with TIME, citing his busy Olympic schedule. But his spokesman, Mikael Nersesyan, confirmed that the mayor’s meeting with Tanichev “probably” took place. “If Tanichev says they met, then yes, they probably met,” he says. “The mayor meets with dozens of people a day. There’s nothing abnormal about it.”

As the Olympics grew closer, the government’s pampering did start to seem like the norm for Mayak. During a routine inspection late last year by the Federal Drug Control Service, Russia’s version of the DEA, Tanish says the agents didn’t even go past the doorway before giving Mayak a pass. Had they been a bit less squeamish, they could have stuck around for the nightly drag show, which features a Lady Gaga lookalike and plenty of audience participation. The decor inside is posh but tasteful (Tanichev, whose partner of many years helps run the club, has a degree in design), and the clientele is not shy about public displays of affection even when the foreign news cameras are rolling all around them.

Reporters from all over the world have become a fixture at Mayak in recent months, all eager to cover the impact of Russia’s anti-gay legislation. But in all the dozens if not hundreds of interviews he’s given lately, Tanichev says he neglected to mention his meeting with the mayor. “Nobody asked,” he says. His message, which reporters have asked him to repeat on a nightly basis for months, is that gay rights are doing just fine in Sochi, which had a thriving gay community even in Soviet times, when sodomy was technically against the law. That also seems to be the message local authorities want to transmit to the world: everything is rosy, please move along. “They are scared to cause some kind of scandal,” says Tanichev. “You have to remember these guys are from the provinces. They’ve never dealt with gay issues before. And all of a sudden they have these reporters talking about LGBT this and transgender that.”

The public signals coming from Moscow have only seemed to confuse them further. In his most recent remarks on the subject last month, President Vladimir Putin said that homosexuals “should feel relaxed and calm” in Sochi during the Olympics. But in the same breath, he seemed to suggest that foreign gays were out to prey on Russian kids. “Just leave the children alone, please,” Putin told them.

With all that, officials in Sochi have begun to feel “unsure what side they’re playing on,” says Tanichev. “The law says one thing. Putin says another. Of course their instinct is to make as little noise as possible around this issue.” So it is no surprise that the headlines in the western press have recently painted the city of Sochi, and in particular the Mayak night club, as a living rebuke to Putin’s anti-gay legislation. But the gentle touch of the local authorities have not extended very far outside of Sochi’s city limits.

On Jan. 31, a week before the Winter Olympics began, authorities in the Ural Mountains city of Nizhny Tagil, part of Russia’s industrial heartland, used the gay propaganda law to shut down the only organization in the country that councils gay teenagers through the process of coming out. Elena Klimova, who founded the Children-404 center last year and coordinates its 14 volunteer psychologists, was charged for posting information on her social networking page that “promotes non-traditional sexual relations among minors,” according to her subpoena, which she sent to TIME via e-mail. The document goes on to charge that Klimova’s work was aimed at spreading “skewed ideas about the social equality between traditional and non-traditional sexual relations.”

The charges, she says, refer to the letters from Russian teenagers that she has posted on her Facebook page as a solace to others. They make for heartbreaking reading. In one of them, posted earlier this month, a 19-year-old woman describes how her parents tied her up and invited a stranger to rape her after they learned of her lesbian relationship. The assault, which her parents believed would “cure” her of homosexuality, resulted in pregnancy, the woman wrote, but police have ignored her attempts to file charges. This month, when Klimova stands before a Russian court, she faces a fine worth several thousand dollars for posting such stories online. In an email to TIME, she wrote that the law being used to prosecute her “has directly given free rein to many homophobes. It officially declares that gays and lesbians are inferior beings… That truly amounts to fascism.” And as far as she’s concerned, there is not much comfort in the fact that gay clubs are allowed to operate freely in some Russian cities. “Any gay club amounts to a ghetto,” Klimova says. “And it doesn’t at all mean that gays in Russia have it good.”

Over drinks at his night club, Tanichev says he agrees. The easy ride Mayak has gotten amid Russia’s Olympic posturing does not change the fact that the government seems to be nudging society in a very hateful direction. “I often think about where we’re heading as a nation,” Tanichev says while the drag queens in the make-up room are preparing for the night’s cabaret. “Sometimes it seems like we’re rolling backwards toward some kind of theocracy,” he says. The walls of the room around him sure don’t make it seem that way. They are covered with giant photos of almost-naked men. But the view from Mayak, and from Sochi, is deceptive. 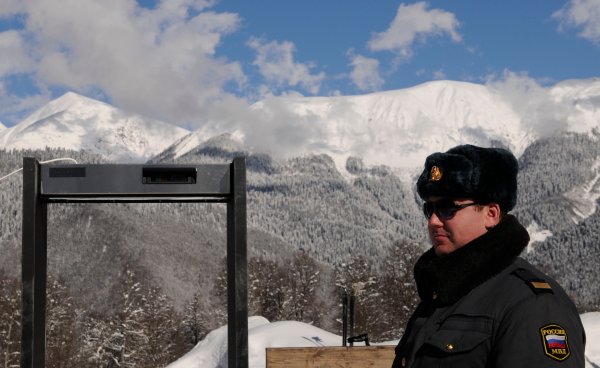 Sochi Flaunts Its Answer to the Alps and Nobody Shows
Next Up: Editor's Pick