The 600 Years of History Behind Those Ukrainian Masks

The reporter asked the masked pro-Russian separatist in the Ukrainian city of Slavyansk a simple question: why are you wearing a mask?

It sure is for anyone who pays attention to how Russia fights.

The mask-wearing militants who have appeared in eastern Ukraine and taken over government buildings represent the latest face of Russia’s tradition of maskirovka (mas-kir-OAF-ka). It’s a word literally translated as disguise, but Russia has long used it in a broader sense, meaning any military tactic that incorporates camouflage, concealment, deception, disinformation—or any combination thereof.

It describes everything from manufacturing tanks in automobile factories to shielding them under tree branches near the battlefield. It can be used to hide soldiers with smoke screens, and to build warships under awnings. It includes sending soldiers in white uniforms to invade snowbound Finland during World War II and creating mock weapons and bridges in hopes of drawing enemy fire away from the real thing.

The Soviets bought 100mm artillery pieces from Germany before the war. The Germans cranked the Russians’ use of those guns in their planning on how to invade Russian as part of Operation Barbarossa. But when the Germans invaded the Soviet Union in 1941, the Soviets surprised them with much more powerful 130mm guns. In a classic maskirovka move, the Russians had scrapped the guns they bought from Germany as they built their own bigger weapons.

Maskirovka (which is rooted in the English word, mask) is designed to sow confusion and frustration among opponents by denying them basic information.

A pro-Russian protester mans a barricade outside a government building in Donetsk.
Konstantin Chernichkin / Reuters

The anonymous troops in eastern Ukraine say only that they’re “Cossacks,” but Ukrainian and Western officials believe many of them are led by Russian special forces. Yet the murkiness of their origin and sponsors inflates their menace, and makes it more difficult to figure out how to deal with them. Snipping puppet strings between Ukraine and Moscow may be easier than controlling indigenous separatists operating independently. A combination of both complicates matters still further.

“It’s hard to fathom that groups of armed men in masks suddenly sprang forward from the population in eastern Ukraine and systematically began to occupy government facilities,” U.S. Air Force General Philip Breedlove, NATO’s top commander, said Thursday. “It’s hard to fathom because it’s simply not true. What is happening in eastern Ukraine is a military operation that is well planned and organized and we assess that it is being carried out at the direction of Russia.”

“Maskirovka may be conducted in any environment to deny information to sensors,” a 1988 Pentagon study of the technique said. What’s on display in Ukraine is maskirovka in its most basic form: physical masks, known as balaclavas (named for their use at the Battle of Balaclava, a Ukrainian town near Sevastopol, during the Crimean War) are designed to deny humans’ most fundamental sensor—the eye—critical information about the person on the other side (to complicate matters, some Ukrainian supporters also are wearing masks).

If the West won’t come to Ukraine’s aid even if columns of Russian tanks are streaming toward the capital of Kiev, they’re sure not going to lift a (trigger) finger against masked men operating in the shadows.

Think of it as a crafty way of getting your way. Russia is conducting a slow-motion invasion of Ukraine without thousands of troops riding hundreds of tanks. Instead, handfuls of Russian agents are whipping up nationalistic fervor among disgruntled eastern Ukrainians of Russian stock. Beyond the masks, the “troops” wear no insignia to betray under whose flag they’re acting.

It used to be that states waged wars. But since the end of the Cold War, so-called “non-state actors”—like al Qaeda—have loomed large. Now on the streets of Ukraine, non-state actors are acting on behalf of a state.

Maskirovka, Russian military texts say, must be seamless and complete. The Soviet Union used it to sneak their nuclear-tipped missiles into Cuba in 1962. But the Soviets didn’t bother to conceal the construction of their launch sites, which led U.S. intelligence to figure out what was happening.

Some Russian scholars say maskirovka dates back to the 1380 Battle of Kulikovo Field, 120 miles south of Moscow. Russian Dmitri Ivanovich divided his mounted fighters into two groups: one stood in the open field, vulnerable to attack from the Mongols’ Golden Horde, while the second hid in a nearby forest. Seeing only the Russians on the plains, the Horde’s soldiers attacked, only to be overwhelmed when the second Russian force rushed from their hiding place.

“The Soviet Union has developed a doctrine of `maskirovka’ which calls for the use of camouflage, concealment and deception (CC&D) in defense-related programs and in the conduct of military operations,” Reagan wrote in October 1983’s National Security Decision Directive 108. “Several recent discoveries reveal that the Soviet maskirovka program has enjoyed previously unsuspected success and that it is apparently entering a new and improved phase.” The Top Secret document, declassified by the U.S. government three years ago, didn’t detail those successes.

Fast-forwarding to today, how can the West combat Russia’s penchant for maskirovka in Ukraine? Seeing as some credit Reagan for prevailing in the original Cold War, perhaps his orders in that 1983 directive offer a clue. “The Director of Central Intelligence,” he wrote, “in cooperation with other Departments and Agencies as appropriate, will:”

The rest of the directive is blacked out.

Think of it as a bit of Amerimaskitovka. 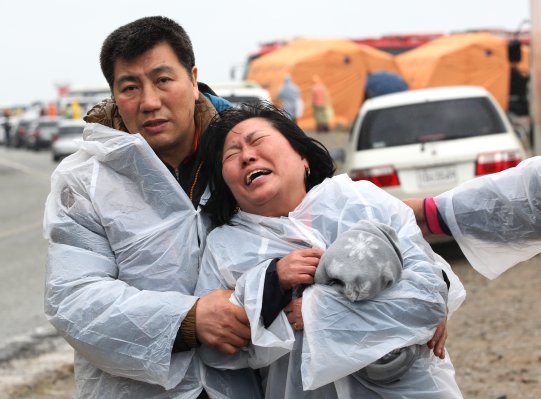