Influx of Refugees Fans Xenophobia Among Some Lebanese

Syrian refugee Yahya, speaks to journalists at the United Nations High Commissioner for Refugees (UNHCR) registration center in the northern city of Tripoli, Lebanon, April 3, 2014. The teenager from central Syria became the one millionth Syrian refugee to register in Lebanon.
Bilal Hussein—AP
By Hania Mourtada / Beirut

When Dima Wannous, a 32-year-old Syrian novelist and daughter of the renowned Syrian playwright Saadallah Wannous, hailed a taxi in Beirut on April 15 she did not expect her ride would end with the Lebanese driver assaulting her. Everything was going fine until a radio news bulletin mentioned that three journalists, working for Al-Manar, a TV station operated by the Shia militant group Hizballah, had been killed while covering the war in neighboring Syria. Wannous made a casual comment on the harrowing political conflict linking the two countries.

“The Sayed should not interfere in Syria,” said the driver, referring to Hasan Nasrallah, Hizballah’s secretary-general, by his honorific title. “He should let the Islamic State of Iraq and al-Sham [an al-Qaeda-affiliated rebel group] grind you and your children to little pieces. Get out of here and go back to Syria, you dogs.” The driver then turned around and punched her in the face, according to her account, which she later posted on Facebook and confirmed in an email.

Such incidents are becoming increasingly common in Lebanon with the rise of the Syrian refugee population, which many Lebanese blame for a recent rise in crime.

“The increase in numbers has increased xenophobia,” says Nadim Houry, deputy Middle East and North Africa director at Human Rights Watch. “We have definitely seen an increase in things like locally-imposed curfews.” He cautions that much of what is pinned on Syrians is based on unfounded rumors, and that local politicians had been blaming Syrians for the country’s problems long before the arrival of large numbers of refugees. “To date, I have yet to see any statistical evidence that the dramatic increase in numbers has had a large impact on crime. There are anecdotes and plenty of fear spreading, but little hard data,” says Houry.

Still, obscene graffiti exhorting Syrians to go home is a common sight. At least four mayors have imposed strict curfews on Syrian workers residing in small towns. Anecdotes abound of altercations between Syrians and Lebanese ranging from snide remarks to outright physical assault. The driver who lashed out at Wannous was pro-Hizballah, she claims. Passersby stood by watching in silence as Wannous was unceremoniously thrown out of the car marking a grim end to her brief visit to Beirut from Istanbul, where she lives.

Hizballah has sustained considerable losses in Syria while fighting alongside the Syrian government and against a largely Sunni insurgency. As a result, many in Hizballah’s mostly Shiite constituency in Lebanon harbor deep resentment toward Sunni Syrians, whom they have come to view as a dangerous threat to their very existence. A recent spate of car bombings targeting majority Shiite neighborhoods in Lebanon has further exacerbated existing schisms.

Some in Lebanon fear that Syrians will permanently implant themselves and compound economic woes. The constant trickle of refugees is putting a strain on a war-damaged infrastructure, stretching the country’s scarce resources and worsening its ailing economy. And as Lebanon struggles to cope, some prominent public figures have suggested that refugees be forcibly relocated back to “safe” areas in war-torn Syria.

“Why not install some camps for them in Syrian territory where there is security? The area of Syria is 20 times greater than that of Lebanon,” said Cardinal Beshara al-Rai, the head of Lebanon’s Maronite Christian Church, earlier this month at a press conference. “They take all the work from the Lebanese people.”

Some Lebanese politicians have expressed the same sentiment. Foreign Minister Gebran Bassil has argued against allowing Syrians to stay in Lebanon in the longterm, and has also proposed resettling them outside Lebanese territory.

But some Lebanese, more sympathetic to the plight of their neighbors, have accused corrupt politicians of fostering apprehension about Syrians in order to deflect attention from their own failures to remedy the country’s social, economic and political problems. Syrian refugees have become convenient scapegoats, they say.

The discrimination has become so pervasive of late that it has prompted sympathetic Lebanese citizens to rephrase offensive graffiti, create educational videos and launch a social media campaign to counteract the prevailing discourse that underpins negative perceptions of Syrians among some Lebanese.

In a video widely circulated by activists, young Lebanese people appear in succession, against a plain background, as they utter simple statements explaining why the country’s ills cannot be blamed on Syrians. “If my country can’t be self-sufficient, the fault lies with the authorities. It shouldn’t blame its failures on the refugees,” says one young woman in the video.

On a Facebook page called The Campaign in Support of Syrians Facing Racism, created earlier this month, a Lebanese man has posted a photograph of himself in which he’s holding a banner that reads: “I once met a Syrian who made us both proud.”

Houry thinks such campaigns send a strong message to both refugees and their host communities and should be amplified. “But, ultimately, Lebanon’s decision-makers need to develop a real policy towards refugees which would promote their rights while also objectively assessing the impact of the refugee crisis on host communities,” he said.

But not all of the anti-Syrian animosity can be solely attributed to economic and security concerns, sectarian tension or even politicians’ cunning statements. It is also deeply rooted in old grievances. Many Lebanese citizens have not forgotten the Syrian security apparatus’ violent interference in their political affairs, a meddling that lasted for nearly three decades following the end of Lebanon’s 15-year civil war. Damascus would often empower favored Lebanese politicians who in return facilitated Syria’s infringement on Lebanon’s sovereignty.

Violence periodically erupts in some overburdened areas. Last December, residents of Qsarnaba, a village in eastern Lebanon, set a tent encampment on fire after accusing Syrians of raping a mentally-disabled Lebanese man. The allegations turned out to be false. A doctor who examined the mentally-disabled man saw no evidence of rape, and a Lebanese local resident later told the press that the perpetrators had cooked up this pretext to chase out the refugees from their town.

With the Syrian conflict now in its fourth year, the situation could worsen as the influx of refugees continues. “There is not a single country in the world today that is shouldering as much in proportion to its size as Lebanon,” said Ninette Kelley, the regional representative for Lebanon for the Office of the United Nations High Commissioner for Refugees, during a recent visit to Washington. “If this country is not bolstered, then the very real prospect of it collapsing and the conflict of Syria spreading full force to Lebanon becomes much more likely.” 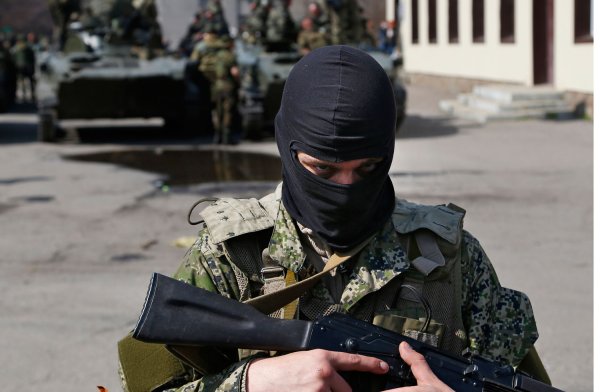 Ukraine's Jews Can Breathe Easily
Next Up: Editor's Pick