Ukraine's 'Jew Register' Either a Hoax or a Crude Extortion Scheme

A masked gunman guards combat vehicles with Russian, Donetsk Republic and Ukrainian paratroopers, flags and gunmen on top, parked in downtown of Slovyansk on April 16, 2014.
Sergei Grits—AP
By Simon Shuster

The news of pro-Russian thugs trying to impose a tax on Jews first appeared on Wednesday morning on a small, local news website in eastern Ukraine called Novosti Donbassa. Along with a photo of a neo-Nazi throwing the Hitler salute, the website offered the story of three masked goons hanging around a synagogue in the city of Donetsk and handing out anti-Semitic fliers to local Jews. The site even ran a photo of the flier, which demanded that Jewish residents of Donetsk show up to “register,” pay a fee of “50 American dollars,” and offer proof of any property they own in the region. It all looked like a crude joke.

But even though Novosti Donbassa is not the most reliable source even by the less than exacting standards of Ukrainian media, the story was apparently too scandalous to ignore. It ricocheted around the Internet on Wednesday before winding up in the Israeli press and, finally, on the website of USA Today. By Thursday evening, the article had reached U.S. Secretary of State John Kerry, who commented on it during high-level talks in Geneva. “In the year 2014, after all of the miles traveled and all of the journey of history, this is not just intolerable, it’s grotesque. It is beyond unacceptable,” Kerry told reporters after talks meant to resolve the separatist conflict in eastern Ukraine. By that point, this flier was making news around the world.

But even if it looked like the start of some racist purge, the flier was more likely part of an ill-conceived extortion plot or a propaganda ploy against the separatists. For one thing, the sign-off at the bottom of the flier — “Yours, the People’s Governor of Donetsk, Denis Pushilin” — seemed off. This was a reference to the so-called Donetsk People’s Republic, which was formed a week and a half ago by a group of armed separatists who seized the headquarters of the regional government. Theirs is perhaps the smallest breakaway republic in the world, as its territory is confined to that one building and a small patch of the plaza around it. Since April 7, they have barricaded themselves inside with a cache of weapons and demanded a referendum on secession from Ukraine. At the bottom of the flier was a reproduction of the stamp these separatists use on the press badges they have issued to journalists.

Denis Pushilin, however, is not the man who calls himself the “People’s Governor” of this pseudo-state. That would be Pavel Gubarev, who bestowed that title on himself in early March, during a separatist rally in the center of Donetsk. Three days later, he was arrested on charges of separatism and taken to jail in Kiev, where he remains. The alleged author of the anti-Semitic flier, Pushilin, is his ally and comrade-in-arms. But he has never gone by the title of “People’s Governor.” (His preferred title is the “co-chairman of the temporary coalition government” that he and his allies declared inside that building.) For his part, Pushilin denied on Thursday that he or his organization had anything to do with these fliers. “In reality this is a fake, and a pretty unsuccessful one,” Pushilin told the news network Russia Today. “It was all done with Photoshop.”

In the past few days, he added, similar fliers have been handed around to businessmen and foreign students in Donetsk. So all of this seems to be part of rather sloppy extortion scheme. If any separatists are behind it, they have probably done more to discredit themselves than to earn any extra cash.

The separatists’ ideology rests on two claims that were hard to defend even without their new anti-Semitic label. First, they have said that Ukraine’s revolution in February brought fascists to power in Kiev, and second, they have insisted that armed separatism is the only way to keep those fascists from taking over eastern Ukraine. At the entrance to their “People’s Republic,” on top of a pile of tires, is a poster with a big, crossed-out swastika and the words “No Fascism.” So for them to be seen as anti-Semites is a particularly painful irony.

That was part of the reason suspicion fell on their political opponents as soon as the fliers started making the rounds online. Dmitro Tkachenko, who helped organize a large rally in Donetsk on Thursday to support the unity of Ukraine, called the flier “a brilliant piece of disinformation” against the separatists. Asked if one of his fellow activists for Ukrainian unity could have staged it, Tkachenko says it’s possible. “But this is a sophisticated trick, and to be honest, I don’t think any of our folks are that smart,” he tells TIME.

More likely, Tkachenko says, the fliers were the work of an opportunistic splinter group, from separatists who just want to make money from their newfound impunity. Over the past week, they have managed to seize numerous government buildings in Donetsk, most recently the city hall on Wednesday, without any resistance from the police. “But their movement is very divided,” says Tkachenko. It includes various groups of armed thugs who answer to no single leader. So it’s quite possible that some of the more entrepreneurial goons among them just felt like making a bit of extortion money on the side.

Instead, they seem to have intensified the backlash against all their fellow separatists. The rally on Thursday gathered at least two thousand people, not bad considering that the local police had warned locals to stay away, citing concerns of a separatist attack on the demonstration. As for the Jewish community, its members have no intention of showing up to register their property with the vigilantes of the People’s Republic or anyone else. “It looked like a pretty stupid provocation,” says Larissa Loyko, a representative of civil society organization the Jewish Foundation of Ukraine. She suspects the separatists may indeed have been behind it, because Jewish leaders openly supported Ukraine’s revolution this winter. “But this is not the kind of matter that can be turned into a prank,” she says. “Someone will have to answer for this.” 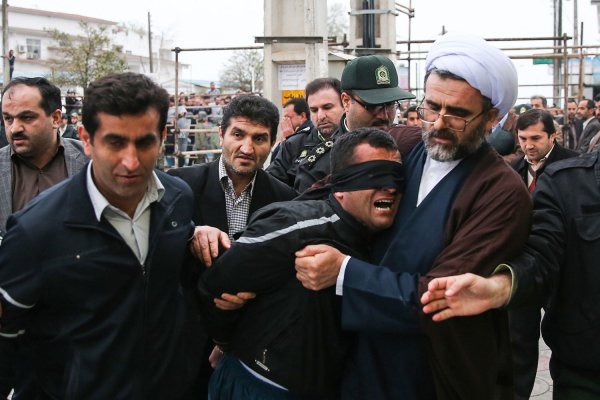 Killer's Life Spared Just Before Hanging
Next Up: Editor's Pick