Built in 1962, Seminary South was the first mall in Fort Worth and, by all accounts, the archetypal American shopping center. At its peak, it was home to a Sears, a JCPenney and a Dillard’s. There was a bowling alley, a movie theater and a space for the Fort Worth Opera to practice. Families took their children on weekends, and neighbors mingled. But like many other malls across the country, the shopping center began a steep decline in the 1990s. Over the next decade, big department stores left or closed. Gang activity became a problem, and shoppers stopped coming. “It’s where I used to buy my jeans as a kid,” recalls Joel Burns, the city councilman for the district. “It was a nice little shopping area.”

And now it is again. Seminary South has been reborn as La Gran Plaza, a sprawling, 1.2 million-sq.-ft. (111,000 sq m) hive of commerce and community. Most Sunday mornings, 25,000 to 30,000 shoppers pack into the mall to socialize, eat and shop. To pull off this feat, the mall’s new owner has tapped into the most powerful new demographic in the U.S. economy: Hispanic consumers. Refashioned as a cultural center, it has at its core the mercado, or market, a labyrinthine three-story bazaar packed with small storefronts selling everything from piñatas to PlayStations.

The success of La Gran Plaza and similar malls sprinkled across the southern U.S. underscores both the opportunity and the challenge of connecting with Hispanic consumers. One in six Americans is Hispanic, up from 1 in 16 in 1980, according to the most recent Census data. The group is projected to have an annual buying power of $1.6 trillion by 2018–more than any other minority group–according to the University of Georgia’s Selig Center for Economic Growth. Companies from fast-food chains to cell-phone carriers have poured billions of dollars into marketing to this demographic, mostly by airing Spanish-language commercials. But the man behind La Gran Plaza’s transformation says the right model requires more than merely adopting a Latin accent or turning a few exclamation points upside down. For him, it means going all in.

“Unas fresas con crema.” José de Jesús Legaspi reaches for a cup of fresh strawberries soaked in Mexican sweet cream. “Food is very nostalgic,” he says. “My mother would send me to the mercado to buy the honey or meat or the tortillas for the day. And then I would buy a little cup of fruit just for me.” Legaspi, 61, owns La Gran Plaza mall and eight others like it. As he walks, talking about square footage and foot traffic, he periodically bounces down to grab a discarded napkin or Jarritos soda bottle from the floor.

Legaspi grew up in a small town in Zacatecas state in central Mexico, the son of a schoolteacher and a storekeeper. He sold tostadas at lunchtime and delivered newspapers for pocket money. At 14, Legaspi and his seven siblings piled into a bus headed for the U.S. His father, an American citizen by birth who spoke no English, then led the family across the border on foot through a checkpoint into California through San Ysidro, south of San Diego. Legaspi, who graduated from Loyola Marymount University in 1974, went into the real estate business in the late 1970s, helping Mexican food chain El Pollo Loco secure storefronts. (Legaspi is a U.S. citizen through his father.)

In 2004, Legaspi began looking at dilapidated malls as possible investments. He toured Fort Worth block by block, counting strollers, visiting Spanish Masses as well as schools and popular Mexican restaurants. By November he had purchased the near dead mall and begun pitching his concept to local officials, including the district’s city council representative (Wendy Davis, who has since gone on to greater prominence as a Texas state senator and gubernatorial candidate). A $22 million city grant ultimately helped fund the revitalization. “We have more than got our money back from this deal,” says Robert Sturns, who coordinates business development for the city. The mall employs more than 1,000 people and is, according to Sturns, a key part of the region’s tax base.

Since then, Legaspi’s privately held company has revitalized malls in Los Angeles, Phoenix, Atlanta, Oklahoma City and Houston with mariachi bands, Catholic holiday services and regional food. Legaspi says the malls have to offer something for multiple generations at the same time. That can mean spots for elderly patrons to sit for hours while their children and grandchildren shop. That also means finding space to accommodate a wider range of family needs, including grocery stores, medical offices and DMVs.

Most of Legaspi’s malls also feature a mercado selling puffy quinceañera dresses, tall racks of cowboy boots, cowboy hats and imported candy. Patrons can haggle with shopkeepers over car rims or horse saddles. The malls also function as incubators for small businesses mostly run by immigrant families. “The American Dream is not to own a home,” Legaspi says. “The American dream is to own your own business. To have a hold of your own destiny. That’s how we build the mercado.”

In Mexican neighborhoods Legaspi sells Mexican, and in Caribbean neighborhoods he sells Caribbean. But the lingua franca in all his malls is Spanish. The formula appears to be working: he says most of his nine locations see 4 million to 6½ million visitors annually–that’s per mall–up from practically nothing at many of them. Mainstream stores in the malls, such as Burlington Coat Factory and Foot Locker, meanwhile, have seen a 12% to 20% increase in foot traffic. Legaspi says his company is profitable and plans to continue expanding.

Struggling retailers are encouraged too. JCPenney, which has had several stores in Legaspi developments, now views Hispanic women as its core customers. That means selling apparel that fits differently, remodeling outlets in Hispanic areas first and retooling its marketing. The company says its 150 Hispanic-designated stores are among JCPenney’s best-performing outlets. “We know that our core customer is a hardworking mother,” says Lyris Leos, director of multicultural marketing at JCPenney. “And we know that she is most likely Latina.”

Sandra Borrell, 36, sits in front of Melrose Shoes at La Gran Plaza waiting to start her shift. It’s early on a Sunday, and the ubiquitous mariachi music hasn’t yet begun, nor have the crowds arrived from Mass. It’s still quiet, and Borrell wouldn’t mind if it stayed that way. “I’m not really into the Mexican music and stuff. I’m a country gal,” says the second-generation Mexican American. “We were raised the American way.”

Most of the growth in the Hispanic population in the U.S. is now being driven by children born here rather than by migrants. Two-thirds of Hispanics ages 16 to 25 are native born. That has profound implications for how they self-identify: 66% of Hispanics born in the U.S. to immigrant parents view themselves as “typical American,” according to a recent Pew Research survey. “The early part of this group of young generations born in the United States is really starting to enter adulthood. They’ve been educated in the U.S. and speak English,” says Mark Hugo Lopez, the director of Hispanic research at the Pew Research Center.

That means what is working for Legaspi now may not in the future. “Ethnic businesses make a lot of sense right now, but in another generation the Latin American enclaves that we see in places like Fort Worth and Oklahoma City are going to look like what a Little Italy might look like now,” says Jacob Vigdor, a professor of public policy at Duke University. “They’re going to go off and join everybody else.”

And while the malls may be packed on the weekends, that doesn’t mean people are rushing to buy more expensive merchandise. The mall sells an average of less than $200 of merchandise for every square foot of space–far less than the average in the Dallas–Fort Worth region, about $435 per sq. ft., according to Green Street Advisors. Legaspi’s Desert Sky Mall in Phoenix has managed close to $270 per sq. ft., but the average for the Phoenix metropolitan area is $485 per sq. ft.

As much as Legaspi is benefiting from demographic changes, he may also be subject to them. “I think the kids who were born here want what all kids in the same socioeconomic status want,” says Albert Saiz, an MIT professor who studies real estate and immigration. “As a consumption market, they’re pretty much like any American. To be honest, this is a moving target that’s already almost gone.”

If that idea worries Legaspi, he doesn’t show it. Back in La Gran Plaza’s executive offices, above the mariachi stage, a sprawling calendar displays events planned for every week through 2015. It includes the Día de los Muertos, or the Day of the Dead, scheduled for November this year and next, as well as Las Posadas, La Gran Plaza’s re-enactment of Joseph and Mary looking for lodging before Jesus’ birth. “We literally go from store to store asking for lodging,” Legaspi explains. “The tradition here is that eight stores tell us no and the ninth store tells us yes.”

Legaspi is planning World Cup screenings this summer along with the mall’s marketing director, Miguel Calera. “How do we sustain and maintain our customer base, and then how do we start testing who else can we bring in?” asks Legaspi. He points at the tentative schedule of World Cup broadcasts in the mall. Ever keen to diversify, he adds, “We’ve got to have the U.S. [matches] in here, always.”

Below, the shopping center is packed with families. In Rosita’s Western Wear, Jorge Barraza stands behind the counter rubbing a dry sponge along the brim of a cowboy hat. He dusts off the felt and then wraps his hand in packing tape, patting down the hat until it’s spotless. The 19-year-old is sporting a black cowboy hat with a wide brim, a gray suit jacket and a preserved scorpion ensconced in a belt buckle he bought in Durango, Mexico. “I consider myself a cowboy, whether Mexican or from here,” he says. Barraza grew up in Durango but has lived in Texas for three years. “I don’t want to look cowboy-cowboy. I want to look my-own-way-cowboy.”

A lot of shoppers in the mall, especially the old-timers, look cowboy-cowboy. Most younger people don’t look cowboy at all. Not far away, Gerardo Rodriguez, 15, is watching people sing karaoke in Spanish. “When I was in Mexico, I would walk around down there, and you’d always see people dressed nicely wearing hats, and everyone knows the song,” he says. “Coming here, this reminds me of where I’m from. It’s my own heritage.” 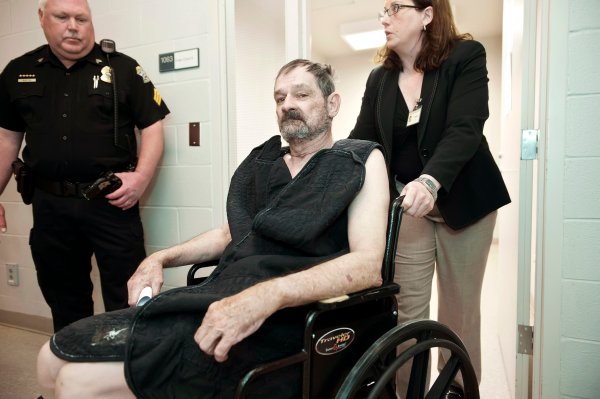 The Blindness of Bigotry
Next Up: Editor's Pick