As I walked down the street one recent morning, a man exiting a convenience store directed a low noise somewhere between a hiss and a whistle in my direction. Perhaps he was clearing something from his teeth, perhaps not: I did not bother raising my eyes to find out. Instinct quickly kicks in. Keep your head down, swerve across the sidewalk, push it to the back of your mind.

Such incidents are so common for women the world over that it took me a while to even make the connection with the topic on my mind at the time: a bill, expected to be approved by the Belgian Senate this month, that would make Belgium the first country in the world to define and criminalize sexist insults in public spaces.

Studies by groups raising awareness of street harassment show that about 90% of female respondents in most countries have faced insulting, sexually laden behavior in public. It reaches across cultures and income divides, from the businesswoman on the Tokyo subway to the schoolgirl in a Mumbai slum.

In 2012, a Belgian student named Sofie Peeters decided to do something about the comments she faced. She filmed her daily gauntlet through the streets of Brussels, and the resulting documentary, Femme de la Rue, shocked the country when it was shown on Belgian television and at screenings nationwide. Equal Opportunities Minister Joëlle Milquet promised action, and two years later her antisexism bill is on the verge of becoming law.

But will it really help elevate the standing of women in society to suggest that we need legal protection from a noise or lecherous comment in the street? The first problem is defining the offense. I was annoyed by the whistle that morning, but I certainly didn’t feel like the victim of a crime. On occasions I have felt threatened by street comments, other times amused by what are clearly intended as compliments, and I sometimes struggle to define at what point banter becomes something more sinister.

The new bill in Belgium defines sexism as a gesture or act against a man or woman that is “intended to express contempt for a person because of their gender, or that regards them as inferior, or reduces them to their sexual dimension, and which has the effect of violating someone’s dignity.”

This vague language has legal scholars fearing for freedom of speech in the country. Jogchum Vrielink, an expert in discrimination law at Belgium’s University of Leuven, wonders if romance novels in which men are reduced to sexual fodder for voracious women will fall foul of the law. Should hip-hop artists rapping about “hos” and “bitches” really face fines of up to $8,300 and a possible year in prison?

The Belgian bill is also just one among many recent initiatives in Western countries casting women as vulnerable victims in need of the state’s help to decide when they are being exploited or insulted. Other examples include a campaign in Britain to ban photos of topless women from the pages of tabloids and efforts on both sides of the Atlantic to outlaw elements of prostitution. These initiatives are frequently championed by politicians of both sexes with little input from the groups they claim to be protecting, reinforcing the idea that women cannot make informed choices for themselves.

What women do need from their governments are more proactive policies in the fields of child care and shared maternity and paternity leave to help women compete on a more level playing field in the workplace. Laws dealing with discrimination, workplace harassment and sexual assault need to be aggressively enforced, while developing countries lagging behind need to make sure their legislation is comprehensive and police are actively enforcing laws that protect women.

Sexist insults should be tackled like other social ills such as bullying and non-gender-specific taunts—with campaigns in schools and local communities to raise awareness that such behavior is unacceptable.

Women are more than capable of raising their own voices and fighting back, and do so through global initiatives like the Everyday Sexism Project and Hollaback!, websites where people share their retorts to sexist street abuse. Often the best response is simply to ignore the vulgar comments and resist giving taunters the reactions they crave. Policymakers would be wise to do the same. 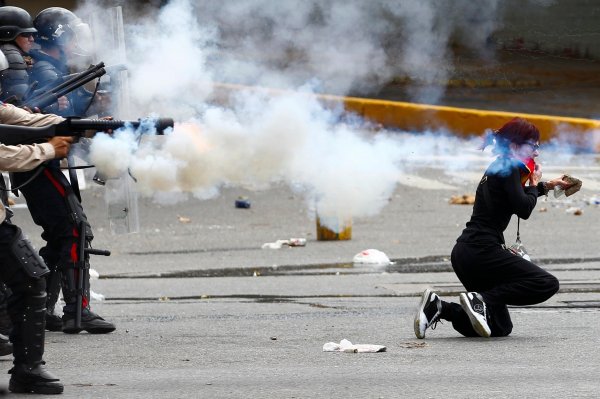 Crisis in Caracas
Next Up: Editor's Pick