Thailand Was Never the Land of Smiles, Whatever the Guidebooks May Have Told You

Welcome to the Land of Smiles. Thailand has never been the happy carefree place that many non-Thais have been led to believe
Ornchai Kittiwongsakul / AFP / Getty Images
By David Stout

Anti-government protests in Thailand have claimed at least 10 lives and seen more than 600 people injured during shootings, bombings and vicious street fighting over the past three months. Snap elections have been disrupted and Prime Minister Yingluck Shinawatra may well be forced from office by either military or judicial intervention.

In the increasingly likely event that Yingluck is ousted, her ardent backers from the north and northeast are expected to descend on Bangkok, with a high possibility of further bloodshed.

“There is no question that there is a serious political divide in Thailand,” anti-government protest leader Suthep Thaugsuban recently told TIME. “We need to start curing the disease rather than continue to treat the symptoms.”

The current crisis has tarnished the notion of Thailand as the “Land of Smiles” portrayed in tourist guides. But while the Lonely Planet may eulogize this “friendly and fun-loving, exotic and tropical, cultured and historic” land with its “ever-comforting Thai smile,” it is a pure fabrication to pretend the country was ever a bastion of happiness and unity.

Thailand was formed from a smattering of Buddhist kingdoms and the southern Islamic Sultanate of Pattani, which were brought to heel by successive monarchs from the current Chakri dynasty. The Rama kings, beginning in the 18th century, forcefully sought to bring their diverse subjects under the rule of one crown, language and religion. Despite the generations that have passed since the advent of Siam and centralization of power in Bangkok, regional and cultural animosities remain deep-seated in contemporary Thailand.

The ongoing war of attrition in the deep south, where Islamic insurgents engage in a bloody tit-for-tat with Buddhist security forces, serves as the starkest illustration of simmering historical grievances, but is far from unique. “Every few decades, there’s some sort of movement of resistance against Bangkok,” say Duncan McCargo, a British scholar of Thailand and the author of Tearing Apart the Land on the southern conflict.

Isaan in the country’s Northeast, where Yingluck pulls a large portion of her political support, has also long been a hotbed of animosity toward the capital. Millenarian movements at the turn of the century (ruthlessly crushed after rebelling against Bangkok’s religious edicts) were followed by nationalist insurrections in 1940s and 50s after the fall of the absolute monarchy.

Then, from the 1960s up until the early 1980s, the Communist Party of Thailand waged a guerrilla campaign against the throne from rebel bases there. The jungle outposts would also provide shelter to student protesters who managed to flee Bangkok after a vicious military crackdown at Thammasat University in 1976.

Discontent spread to other regions as well, peasant revolts rocked the central plains and the north in the 1970s amid crippling debt and overbearing rule from, once again, Bangkok. “By adhering to this very rigid centralized power structure, Thailand has made it difficult to manage the populations across the country,” says McCargo. “As politics becomes polarized when you have a highly centralized system, there’s not much give and take.”

And so the current discord between Yingluck’s backers in the country’s northern rice bowl and the entrenched urban elites are simply a continuation of long-smoldering tensions. But why is this coming to the fore again now?

Amid all of the turmoil and myriad coups of the 20th century, the widely revered King Bhumibol Adulyadej spent the better part of his 68 years on the throne working to resurrect the role of the palace in cementing the unity of the country. In 1992, the King went so far as to bring the leaders of warring factions vying for dominance to their knees in prostration, and lectured them at the royal palace about the dangers of disunity.

Twenty-two years later, the Chakri dynasty now finds itself in a very different position. The 86-year-old monarch is ailing and unable to intervene and restore calm, while his likely heir, Crown Prince Maha Vajiralongkorn, is unpopular and does not enjoy the moral authority to perform this role.

“The king is frail, the palace does not seem to be united, and some members of the royalty seem to be openly siding with the anti-government protesters,” says David Streckfuss, an independent scholar based in northeast Thailand.

Royal succession has historically been a sensitive time in Thailand, and the looming transition between Rama XI and X will be no different. And if compromise fails and violence escalates in coming weeks, one of the least troubling corollaries is that tourist guides will have to find something else to laud instead of the “ever-comforting Thai smile.”

History shows that in reality there was no such thing. 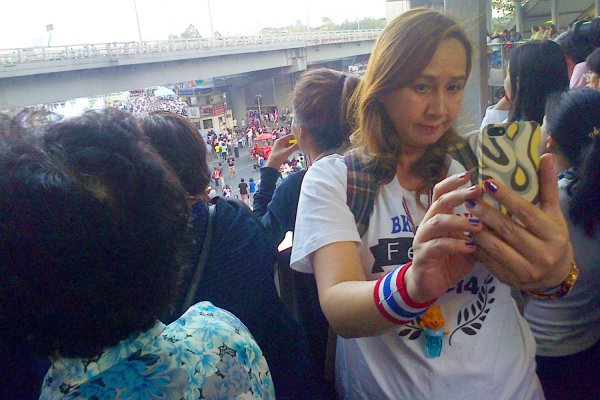 'Nobody Liked My Selfie and Now the Country Is Going to Hell'
Next Up: Editor's Pick