As she recalled in her 2012 memoir, Cyndi Lauper went through a difficult period in her life during the early ’80s as an unknown singer in New York City. Her band Blue Angel was breaking up without achieving any commercial success, and she found herself involved a lawsuit with the group’s former manager. Then, Lauper lost her voice due to an inverted cyst in her vocal cord. And to top it off, she had to take on jobs to support herself that included working as a salesgirl and a maid.

But that all changed starting in the spring of 1983, when Lauper began to record what would be her debut solo album She’s So Unusual. Released in October of that year, the record spawned four Top Ten singles — “Girls Just Want to Have Fun,” “Time After Time,” “She Bop” and “All Through the Night” — and launched her as one of the major pop stars of the decade. By 1984, that record, which has since sold 6 million copies in the U.S., stood its own alongside other blockbuster albums such as Michael Jackson’s Thriller, Prince’s Purple Rain and Bruce Springsteen’s Born in the USA. And through the power of MTV, Lauper drew attention for her distinctive look and colorful fashions, serving as precursor to the styles of contemporary pop stars like Lady Gaga, Katy Perry and Nicki Minaj.

To mark the record’s 30th anniversary, Sony/Legacy has reissued a special version of She’s So Unusual containing not only the original record but also demos and bonus tracks from the period — including an early raw guitar rendition of “Girls Just Want to Have Fun” — along with new dance remixes of certain songs. Its release comes during a fruitful period for Lauper, who last year won a Best Original Score Tony for the hit Broadway musical Kinky Boots. And starting Wednesday, April 23, she will be touring with Cher through July. On the eve of the tour kickoff, TIME spoke with the singer about She’s So Unusual turning 30 and the album’s enduring impact.

It’s hard to imagine that She’s So Unusual is 30 years old now. Does it amaze you how much time has passed?

In one sense, it really does seem like yesterday. My memories of that time are so vivid. In other ways it feels very much like it was at least 30 years ago when you think about how much I have been through — not only as an artist, but as a human being. Lots of life in them 30 years. It’s very exciting that the album has had that staying power.

How does it feel to look back at all of this again?

Before Sony approached my manager about doing this 30th anniversary edition/celebration, I hadn’t really thought about the album critically, or really even listened to it in years. Of course, I continue to perform many of those songs live, but over time they change some from the original. So, to go back and really listen to the album again, to take out the demos and listen to what we were doing then and how the album evolved from rehearsals to recording was really great. With this release, fans can hear a bit of that journey.

At the time you were making the record, did you have any inkling that She’s So Unusual was going to be hugely successful? Were there big expectations riding on this record for you?

None of us knew. We hoped it would be a hit, but had no idea that it would take off the way it had. I had already had a record deal with Blue Angel so I knew that having a record deal didn’t necessarily mean you would make it. I did have quite a few offers from labels for this, my first solo record, so there was some expectation, but not in a bad way. I was allowed to be the artist I wanted to be, to sound like, to look like, etc. It wasn’t 100% what I wanted — I was only allowed to contribute a few songs that I had written, but the sound and the cover and the videos we made for the album, I was left alone to create those, and that was really cool. I wouldn’t have that kind of space again because once that album hit, there was a lot more micromanaging from the label.

Musically, She’s So Unusual is very diverse — there’s pop, New Wave, dance, reggae, funk, and even a little bit of punk. Did you know from the outset what you wanted this album to be?

Totally. Nothing on that record is an accident. I have a very clear vision of what I wanted to say on that record, what I had hoped people would feel when they listened to it. I wanted to be very clear that I was an artist that had been influenced by many genres of music, so I made sure you could hear a little bit of it all. I wanted all those influences included and to sound like me while also being commercial at the same time.

Obviously, “Girls Just Want to Have Fun” is your best-known and most beloved song. I always wondered how that song, which was written by Robert Hazard, fell into your lap? In the last 30 years, it has matured from a hit pop song to an iconic universal anthem.

[Executive producer] Lennie Petze brought me the song. He loved it. Well, the first time I listened to it, I didn’t love it. But then I went, “Wait a minute…” This song, sang from a woman’s perspective, could be really cool. Robert wrote it for a guy to sing about a girl… y’know, “girls want to have fun,” and I was like, “Ya know what, as a matter of fact, we do.” And I could see how I could turn it into a song about empowerment. I changed the arrangement so it would fit my voice and what I was doing on the record. Robert was cool with the changes and there you have it. What has been great to see is every year since that record has come out, when I perform it live, the women (and the men, too) in the audience celebrate. At first it was just women with their friends, then I started to see women with their young daughters, and now I see those little girls who are now in their 30’s with daughters of their own – three generations of “girls” and that is inspiring to me. That the words and that call to women to recognize their power still connects is something I am very proud of.

You came up around the same time MTV was still relatively new back then, and the videos you did for the album were just as memorable as the songs themselves. How would you characterize the marriage between you and the channel?

For me, music has always had a visual connection. When I listened to records as a kid I always tried to imagine what the singers looked like, where they were, what they were doing. Later on when I started to do gigs, I always imagine myself as the character in the song, her perspective, what she is thinking [and] doing when I sing the song. It was very important that the visual and the music tied together because that is just how my brain works. So when MTV launched and the video age really took off, it was thrilling for me. I needed MTV, and MTV needed an artist like me.

There is no doubt you have been so influential both in music and fashion since She’s So Unusual on today’s artists. How do you feel when you see them take a page from what you did 30 years ago?

Very much. Of course. Gaga and Katy and Nicki have all said things about my influence on them, among other artists of course —not just me — and that’s cool. As a little girl Nicki Minaj said she saw me on MTV and she knew what she wanted to be when she grew up (I think she said she was, like, 4 years old), and if by listening to my records and watching my videos she was even, in some small way, influenced, that’s gratifying. Because that’s what the music community should do. I was influenced by a whole list of female artists that came before me. From Big Mama Thornton to Janis Joplin to Joni Mitchell and more. That’s what I think these artists are referring to. I am a part of the tapestry that makes up their influences and I am happy to be that for them. They are all individual artists that have a unique perspective that will be the influencers of the next generation of artists.

You’re gonna be on tour with Cher this month. Had you performed with her before and were you a fan of hers growing up in the ’60s and ’70s?

Yes, this is my third tour with Cher, but it has been a long time — almost 10 years since last we toured together. I was a fan of hers growing up. I bought her records and of course watched the Sonny & Cher show religiously. I mean, the costumes and the hair and the makeup! Come on! I’m looking forward to being out on the road with her again. Cher has always been very supportive of me. There were times in my career when I needed her and she has been there for me, so I wanted to be able to go out again with her to say thanks.

It’s been a very active period for you in the last two years — with the memoir and the success of Kinky Boots. Plus, you’re nominated for this year’s Songwriters Hall of Fame.

It has been an amazing few years — yes, it has. While the successes have been recent, I’ve worked very hard throughout. My memoir and Kinky Boots were both about five years in the making. And honestly, I never give up. I am still inspired and I still want to be creative, and it’s really nice that I am being recognized for my work because it hasn’t always been that way.

Do you see yourself working on another musical after Kinky Boots?

Absolutely. Have already begun to have a few discussions about that. I love being part of the Broadway community and hope to be involved with many more Broadway musicals. Kinky Boots has its first national tour going out later this year, and that’s great. It’s also opening in England and South Korea, the first of many international productions. 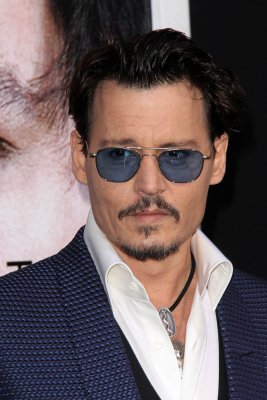 Johnny Depp: Transcendence Could Really Happen
Next Up: Editor's Pick