Japan’s Prime Minister Shinzo Abe has a rare electoral mandate in a nation that has churned through six Premiers in just as many years. Called a brazen nationalist by some and a brave change agent by others, the 59-year-old Prime Minister — whose first term ended abruptly after a year in 2007 and who assumed office again in December 2012 — sat down at his Tokyo office on April 9 with TIME managing editor Nancy Gibbs and East Asia correspondent Hannah Beech to discuss patriotism, “Abenomics” and his controversial grandfather.

On Japan’s relations with the U.S.:

“To preserve the national interests of Japan, first of all, I’d like to strengthen the Japan-U.S. alliance. Japan became an ally of the U.S., whom it fought against in the past war. I think this alliance has largely contributed to the peace and stability of the Asia-Pacific region.”

On Japan’s relations with China:

“Because there is a problem that exists, the doors for communication between the two nations should not be closed. Japan always keeps our door for communication open. I’d like China to take the same attitude.”

On the territorial dispute with China over islands in the East China Sea:

“Japan considers the Senkaku Islands [known as the Diaoyu by China] as Japan’s inherent territory. Unfortunately, Chinese government vessels are repeatedly violating Japan’s territorial waters near the Senkaku. China has been acting the same [way] also in the South China Sea, and many ASEAN [Association of Southeast Asian Nation] nations have strong concerns about [these maritime disputes].”

On Japan’s brutal wartime record and official Japanese apologies for it:

“In the previous war, Japan has given tremendous damage and suffering to the people of many countries, particularly those of Asia. Japan’s postwar era began based on this remorse. Previous Prime Ministers have expressed their feelings of remorse and apology. In my first administration, I also did so.”

On his visit to the controversial Yasukuni Shrine, where the enshrined war dead include convicted war criminals:

“I paid a visit to Yasukuni Shrine to pray for the souls of those who had fought for the country and made ultimate sacrifices. I have made a pledge never to wage war again, that we must build a world that is free from the sufferings of the devastation of war.”

On the 1993 Kono Statement that recognized the Japanese military’s sexual enslavement of Asian “comfort women,” which Abe indicated during the 2012 campaign he would like to revise:

“At the time of the first Abe administration, a Cabinet decision was made stating that there was no information that shows people were forcibly recruited. Lots of Japanese citizens did not hear that, and it may have not been recognized internationally. I had been saying in the election campaign that this Cabinet decision and the Kono Statement should be considered together. Because I have said this, lots of people are aware of this issue now. As for the Japanese government, we are not considering revising the Kono Statement.”

On patriotism and criticism:

“I am a patriot. I would think there are no politicians who are not patriots. Since I am a politician, I often get criticized, as I try to exercise what I believe to be right. However, if you mind such criticism, I think you can’t protect people’s lives.”

“I have learned that being a politician is not an easy job. My father was trying to make progress in the peace treaty with the Soviet Union. At that time he was suffering from last-stage cancer, but he visited Moscow in the bitter cold. I learned from my father that you may have to risk your own life to make such a historic accomplishment.”

On his maternal grandfather Nobusuke Kishi, a member of Japan’s wartime Cabinet who was locked up (but never charged) by the Allied powers and later became Prime Minister:

“If I try to make it correct, my grandfather was arrested but not prosecuted. [As Prime Minister], my grandfather amended the Japan-U.S. Security Treaty. He faced severe criticism. He passed the treaty and resigned as Prime Minister at the same time. Those who were against [revamping the treaty] are now overwhelmingly for [it]. Unfortunately, politicians don’t get applause.”

On his paternal grandfather Kan Abe, a wartime legislator:

“He was one of the few Diet members who was against [wartime leader Hideki] Tojo’s Cabinet and Japan going to war with [the] U.S. I have learned from each family member that politicians sometimes have to make decisions all alone.”

On the need to revise the postwar pacifist constitution, which was written by the Americans and precludes Japan from possessing a normal military:

“It has been believed for a long time in Japan that things such as the constitution can never be changed. I say we should change our constitution now. The U.S. has amended its constitution six times, but Japan has done it zero times.”

On the state of the nation when he assumed power in December 2012:

“When I came to office, in terms of diplomacy and national security, as well as the economy, Japan was in a very severe situation.”

“The economic policy that I am implementing now is a growth strategy, which includes radical financial relaxation, flexible monetary policy and encouragement of private investment. For a long time, we have been suffering from deflation. We haven’t overcome deflation yet, but the confidence of small and medium businesses has turned to positive after 21 years and 10 months.”

On the role of women in Japan:

“I often say to entrepreneurs: ‘If Lehman Brothers were Lehman Brothers & Sisters, it wouldn’t have gone into bankruptcy.’ Hillary Clinton says if Japan were to utilize women’s power more, Japan’s GDP would increase by 16%. We have decided that at least 30% of all new hires by our government should be female. We have requested at least one female board member in first-tier listed companies. She doesn’t have to be Japanese but could be a foreigner.” 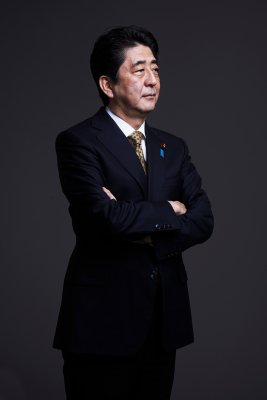 Shinzo Abe: The Patriot
Next Up: Editor's Pick