Eyefi Cloud Is the Best Wi-Fi Camera Experience Yet

You might think that the market for Eyefi cards–the SD cards that have built-in WiFi, providing any camera with wireless networking–would have dwindled away by now. After all, the first cameras that came with Wi-Fi debuted almost a decade ago. But Wi-Fi still only ships as standard equipment on slightly over a third of new models, giving Eyefi a big market to go after.

I’ve used its cards with my cameras for years, especially since I started spending most of my time on my iPad, which otherwise only accepts SD cards through an external dongle I never remember to take with me. They’re indispensable. But in the past, I’ve never been overly impressed with the company’s software: It’s tended to be tough to set up and pretty clunky in everyday use.

Now that’s changing. The company is unveiling Eyefi Cloud, a new service designed to make it a cakewalk to to get your photos off the camera and onto every gadget you own: phones, tablets and PCs. And it’s coupling the service with all-new versions of its iOS and Android apps that are major improvements on their predecessors.

The service and apps work with Eyefi’s Mobi cards, which start at $49 for a model with 8GB of storage. The company’s more PC-centric X2 line remains on the market, and isn’t compatible with the new stuff.

As before, the apps snag photos wirelessly by connecting to the card while it’s still in your camera. But now they’re much meatier and modern-looking. Using an interface that reminds me of Dropbox’s new Carousel app, they cluster your pictures by date, present them more attractively and let you create tags and albums.

And now the apps automatically upload all your photos in full resolution, as well as snapshots you take with the camera on your phone or tablet, to Eyefi Cloud. (You can choose to have them do this over Wi-Fi and cellular connections, or only Wi-Fi.) Once they’re there, they’re available on all of your devices running the app, as well as in a browser-based version of the service you can use on your Windows PC or Mac. You can also share images and albums with other folks, who don’t need to have Eyefi Cloud accounts to view them.

The apps keep only recent photos on the devices themselves so they don’t gobble up all your storage. But you can quickly swipe backwards in time to get to any photo you ever took, and save it on any of your devices. (Any photo you took with your Eyefi card or device’s camera once you started using Eyefi Card, that is: The apps don’t provide a mechanism for getting your older pics into the service. But the company says it’s working on that.)

The Eyefi Cloud service lets you store an unlimited number of photos indefinitely at full resolution, so it shouldn’t come as stunning news that it’s not a freebie. After a 90-day trial period, you pay $49 a year. If you don’t want to spring for that, you can still use the new iOS and Android apps and take responsibility for moving your pictures between devices yourself.

Eyefi Cloud isn’t doing anything radically new: It’s already possible to automate the process of putting your Eyefi photos online by using the automatic uploading features provided by apps such as Dropbox, or the Google+ uploads built into Android. But it does what it does really well.

I do have one remaining beef, though. Each time you want to pair an Eyefi card with a phone or tablet, you need an activation code that’s in the original packaging. It’s possible to find the code online or in the app on an already-activated device if you’ve misplaced the printed version–which I did, inevitably, moments after buying my card. But the apps don’t explain that. And why do you need to re-enter the code manually, anyhow?

Nitpicks aside, this is the best user experience that Eyefi has ever offered. I recommended its cards in the past; now I do so more heartily than ever. 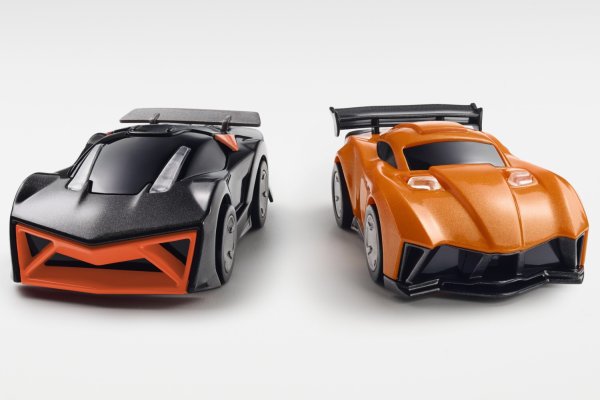 Anki's Slot Cars for the iPhone Era Get a New Game, New Tracks and New Cars
Next Up: Editor's Pick