People tend to notice when you pull out a phone with a curved display. They might even get curious enough to ask about it. At least that’s been my experience after spending a couple weeks using the LG G Flex as my primary phone.

Unfortunately, those real-life conversations never ended well. The LG G Flex is a deeply-flawed phone whose curved design causes bigger problems than the ones it solves. It’s the rare device that I can’t wait to stop using after reviewing it, and I wouldn’t recommend it to anyone.

LG says the six-inch, 720p curved screen creates optimized viewing angles and less glare than flat screens, and I’ll admit to initially being taken in by the IMAX-like viewing experience.

Residual images on the home screen after exiting the app tray.

But that minor benefit is negated by a couple major flaws. First, the G Flex has a nasty habit of creating residual images on the screen any time you look at something for more than a couple seconds. It’s almost like the burn-in you’d get on an old plasma TV, except that each residual image disappears after a couple seconds, so it’s a constant distraction. The other problem is that if you look closely, you can see a smattering of multicolored dots throughout the screen. It’s especially bad on light backgrounds, but overall it gives the display a hazy, grainy look. I checked two devices — one on AT&T, another on T-Mobile — and both had the same screen issues.

The other big benefit LG touts about the curved screen is that it contours more naturally around your face during phone calls. While I’m not convinced that people were struggling to communicate with their flat-screened phones, holding the G Flex against your cheek does feel kind of nice. Compared to a regular-sized phone, however, the G Flex’s large size prevents the microphone from getting much closer to your mouth, as the company claims it does.

LG also says that the curved design makes the rear speaker sound better when the phone is laying on a flat surface. Compared to an iPhone 5, whose speakers are on the bottom edge, I’d say it was a toss-up in terms of quality. Neither device comes anywhere close to the HTC One and its rich, front-facing speakers.

While not directly related to the curved display, the G Flex also has a supposedly scratch-proof back panel. Although the G Flex will succumb to deep cuts with something sharp, the phone did a fine job of fending off moderately heavy key scratches. (It’s worth noting that the back of an iPhone is reasonably scratch-resistant as well.)

Curved screen aside, the LG G Flex is just a subpar high-end smartphone.

The rear buttons for volume and power are a constant source of frustration. I haven’t used LG’s G2 smartphone, so I can’t say if the placement works better on a smaller screen, but reaching behind the phone just didn’t feel natural on the larger G Flex. And if you have the phone resting on a table — say, using it while eating lunch — you can’t get to those buttons at all. Alternatively, you can power the phone on by tapping twice on the display, but this worked maybe 80 percent of the time, in my experience. It’s maddening one way or another.

The 13-megapixel camera is adequate, but a lack of optical image stabilization means you’ll need a steady hand to avoid blurry photos. I also occasionally had trouble with tap-to-focus when taking pictures of people, so it’s better to just let the camera’s auto-focus kick in on its own. The camera has some other helpful features, such as panorama mode and dual camera mode. Still, it’d be even more helpful if some of these features were built into the default camera setting, especially burst shot and “Shot & Clear,” which removes unwanted people from the background.

The G Flex doesn’t run the latest or even the second-latest version of Android, but rather the year-old Android 4.2.2. LG takes a similar approach to Samsung in customizing the software, with garrish home and lock screen transitions, bubbly sound effects and a mix of useful and gimmicky extra features. In theory, I like being able to run two apps side-by-side with “Dual Window,” but app support isn’t as nearly extensive as Samsung’s similar “Multi Window” — there isn’t even support for Twitter or Facebook. The ability to open small pop-up apps, such as a calculator or calendar, from the notification center is useful, though it does eat up space for notifications if you decide to enable it. I’m not as sold on “QuickMemo,” which lets you take a screenshot and draw on top of it. Without stylus support, it seems like an unnecessary add-on.

If there’s one saving grace for the LG G Flex, it’s the huge 3,500 mAh battery — or 3,400 mAh on T-Mobile — which actually flexes along with the phone body. Getting through the day simply isn’t a concern on this phone, and you may even be able stretch the battery to a couple days of moderate use on a single charge. Although long battery life is nothing new for extra-large smartphones, the G Flex does have a larger battery than rival Samsung’s Galaxy Note 3.

Still, a good battery isn’t enough to outweigh the LG G Flex’s other weaknesses, and the curvy screen is worth nothing when the screen itself has such glaring drawbacks. Maybe someday, curved screens can become a “nice to have” feature — something you can proudly show off in conversation — but unless the rest of the phone is excellent, people will just think you’re a sucker. 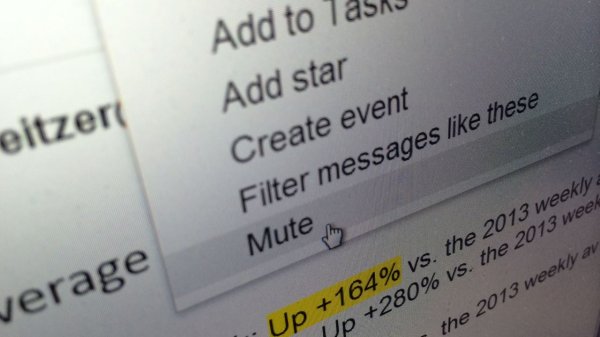 30-Second Tech Trick: How to Mute Group Email Messages
Next Up: Editor's Pick