Highway Funding Is About to Run Out

From left: Michael Cahill, President of Siemens Rail Systems in the U.S. listens to U.S. Transportation Secretary Anthony Foxx at the Siemens Motors Manufacturing Plant in Norwood, Ohio, April 14, 2014.
Tom Uhlman—AP for Siemens
By Per Liljas

The U.S. Highway Trust Fund is on the verge of insolvency, threatening widespread layoffs and delays of badly needed highway projects.

President Barack Obama has put forward a $302 billion plan to Congress to boost the fund with savings from proposed changes to corporate tax laws.

If no action is taken, the fund will dry up before the end of September. Officials in some states are already considering a halt to some projects.

“I feel it’s clearly a crisis,” said transportation secretary Anthony Foxx, who is on an eight-state tour to whip up public backing for the Obama plan.

The White House proposal is intended to put the fund on a longer-term footing than the bare minimum top-ups Congress has been voting in the past five years. Such minimum payments discourage states from making long term plans because of fears the fund will run out.

“We have a responsibility to put a proposal out there that casts a longer-term vision,” Foxx said. “Tell Congress we can’t slap a Band-Aid on our transportation system any longer.”

However, a highly partisan election year such as this doesn’t hold much promise for any major reforms.

“There doesn’t seem to be much of an appetite to go after corporate tax reform this year, which is the only long term funding source that has been proposed by both the administration and Congress,” said Joshua Schank, the president of Washington transportation think-tank Eno Center for Transportation. 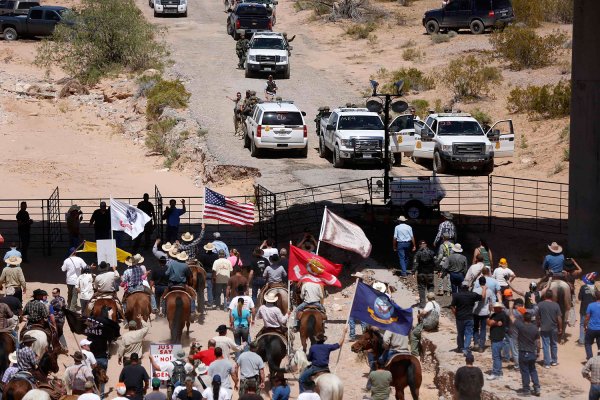 Feds Stand Down in Nevada Cattle Battle
Next Up: Editor's Pick