The Google logo is spelled out in heliostats (mirrors that track the sun and reflect the sunlight onto a central receiving point) during a tour of the Ivanpah Solar Electric Generating System in the Mojave Desert near the California-Nevada border February 13, 2014. The project, a partnership of NRG, BrightSource, Google and Bechtel, is the world's largest solar thermal facility and uses 347,000 sun-facing mirrors to produce 392 Megawatts of electricity, enough energy to power more than 140,000 homes.
Steve Marcus / REUTERS
By Sam Gustin

Google’s core online advertising business continues to generate gobs of cash, allowing the company’s braniac founders to pursue all manner of futuristic initiatives. From computerized eyewear to self-driving cars to robots and drones, Google continues to push the boundaries of technology in pursuit of “moonshots,” as the company calls its most audacious projects.

On Wednesday, Google will report earnings results for the first three months of 2014, and Wall Street analysts are hoping that good news from the company will be a positive sign for technology stocks, which have suffered recently. Over the last month, the tech-heavy Nasdaq index has fallen by 6%, with many big name companies, including Amazon, Facebook, LinkedIn and Twitter suffering double-digit declines.

Google hasn’t avoided the sell-off—it’s down 8% over the last month—but the company hasn’t been battered as hard as other tech companies, in part because investors remain confident about the company’s core strength in online advertising. “Google has actually hung in there quite well,” Paul Sweeney, a senior analyst at Bloomberg Industries, told Bloomberg West. “That reflects the fact that their core business continues to put up very good top-line revenue growth.”

Google continues to benefit from the relentless shift of ad dollars toward online platforms. Last year, U.S. online advertising revenues increased by 17% to hit an all-time high of $42.8 billion, exceeding broadcast television advertising revenues for the first time ever, according to the Interactive Advertising Bureau (IAB). In search advertising, which accounted for 43% of online ad revenue last year, Google remains dominant, with 67.5% of the search market, according to comScore. The next closest competitor is Microsoft, with 18.6% of the market.

Google is also a beneficiary of the ongoing shift away from traditional desktop computers toward mobile devices. For the third year in a row, mobile advertising revenues experienced triple-digit percentage growth according to IAB, increasing to $7.1 billion during 2013, a 110% jump from $3.4 billion in the 2012. Mobile advertising accounted for 17% of 2013 revenues, compared to 9% in 2012. Google’s Android mobile operating system accounted for 79% of global smart phone market share in 2013, according to Strategy Analytics.

“We continue to believe that Google is one of the best-positioned stocks for many of the secular growth drivers in the Internet space: the dramatic Mobile shift, the migration of TV ad budgets online, the growing importance of local Internet, and the Internet of Things,” Mark S. Mahaney, a technology analyst at RBC Capital Markets, wrote in a note to clients this week.

Wall Street analysts estimate the Google will report earnings of $6.39 per share, which would be a 10% increase compared to last year, on revenue of $15.52 billion, which would amount to an 11% increase, according to a Thomson Reuters survey. That would be a solid showing, but some analysts have expressed concern about Google’s profit margin, which has been under increasing pressure as the company pours money into its far-flung advanced research projects.

It’s those so-called “moonshots”—developed by the company’s secretive Google X lab under the leadership of co-founder Sergey Brin—that offer the most intriguing indication of where Google is headed in the future. This week, Google offered its Glass wearable computing product to the general public for the first time. At $1500 per unit, Glass remains out of reach for many consumers, and it remains unclear if the device will catch on with the broader public.

But Glass may only represent a glimpse of things to come. Earlier this year, Google filed a patent application for a contact lens with a built-in micro-camera that could be controlled by blinking. Such a product is most certainly years away from the market, but the patent application offers an indication of the scope of Google’s ambitions. In the nearer term, Google plans to focus on more conventional forms of wearable computing. Last month, the company announced Android Wear, an initiative that extends the operating system to wearable devices, starting with watches.

Google has also made clear that it plans to focus on robots and drones. Google’s self-driving cars have been well documented. Late last year, the company acquired Boston Dynamics, an engineering firm that has developed robots for the Pentagon. (Google said it will honor existing military contracts, but it doesn’t plan to take on new ones.) It was Google’s eighth purchase of a robotics company in six months, and although the company’s robotic ambitions remain vague, potential applications include manufacturing and logistics.

And this week, Google purchased Titan Aerospace, which manufactures solar-powered drones designed to stay aloft for years without landing. In a statement, Google said that such atmospheric satellites “could help bring internet access to millions of people, and help solve other problems, including disaster relief and environmental damage like deforestation.” Facebook, which is also interested in using drones to deliver Internet access, had been in talks with Titan, but was outbid by Google.

Wall Street analysts have occasionally expressed concern that Google’s futuristic projects—from wearable devices to robots to drones—could cause the company to lose focus on its core online advertising business, which is the main driver of shareholder value. But with Google continuing to dominate the online search market, and continuing to capitalize on the inexorable shift of ad dollars toward the Internet and mobile devices, investors seem content to go along for the ride. 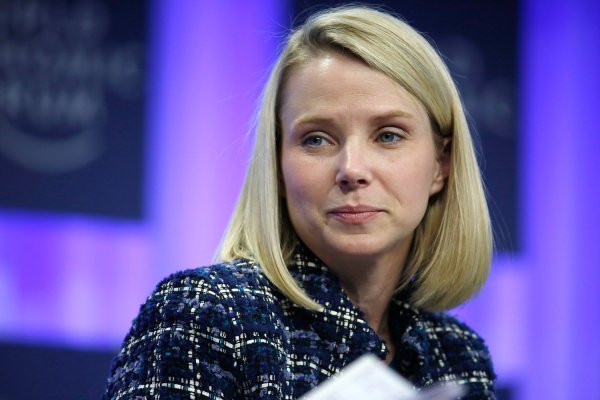 Yahoo Continues Its Slow Ascent
Next Up: Editor's Pick