A policeman stands guard during a ceremony commemorating the first anniversary of the Boston Marathon bombings in Boston, on April 15, 2014.
Xinhua/SIPA USA
By Nolan Feeney

Authorities have charged a male suspect with disturbing the peace, possessing a hoax device and disorderly conduct after he left two unattended backpacks near the Boston Marathon finish line Tuesday, the Boston Police Department announced:

Police evacuated the area Tuesday evening, and a bomb squad was called to investigate the scene. According to local news reports, one of the backpacks was allegedly left by a barefoot man shouting “Boston strong” before police removed him from the area.

Police spokesman David Estrada said there did not appear to be any evidence that the bags were explosive or dangerous but that police take reports of unattended bags very seriously, the Boston Globe reports. A nearby train station was also shut down.

The discovery of the bags occurred exactly one year after a bombing of the 2013 Boston Marathon killed three people and injured 264 others. 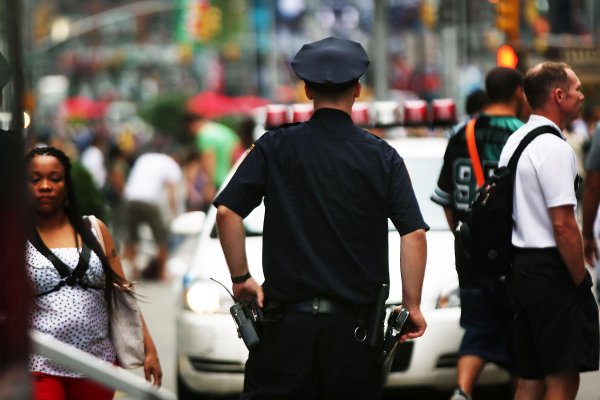 NYPD Disbands Unit That Spied on Muslims
Next Up: Editor's Pick