Ukrainian troops on the outskirts of Izyum, in eastern Ukraine, on April 15, 2014
Sergei Grits—AP
By Simon Shuster

Like many of the leading men in Ukraine’s new military pecking order, Petr Mekhed wasn’t exactly ripe for the task of fending off a Russian invasion when he assumed the post of deputy defense minister in February. His last tour of combat duty was about 30 years ago, during the Soviet war in Afghanistan, after which he reached the rank of colonel in the Red Army. When revolution in Ukraine broke out this winter, his wartime experience made him better equipped than most at defending the barricades of the Maidan protest camp in the center of Kiev. But it was not as useful in preparing him to lead his country into war. “For some issues I’ve had to sit down with a book and study up,” he says.

His conclusion so far is an unsettling one for Ukraine’s political leaders. If they want to find a way out of their conflict with Russia, which edged closer on Tuesday to military confrontation in the eastern region of Donetsk, they have only one way to do it, Mekhed says, and that is to negotiate. “We’ll never get anywhere through the use of military force,” he tells TIME. It would be much more effective to undercut Russia’s support for the local separatists by meeting them halfway, Mekhed suggests, with an offer of more autonomy for Ukraine’s eastern regions. “Our chances of saving Donetsk are now in the hands of our politicians and their ability to sit down with the people there and talk to them.”

But those politicians don’t seem to agree. On Tuesday morning, Ukraine’s interim president, Oleksandr Turchynov, launched the first military action against the pro-Russian gunmen who seized parts of Donetsk over the weekend. The assault, which the central government in Kiev termed an “anti-terrorist operation,” reportedly involved more than a dozen armored personnel carriers, as well as helicopters and military trucks that faced off against 30 gunmen for control of an airport near the town of Kramatorsk.

So was Ukraine ready for that kind of stand-off? Maybe. But some of its top military and intelligence officials highly doubt it that it is ready for the likely fallout, and whatever support Tuesday’s operation garnered from the White House will probably not translate into much military assistance from the West. More likely, it will provoke a Russian counter-strike, not from the small group of Russian special forces who have apparently been leading the separatists in Donetsk, but from the full weight of the Russian military. That would mean game-over pretty quickly for Ukraine.

So far, its leaders seem to be enjoying their taste of victory. When reports came back to Kiev that Tuesday’s operation was a success – that the Ukrainian forces had managed to repel the separatist attack on the airport – Turchynov made a self-congratulatory statement to parliament. “I’m convinced that there will not be any terrorists left soon in Donetsk and other regions and they will find themselves in the dock – this is where they belong,” he said.

That did not go over well with Vladimir Putin. In a phone call on Tuesday night with U.N. Secretary General Ban Ki-moon, the Russian President said the crisis in eastern Ukraine had “sharpened drastically” and stressed that the world “must clearly condemn these anti-constitutional actions.” The world, of course, did no such thing, nor has it done much to help Ukraine prepare for what’s likely coming.

In early March, when Russia had just begun its military occupation of Ukraine’s Crimean peninsula, Mekhed, a small, soft-spoken man with silver hair and a slight stutter, made his first official visit to Brussels to hold talks with the NATO alliance. He had no illusions about any of the Western powers coming to Ukraine’s defense, but he held out hope for some help with communications and intelligence. “We have problems with figuring out what forces are where,” he said, referring to the Russians. “On top of that, our weapons systems are by and large tied up with Russia, with cooperation with Russia.”

That makes upgrading those systems extremely difficult for Ukraine. In recent years, its military infrastructure has been “systematically destroyed” through the neglect, corruption and malfeasance of Ukraine’s former leaders, says Mekhed, but bringing them back to working order would require buying up spare parts from Russia, which Moscow has unsurprisingly refused to sell.

On Tuesday afternoon, a few hours before the clashes near the airport, the Russian Defense Ministry announced that it was suspending all military supplies to Ukraine. “May I remind you that Russia has committed not to provide, or to show restraint in providing, weapons to conflict zones,” Russia’s deputy minister of defense, Anatoly Antonov, said in a statement explaining the decision. (His caveat about “restraint” was apparently meant to make room for Russia’s ongoing sale of weapons to Syria during its civil war.)

In those conditions, Ukraine would be unable to repair much of its military hardware even if it had help from NATO; none of the members of that alliance use or produce the kind of kit that Ukraine needs. “The spare parts all come from Russia,” says Mekhed. “So we have to find new markets to find similar equipment to arm our troops, and not only weapons, but also training of the servicemen before we can put those weapons on the battlefield.”

That would take months or years, not to mention billions of extra dollars that Ukraine’s nearly bankrupt economy cannot spare. It is already having enough trouble with the relatively faster and cheaper task of bringing its intelligence services up to scratch. Much like the weakness of its military, Ukraine’s failures in the field espionage have a lot to do with its fraternal ties to Russia. “We even have an agreement on the books that forbids our [military intelligence] agencies from working against each other,” says Igor Smeshko, who served as head of Ukraine’s State Security Service from 2003 to 2005. “We could never have imagined that our Russian brothers would ever fight a war against us,” he says. “We could never have thought that just when we’d been bloodied from fighting our own tyranny here at home, that we would get a knife in the back from the Russians.”

In retrospect, that abundance of trust looks painfully naïve, but it goes far in explaining why Ukraine let its intelligence work lapse in recent years, particularly near the border with Russia. That mistake has left it particularly ill equipped to deal with the current phase of the conflict with Russia. Over the past few days, the troops who have been seizing police stations and other government buildings borne all the hallmarks of Russian special forces who have removed the insignia from their uniforms – the same tactic Russia used during its conquest of Crimea.

The most effective way for Ukraine to counter that kind of semi-clandestine invasion, says Smeshko, would be to deploy small, mobile teams of special operations troops, the kind that Ukraine’s intelligence services should have at their disposal, to isolate and arrest the Russian saboteurs. “Only special forces can go up against special forces,” he says.

Instead, the government in Kiev seems to be employing a mix of Interior Ministry police and military troops, and on Tuesday morning, it also sent its first batch of national guard volunteers, with little or no apparent training, to help fight separatism in eastern Ukraine. “The troops have a high fighting spirit,” said Andrey Parubiy, the head of Ukraine’s National Security and Defense Council, in dispatching them to the east. “It’s not easy over there,” he wrote on his Facebook page. “But I’m sure we will win, because with us is God and Ukraine.” (Before assuming one of his country’s most senior military posts in February, Parubiy had zero military experience of any kind other than his work protecting the protest camp in Kiev this winter. His Russian counterpart, Nikolay Patrushev, is a hardened 17-year veteran of the KGB who oversaw Russia’s scorched-earth conquest of Chechnya in 1999-2000.)

The mismatched forces now facing off in eastern Ukraine also present a potential risk to the locals. In the past few days, the pro-Russian separatist troops have proven adept at blending in among mobs of civilians, who have done the heavy lifting in the occupation of numerous government buildings across Donetsk. The military forces Ukraine has now sent to evict them are not trained to pick out the organizers of those attacks from among the throngs they use. “And that is the one thing our strategic opponent is waiting for, a picture of mass bloodshed,” says Smeshko.

Considering how little room for error Ukraine has in this operation, Mekhed should perhaps feel lucky to be focusing on a different part of the battlefield. Russia’s annexation of Crimea left thousands of Ukrainian servicemen marooned on that suddenly foreign peninsula, and Mekhed has been in charge of securing their return to mainland Ukraine. At the briefing he gave to reporters on Tuesday in Kiev, he focused mostly on all that this effort entails, such as the purchase of sleeping bags, sleeping mats and camouflage netting for all the displaced troops.

“We have to evacuate all of our servicemen and equipment from Crimea, to save what we could salvage from there, to set up new garrisons, and all of that is a whole lot of work,” he told me after the briefing at a Kiev hotel. “So believe me, Russia’s actions have already set us back years.” And that may just be the beginning. 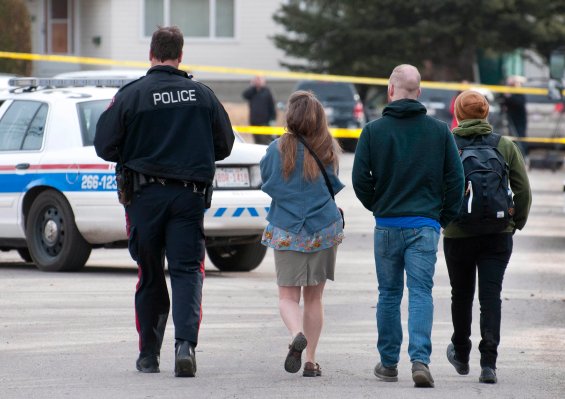 5 Dead in Calgary Stabbing
Next Up: Editor's Pick