Rape Is a Weapon in Burma's Kachin State, but the Women of Kachin Are Fighting Back

Galau Dau Yang, 35, stands outside her home in the northern Shan State village of Kut Khaing. Galau Dau Yang, who is ethnically Kachin, was gang-raped by police. Like in most conflict zones, human rights organizations report that rape is being used as a weapon by the military and police in Kachin State and neighboring Shan State, where many of the refugees have fled
Diana Markosian—Reportage by Getty Images
By Katya Cengel / Kachin

She had just finished describing how she had been raped by two men, dressed as policemen, when more police showed up. These police weren’t wearing uniforms, but everyone in the village in Burma’s northern Shan state knew who they were. And that’s when I stopped asking the questions and started being questioned myself.

We told the police we had read about the rape case on the Internet. That was the advice of a pastor who was the real source of our information and who had coached us on how to respond if we ran into the authorities. Before the policemen took us to their headquarters, we were able to briefly speak privately with the victim, 35-year-old Galau Dau Yang.

I asked her a single question: Did she think she was raped because she was Kachin?

Her answer was frank: “Yes.”

All the villagers knew we had come to hear Galau Dau Yang’s story. And so did the police who interrupted our interview. Galau Dau Yang said they were the same ones she reported the rape to more than a month before. The ones who assured her the culprits would be found.

The Kachin are a majority Christian people concentrated in the north of Burma with their own language, customs, and army. Since the breaking of a truce in mid-2011, fighting between the Kachin Independence Army (KIA) and the Burmese military has killed hundreds and displaced more than 100,000. In common with many conflict zones, human rights organizations report that rape is being used as a weapon by the military and police in Kachin state and neighboring Shan state, where many of the refugees have fled.

A recent report on rape by the Women’s League of Burma was widely covered by the local and international press. The report claims sexual violence is being used as a tool by the military against ethnic communities, citing more than 100 documented cases of rape committed by Burma’s army since 2010, the majority in Kachin and northern Shan.

Of these cases, almost half were gang rapes and 28 of the victims were either killed or died later from their injuries. Several of the articles referenced the story of a seven-year-old victim whom we also met. Her widely publicized case was moved from military to civilian court — a huge victory for Kachin activists fighting for greater transparency.

“We have to voice such kind of cases, just to get the word out to civil society,” said Ja Seng Hkawn Maran of the Kachin Women’s Union and the daughter of the late Kachin leader Maran Brang Seng. She believes the rapes are an official Burmese military dictate and the only way to stop them is by documenting them: “That is why we are shouting.”

The authorities deny this vigorously. In an email translated from Burmese, government spokesman Ye Htut said that the army and police do not use sexual assault as a weapon. Individuals who commit rape are punishable by both civilian and military law, he explained, depending on where the crime occurs.

“According to our custom, religion and tradition as well as ethics, the military are never permitted or encouraged to do these things,” he wrote. “This is unacceptable because soldiers also have mothers, wives, daughters and nieces. And nobody protects the criminals.”

But Akila Radhakrishnam, senior counsel with the Global Justice Center, says that there are very few modern conflicts that don’t include rape, because sexual violence against women is an easy way to erode the resilience of a community under attack. It happened in Rwanda. It happened in Yugoslavia. It is happening in Myanmar.

The settlement where Galau Dau Yang lives with her husband and four children was established more than 20 years ago by Kachin fleeing the conflict. Like most in this hilly region near the border with China, Galau Dau Yang’s husband is a farmer. He is also an opium addict and has been for the last five years. It is a common problem in the region.

The men who came to Galau Dau Yang’s home and said they were police told her they were looking for drugs. She replied that she didn’t have any and that she hadn’t seen her husband in days. They searched the house anyway. Then they strip searched her and took turns raping her vaginally and anally, she said. Before they left they took her clothes, threatening to use them in framing her on drugs charges if she went to the authorities.

A diminutive woman with wispy bangs and a gentle smile, Galau Dau Yang went anyway, first to the hospital, then to the police. She wasn’t alone in her willingness to come forward. Other Kachin women, overcoming feelings of humiliation and the fear of publicity, have bravely done the same. Radhakrishnam calls this openness “particularly unusual.” David Scott Mathieson, a researcher for Human Rights Watch’s Asia division, said it is reflective of the conflict, “which has radicalized the Kachin.”

Galau Dau Yang also went to her pastor, Hkun Sun. Religion is one of the battlelines in this predominately Buddhist country and Kachin pastors are called upon to give both earthly and spiritual leadership. Hkun Sun was the one who told the wider world about the case, believing the more people who knew the harder it would be for the case to be covered up. Galau Dau Yang, he said, is sacrificing her privacy for other women.

It was another pastor, Naw Zed Aung, who introduced us to Brang and his wife Roi, whose daughter — the seven-year-old — had also been raped. Brang said they decided to tell their story because “We talked to the pastor and the pastor encouraged us to tell everyone.”

Like so many others, Brang settled in his village in the hills of northern Shan state years ago, after fighting forced his family to flee their original village. Clad in a longyi, the traditional wrap-around skirt worn by men, and a U.S. Army jacket, he lives with his wife and five children in a two-room bamboo hut with a dirt floor. A wood fire heats the place and the children’s toys include a shampoo bottle top and dried corn husks. The seven-year-old victim uses corn husks to etch pictures of stars in the dirt in front of her home. She has very short hair and likes the color yellow. Since the rape, her parents said she does not play with her siblings and friends like she did before.

She was home alone watching the youngest of her siblings, an eight-month-old baby girl, when a soldier approached her and asked if she was a boy or a girl. When she told him she was a girl, he carried her to the bedroom. When she shouted for her mother, he slapped her. After he was done, she ran to a nearby field where her mother was harvesting rice. Later, she told her mother what had happened, how the soldier had taken off his clothes and lay on top of her and how much it hurt. A medical examination revealed swelling in her vagina.

The soldier was taken to the police station and later transferred to the custody of the military police. Normally, the case would have ended there. “Jurisdiction for military crimes is completely outside civilian court, and the military within the constitution is also accorded amnesty for its crimes,” explains Radhakrishnam.

This time, however, things were different. When weeks passed with no word about what had happened to the soldier who raped Brang’s daughter, the local community sprang into action. They spread the word through their network of pastors, activists, media professionals and politicians. Eventually a trial was held in civilian court — the first such trial that anyone can recall. The prosecution provided a medical report, the girl’s underwear and 11 eyewitnesses, said Khaung Zay, a lawyer for the prosecution. The soldier was sentenced to life in prison — another first.

There was a short lived euphoria, followed by the realization that so long as the conflict continues, the use of rape as a weapon will also. And the case, of course, will never close for the victim and her family. “Even though she doesn’t speak about it, we know she is unhappy and we are also unhappy,” says Brang. Rape victims serve a lifetime sentence too. 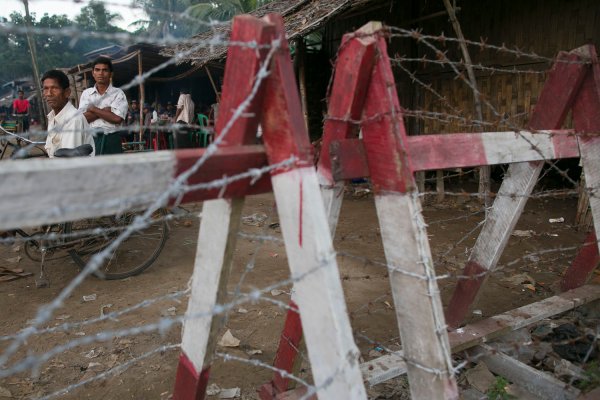 Burma's Rohingya Are Now Being Forced to Live in Squalid Ghettos Watched by Guards
Next Up: Editor's Pick