“There is no rational reason to take away someone’s voting rights because they committed a crime,” Holder said at a conference at Georgetown University. When laws prevent people from voting, Holder said, the country falls “short of the bedrock promise of equal opportunity and equal justice.”

Holder said it was time to nix laws that disenfranchise those who are no longer under state or federal supervision. He called restoring the right to vote a fundamental part of the prisoner reentry process and said denying voting rights makes it more likely former inmates will commit future crimes.

“These restrictions are not only unnecessary and unjust, they are also counterproductive,” Holder said. “By perpetuating the stigma and isolation imposed on formerly incarcerated individuals, these laws increase the likelihood they will commit future crimes.”

Holder said such laws prevent about 5.8 million people from voting, including 2.2 million African-Americans. One in 13 blacks are banned from voting because of the laws, a ratio that increases to one in five in states like Florida, Virginia and Kentucky. Currently, 11 states deny former prisoners the right to vote, though 23 have enacted laws since 1997 that restore voting rights. 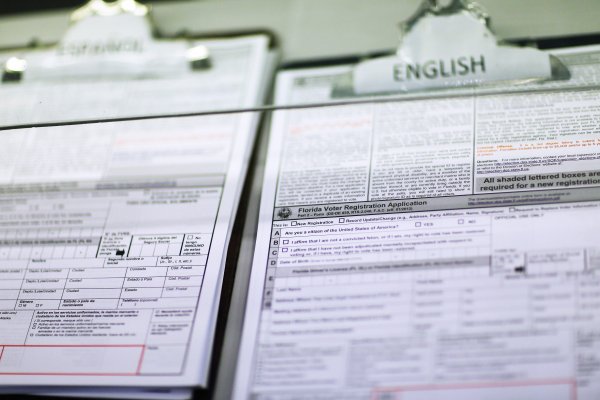 Obamacare Voter Registration Criticized By Left and Right
Next Up: Editor's Pick