Construction equipment is useful for digging through soil, erecting new buildings and … engaging in the largest Jenga competition known to man. Ok, it’s not technically Jenga—we’re guessing nobody wanted to to pay Hasbro for licensing rights—but construction company Caterpillar has released a new ad featuring much of its commonly seen construction equipment squaring off to stack giant wooden blocks into a tall but precariously balanced tower.

The ad features a variety of the vehicles you see on the side of the road every day, including excavators and a forklift-crane contraption called a telehandler, being used to precisely slide the wooden blocks around in what Caterpillar calls “the world’s largest board game.” The 27 blocks weigh 600 pounds each, and watching these giant machines gently poke and prod them has all the tension of the best Jenga matches. The final outcome of the game is, of course, inevitable.

According to Caterpillar’s website, the wooden-block-game-that-is-not-Jenga took 28 hours to complete in an arena larger than two NFL football fields. The blocks were sprinkled with shuffleboard wax so they could slide around more easily. Expect more machine stunts from Caterpillar soon. The company says “Stack” is the first in a series of short films that will put the company’s equipment through a series of unusual trials. 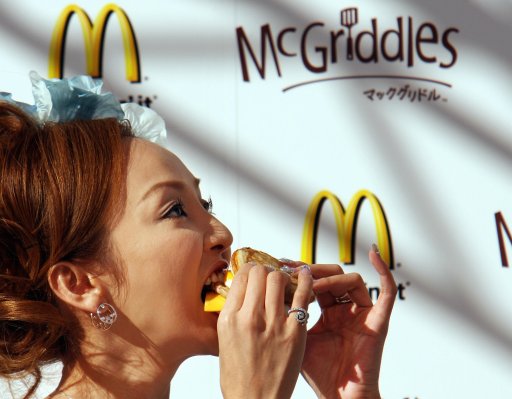 McDonald's Is Taking On the Waffle Taco With This One Sandwich
Next Up: Editor's Pick