A scientist separates blood cells from plasma cells to isolate any Ebola RNA in order to test for the virus at the European Mobile Laboratory in Gueckedou, April 3, 2014.
Misha Hussain—Reuters
By Alexandra Sifferlin

Guinea’s health ministry says deaths from its recent Ebola outbreak have slowed, and the latest flare-up of the virus is close to being under control.

The disease has already killed 106 in Guinea and spread to neighboring countries in Western Africa, but Rafi Diallo, a spokesman for Guinea’s health ministry, told Reuters that the number of new cases have fallen dramatically. Once there are no more new cases, the outbreak can be considered under control. The World Health Organization (WHO) says it could take two to four months for the outbreak to be entirely contained, Reuters reports.

There is no known cure or vaccine for Ebola, which is known to kill up to 90 percent of the people who contract it. The virus spreads through direct contact with bodily fluids, including blood, feces or sweat. The disease can spread via sexual contact or unprotected interaction with contaminated corpses.

Although the virus remains a significant concern, the WHO is confident it will be contained. Since the majority of people who get the disease will die from it, there’s not too much time for it to spread, as long as health workers can quickly identify who has come in contact with a sick person. WHO’s media spokesperson in Guinea, Tarik Jasarevic, told TIME last month: “We know this disease. It’s not the first time we’ve seen it so we know the measures we can take. It’s not a new disease.” 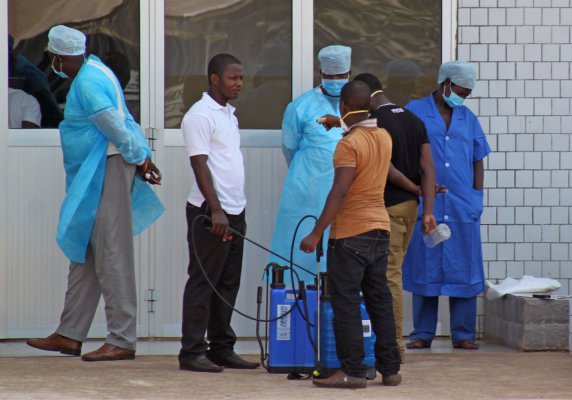 Guinea's Ebola Outbreak Spreads to Liberia
Next Up: Editor's Pick