A government official from Borno state told the BBC that around 100 girls had been taken from a local school school to the east of the country. The BBC had previously reported that 200 girls were abducted based on reports from parents, but they have since revised their count. The AP also reported that 100 girls were taken, although some were able to escape from the back of the open truck after grabbing onto low hanging branches to swing out of the slow moving vehicle.

The attackers are thought to be from the Islamist terrorist group Boko Haram.

The girls were reportedly ordered into trucks and driven away. Local media is reporting that two members of the school’s security were killed and there were many other properties that were burned down during the attack, the BBC reports. It’s at least the second major attack on a school in Nigeria this year.

On Monday, bombings in Abuja, Nigeria that killed 70 people were also blamed on Boko Haram. The extremist group is opposed to Western education, and wants to turn Nigeria into an Islamic state. Over 1,500 deaths this year are blamed on the group.

This post was updated to reflect the revised number of girls who were abducted as well as new information from government officials.

MORE: Another Deadly Blast in Nigeria As Country’s Stability Erodes 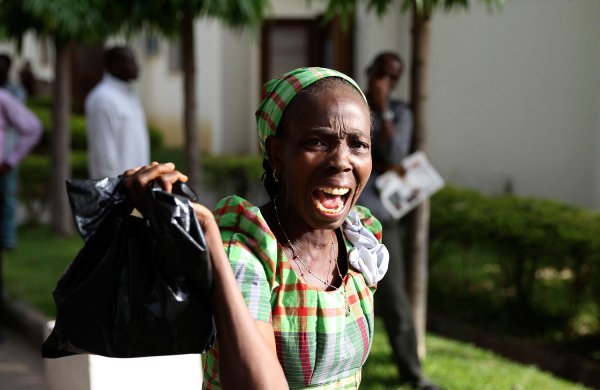 Horror in Nigeria as Blast Kills 71
Next Up: Editor's Pick