Bluefin-21 is hoisted back on board the Australian navy ship Ocean Shield. Its search on Monday had to be aborted after six hours because it encountered water depth beyond its operating limits
U.S. Navy/Reuters
By Charlie Campbell

The unmanned submarine hunting for wreckage from Malaysia Airlines Flight 370 started its second mission on Tuesday after it was forced to abort its first foray to the depths of the southern Indian Ocean after just six hours on Monday.

“After completing around six hours of its mission, Bluefin-21 exceeded its operating depth limit of 4,500 meters and its built-in safety feature returned it to the surface,” read a statement from Australia’s search coordination agency. On Tuesday, the crew tweaked the search zone so that Bluefin would steer clear from the deepest water.

Bluefin-21 was deployed Monday evening after investigators looking for the missing Boeing 777 came to the conclusion that the jet’s black-box batteries had finally expired, thus rendering them incapable of emitting signals that could be detected on the surface.

The Malaysia Airlines aircraft disappeared on March 8 en route from Kuala Lumpur to Beijing with 239 people on board and is presumed to have crashed in the southern Indian Ocean 1,550 km (960 miles) northwest of Perth.

The unmanned Bluefin-21 was supposed to scour the seabed for some 16 hours before returning to the surface, but the seabed where the plane is thought to have entered the water lies 4.5 km (2.8 miles) deep, at which point the water pressure impinges on the submarine’s functionality.

U.S. Navy Captain Mark Matthews told CNN the vehicle was programmed to hover 30 m (100 ft.) over the bottom while scanning with sonar, but the water may in fact have been deeper than the maximum of 4,400 m (14,400 ft.) listed on ocean charts.

“It happened in the very far corner of the area it’s searching,” he said. “So they are just shifting the search box a little bit away from that deep water.”

Data from the U.S-made device was analyzed on the surface Tuesday, but nothing of interest was uncovered, and operators prepared to launch a second mission to the deep.

“Maybe some areas where they are doing the survey are a little bit deeper than they are expecting,” Stefan Williams, a professor of marine robotics at the University of Sydney, told the Associated Press. “They may not have very reliable prior data for the area, so they have a general idea. But there may be some variability on the sea floor that they also can’t see from the surface.”

On Monday, officials confirmed that the cell phone of co-pilot Fariq Abdul Hamid made contact with a telecoms tower in Malaysia about the same time that the plane disappeared from radar. However, there is no indication that any communication was attempted.

On Tuesday, airplanes and vessels combed some 62,000 sq km (24,000 sq. mi.) of ocean — an area roughly the size of West Virginia — around 2,200 km (1,350 miles) northwest of Perth in search of debris. However, sea swells up to 2 m (6.5 ft.), scattered showers and thunderstorms hampered efforts. Thirty-nine days after the twin-engine jet disappeared, no wreckage has been found, and investigators have indicated they are close to calling off the airborne search, already the most expensive in history.

This post was updated to reflect that the search was continued on Tuesday. 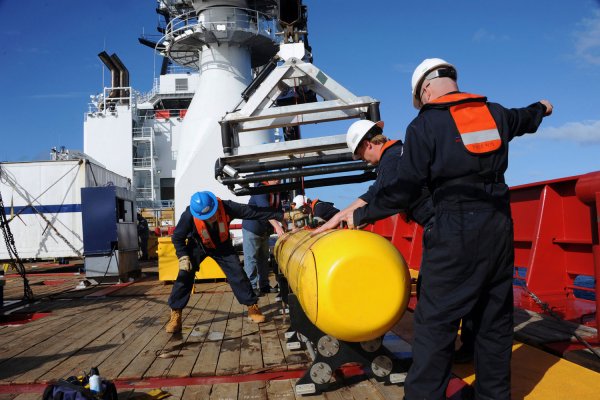 Missing-Jet Search Dips Underwater With Submarine
Next Up: Editor's Pick