How to Be Popular Without Being Mean: The Method That Got a Girl a Book Deal

Maya Van Wagenen made news last fall when DreamWorks optioned her memoir — a big achievement for anyone, but more so for Van Wagenen, who turns 16 in June. Her book, Popular: Vintage Wisdom for a Modern Geek (out April 15 from Dutton Children’s Books), tells the tale of her eighth grade year, during which she decided to follow advice from a 1950s popularity guide by teen model Betty Cornell and see where it got her.

Not all of the advice is the kind of stuff you’d expect to help a modern middle schooler — Van Wagenen had to wear long skirts to school, following the book’s advice, and the only eye makeup she was permitted was some Vaseline on her lids — but it’s hardly a spoiler to say that she learns some valuable lessons about social hierarchies. And her memoir becomes, like the book that inspired it, something of a teen popularity guide itself. It turns out that wearing weird clothes can actually help…as long as your definition of popularity is the same as hers, focused on having the most friends versus being at the top of the food chain. Though at first it seems that changing the definition is somehow cheating the system, Van Wagenen makes it work — and she says that adults to whom she’s spoken about the topic, from her family to her editors, tend to think that teen social systems are a lot more rigid than they are in reality.

Van Wagenen spoke to TIME about being popular, her book and advice for aspiring popular kids:

TIME: During the course of your experiment, you asked kids at your school to define “popular.” Did you ever come up with a final definition?

VAN WAGENEN: My definition of popularity changed throughout the experiment. At the beginning I was looking at the exclusive hierarchy at our school that guided everybody’s actions. It grew from that feeling of exclusion. But I was able to find a different definition that was more about being kind of people and reaching out and focusing on including everybody and being a friend to everyone, rather than the select few.

Can those two definitions exist at the same school?

I think the true definition of popularity is the inclusion. And I think when people are sometimes at the top of the school and considered very respected for their place on the social ladder, they tend to feel — well, from the experiment I did where I asked people if they considered themselves popular, the people at the top whom everybody else considered to be the most popular said they didn’t, so I think that comes through as the price of exclusion.

What about you? Do you consider yourself popular?

I’m much more able to make friends and more confident in myself, and I’m definitely pretty well known because of the book thing. That’s been interesting.

What do you think will happen when the book comes out?

For the most part I think the attention on me will die down and I’ll get to be normal again.

How do you balance being yourself and including everyone against Betty Cornell’s advice about more superficial stuff, like what to wear and how to eat?

When I did the experiment, doing the superficial things was really hard for me, because I’d never worn makeup before and I had to wear a certain type of clothing that set me apart. I bought a girdle! There were a lot of things that were very new and very scary for me. As I did each new thing, I was able to grow a little bit in my confidence. I would see someone sitting alone and because I’d gained enough confidence through putting myself in awkward situations I was able to say, you know what, I can do that.

Was there any Betty Cornell advice you disagreed with?

There were definitely things that didn’t work. The girdle, for example. But it made for some funny stories.

You write about the idea that being popular means “you have to be a ‘bitch’ to everyone except your ‘friends.'” You end up proving otherwise, but it’s a pretty common idea. Where do you think it comes from?

I think a lot of it has to do with the age group. In middle school everybody’s really struggling to find out who they are, trying to figure out where they stand and what kind of person they want to become, and so I think that’s kind of scary and they figure that they have to be intimidating to others as a way to gain respect. While I think the bully approach tends to make people scared of them, it’s not true respect and true friends.

What advice would you give an aspiring popular kid?

I would definitely say to smile. Smile at people and introduce yourself to one new person and remember their name. If you do that to one or two people a week you start to grow your friends.

Is being popular always a good thing?

It depends how you define it. With the definition I found, it’s always a good thing. 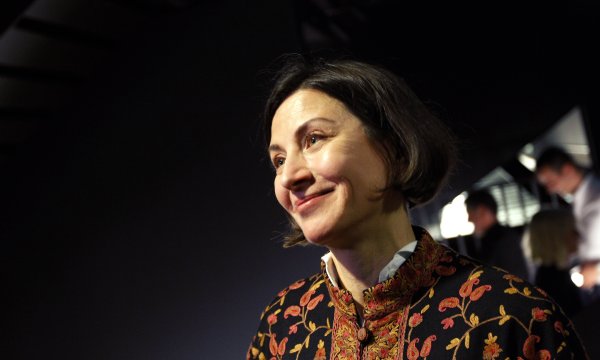 Donna Tartt Wins the Pulitzer for Fiction
Next Up: Editor's Pick