Al-Qaeda Splinter Faction Shows How Not to Be a Terrorist

Members of Iraq's Special Weapons and Tactics Team stand guard as blindfolded suspected members of the al-Qaida-linked ISIS are displayed at the federal police headquarters in Basra, Feb 11, 2014.
Nabil al-Jurani—AP
By Aryn Baker

It’s the kind of thing that could show up as a headline on The Onion: Suicide Bomb Trainer in Iraq Accidentally Blows Up His Class. It is a gift to Jon Stewart of the Daily Show. It has enlivened the usually grim litany of death and destruction that make up most Twitter feeds focused on Syria and Iraq. But even as the tale of a car-bomb demonstration gone awry invites chortles over the idea of preemptive payback, the circumstances should strike a note of sobriety. Twenty-one suicide bombers and bomb-makers recruited by the Islamic State of Iraq and greater Syria [ISIS], an al-Qaeda breakaway group, were killed in the explosion. Iraqi authorities, alerted to the camp’s location by the massive blast, captured another 23.

While that probably means 44 less bombers haunting the streets of Syria and Iraq, it also means that ISIS has become so strong that not only can it recruit platoons of volunteers ready to kill themselves for the terrorist cause, but that it was able to train them unmolested in a camp just 60 miles north of Baghdad. The revelation shows that “the terrorist groups have made a strong comeback in Iraq and that the security problems are far from over, and things are heading from bad to worse,” Hamid al-Mutlaq, a member of the Iraqi parliament’s security and defines committee told the Associated Press.

For nearly a year now ISIS, which used to be called al-Qaeda in Iraq until it expanded into Syria last April, has controlled vast swathes of Iraq’s Anbar province, where it has been able to reclaim an operational strength lost when U.S.-funded Sunni tribesmen turned against the organization at the height of the Iraq war. Its ranks swollen with an influx of foreign fighters drawn to the Syrian jihad as well as imprisoned former members who escaped in a series of well planned prison breaks, ISIS has achieved more than any other al-Qaeda affiliate. In April it helped topple the Syrian provincial capital of Raqqa, which it made its Syrian capital, and in December it took over parts of the Iraqi cities of Ramadi and Fallujah. And while no organization would last long if it relied solely on suicide bombers, ISIS has made their deployment — against Iraqi officials, Syrian regime targets and rival Syrian rebel groups — its signature calling card.

The training camp where the explosion took place was located in an orchard not far from the city of Samarra. According to the New York Times, who first reported the story, and the Associated Press, authorities searching the area in the wake of the blast also discovered heavy weapons, suicide bomb belts and at least 10 vehicles packed with explosives and ready to detonate. It’s not clear how long the camp had been in use, but it is likely that several waves of recruits had already passed through. And that is a worrying sign.

“The fact that the ISIS is able to recruit such a large number of suicide bombers and then train them all in one place should be of great concern,” writes terrorism analyst Bill Roggio for the Long War Journal. “How many more ISIS suicide camps are out there? Given the steady stream of suicide attacks the ISIS carries out in Iraq and Syria, the answer is likely enough that today’s work accident won’t make much of a dent in ISIS operations.”

As if to underscore his point, a bomb exploded near a café in Baghdad later that night, killing three and wounding 11. Though they have not yet claimed responsibility, ISIS has been behind similar attacks in the past. Even with one major explosives training cell incapacitated, those bombings are not likely to end anytime soon. 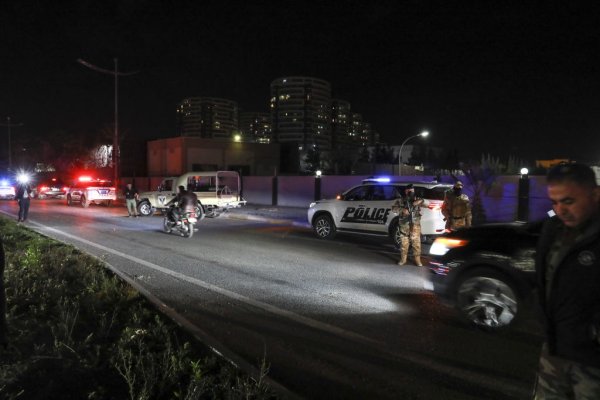