Obamacare Will Be Billions Cheaper Than Expected

The cost of expanding coverage under the Affordable Care Act will be billions less than previously expected, according to a report released Monday.

An analysis from the nonpartisan Congressional Budget Office found that the coverage provisions of the ACA, also known as Obamacare, will cost the federal government $104 billion fewer over 10 years than the CBO predicted back in February.

The revision is due almost entirely to a drop in the amount the federal government is expected to spend on subsidies to cover some or all of the cost of private health plans purchased through Obamacare’s insurance exchanges. Premiums for exchange plans sold in 2014 ended up being cheaper than the CBO predicted, partially because insurers marketed and sold plans with narrow networks that typically cost less.

Overall, the CBO expects the federal government will spend $1.38 trillion on the ACA’s coverage provisions between 2015 and 2024. That figure includes the cost of subsidies provided through the exchanges and Medicaid. It also factors in revenue from a tax on high-cost plans, as well as penalties collected from individuals without coverage and employers that fail to provide insurance to workers.

In 2014, the CBO predicts the federal government will spend $17 billion on subsidies to consumers who purchase private plans through exchanges, $20 billion on new Medicaid enrollees and $1 billion on tax credits for small business owners who provide employee insurance plans.

The CBO’s report also says 31 million U.S. residents will be uninsured by 2025, 26 million fewer than would go uninsured without the ACA. 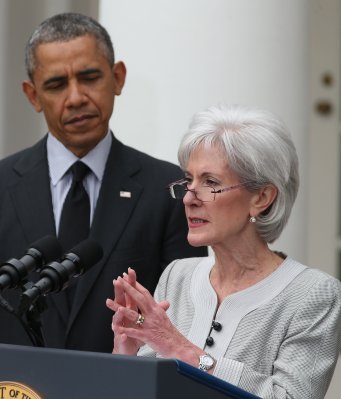 Sebelius: Obamacare Rollout Was ‘Terribly Flawed’
Next Up: Editor's Pick