When word got out on Wednesday that esteemed Palestinian-American journalist Shireen Abu Akleh was killed in the West Bank city of Jenin, where Israeli forces has been making military arrest raids, Israel convened its National PR staff to form a plan of action. It decided to circulate a video of a Palestinian gunmen shooting indiscriminately from inside the Jenin refugee camp and blame them for the Al Jazeera reporter’s death. But its strategy fell flat when another video revealed that Abu Akleh died nowhere near there.

Abu Akleh was a 51-year-old Catholic Palestinian who switched to journalism after studying to be an architect and became one of the Arab world’s most famous TV journalists. Most nights for 25 years, her face lit up millions of TV screens as she shared the stories of Palestinian people living under Israeli military occupation. Arab girls and women looked up to her. And foreign journalists who reported from the Palestinian territories held her in high regard. Now Al Jazeera has accused Israel of “assassinating her in cold blood” and Arab journalists from Washington to Tunisia to Syria are staging sit-ins. Qatar lit up a building with her image. Cartoons are circulating of Abu Akleh holding a bleeding microphone with an M-16 rifle pointed at it, the type of rifle used by Israeli soldiers. A few Arab parents have named their newborn daughters ‘Shireen.’ Abu Akleh has become a Palestinian symbol.

Read More: What We Know So Far About the Killing of Al Jazeera Journalist Shireen Abu Akleh

To Israel, her death risks damage to essential relationships in the Arab world, while Abu Akleh’s U.S. citizenship brings relations with Washington into the equation, raising both the stakes and the level of scrutiny. The State Department declared ” the investigation must be immediate and thorough and those responsible must be held accountable.”

Deny and deflect is Israel’s usual strategy for dealing with high-profile civilian deaths. The deflection has come in three forms: One is claiming Palestinians killed the civilian (famous examples are British cameraman James Miller, 10-year-old Abir Aramin, the three daughters and niece of Dr. Izzeldin Abuelaish inside their home in Gaza while he begged on live television for Israel to stop firing). Often Israel claims that the victim was near a site from which Palestinian gunmen were attacking Israelis and, hence, got killed by accident by Israeli gunfire (four Gaza children on the beach, 40 people taking refuge at a U.N. school in Gaza, the British U.N. worker Iain Hook in Jenin). Israel has also claimed that the civilian was involved in an attack on Israeli soldiers or was a member of a Palestinian militant organization (photojournalist Yaser Murtaja in Gaza). In other cases, Israel said that the facts around a killing are unclear, but definitely not Israel’s fault (Palestinian family killed by shell on beach in Gaza). In the case of the 2003 death of American pro-Palestinian activist, Rachel Corrie, who was run over by a military bulldozer, the Israeli army claimed “a slab of concrete” was likely what killed her. When Israeli missiles brought down an 11-story media building last year in Gaza, where Palestinian media networks and the Associated Press were located, Israel justified it by saying it was being used by Hamas.

Back in 2006, Israeli prime minister, Ehud Olmert, initially apologized for the killings of seven members of the Ghalia family in Gaza by Israeli artillery. “But the military swiftly realised it was confronting another PR disaster to rival that of the killing of Mohammed al-Dura,” wrote Guardian journalist, Chris McGreal, referencing the wrenching footage of the Gaza boy killed cowering beside his father during a 2000 firefight. “The army quickly convened a committee to investigate the deaths on the beach and almost as swiftly absolved itself of responsibility.”

Within a half hour of Abu Akleh’s killing, the Israeli state PR machine went to work on a deflection strategy. Israeli journalist Barak Ravid revealed in a Hebrew report on Walla! website that “there was an urgent consultation of the National Hasbara (PR) Headquarters together with representatives of the Prime Minister’s Office, the Foreign Ministry and the Israeli Defense Forces. They decided that the main goal was to try and fend off the narrative that was emerging in the international media, according to which Abu Akleh was killed by Israeli fire.” (The English version of Ravid’s report on the Axios website did not include this information.) So Israel used a short video that was filmed that morning by Palestinian militants in a residential area, in which the men were heard saying that they had shot a soldier. Bennett posted the video and claimed that, since no Israeli soldier was injured in Jenin that day, the footage was evidence that the militants had mistaken Abu Akleh, in her helmet and body armor, for a combatant.

But then Al Jazeera posted footage showing Abu Akleh face down on the ground in a less built-up area and her colleagues trying helplessly to reach her as bullets continued to fly. The word PRESS was visible in large letters on her protective gear. “We saw the soldiers in the area and there were no Palestinians there,” said producer Ali Samudi, who was also shot. The soldiers were about 150 meters away….I did not see who was shooting, but I see [sic] from where the bullets coming. They coming from the area where the soldiers. There were no fighters in the area.” Two hours later a local researcher for the Israeli human rights organization B’Tselem filmed a video geolocating the clip of the Palestinian gunmen in the Jenin refugee camp, hundreds of yards and several turns away from the spot where Abu Akleh was killed.

A Palestinian man looks at the front pages of local newspapers reporting on the death of veteran Al Jazeera journalist Shireen Abu Akleh, who was shot dead while covering an Israeli army raid in Jenin, West Bank, on May 12, 2022.
Hazem Bader—AFP/Getty Images

By then the U.S. Ambassador to Israel had confirmed that Abu Akleh was a U.S. citizen. President Biden is considering a visit to Israel and the Palestinian Territories in June. White House Press Secretary Jen Psaki called Abu Akleh a “reporting legend.” House Speaker Nancy Pelosi called her killing a “horrific tragedy.” Congress members Betty McCollum and Mark Pocan condemned it and Rashida Tlaib accused Israel of murder. Israel regrouped, the army quickly backtracking from its claim. On Wednesday evening, Israeli Defense Minister Benny Gantz was on a conference call with reporters, saying he was “very sorry for what happened,” that Israel wants to conduct a full-scale investigation and that he had asked the Palestinians to share the bullet that was found embedded in Abu Akleh’s head, promising to share all forensic findings with the Americans and the Palestinian Authority.

The Palestinians declined, saying they do not trust Israel—a point an Israeli minister appeared to concede in an interview with a Israeli radio outlet on Thursday. “Israel’s credibility is not great in situations like this,” said Diaspora Minister Nachman Shai.

When Palestinian Americans come to harm by Israeli forces, Israel is quick to investigate, but the process rarely ends in severe punishment. Four months ago, following a U.S. demand, Israel conducted an investigation into the killing of an elderly Palestinian-American man, who Israeli soldiers detained in the middle of the night. Omar Abdalmajeed As’ad had returned to Palestine after living in Milwaukee for almost 40 years. He died of a heart attack outside in the cold at a construction site where soldiers had left him on the ground, gagged with his hands tied tightly and his eyes covered, after beating him. The top commander of the unit was rebuked; the soldiers were not punished. In 2014, an Israeli policeman beat 15-year-old Tariq Abu Khdeir to a pulp and then put him under house arrest. The attack was caught on video. But it wasn’t until it was revealed that he was a U.S. citizen that he was allowed to return to Florida and Israel opened an investigation, at the demand of Washington. An Israeli judge sentenced the police officer to community service; the State Department expressed disappointment.

Abu Akleh was killed just days after the International Federation of Journalists, the Palestinian Journalists Syndicate (PJS) and the International Centre of Justice for Palestinians (ICJP) filed a formal complaint at The Hague for “systematic targeting of Palestinian journalists.” An estimated 50 Palestinian journalists have been killed since 2000, according to the PJS. Israeli forces have a “track record of employing lethal force and systematically targeting Palestinian journalists with complete lack of accountability,” said the ICJP. Four years ago, Haaretz journalist Amira Hass uncovered court files that revealed that in 2012 Israeli soldiers beat Palestinian journalists with batons and arrested them, on their commanders’ orders, with the declared intention of disrupting their coverage of a Palestinian demonstration. Last August, Israeli soldiers detained seven Palestinian reporters covering non-violent protests in the South Hebron Hills of the West Bank. During the May 2021 war, Israel said it bombed the Gaza City media building because it was being used by Hamas. But it produced no evidence, and the devastating strike also had the effect of discouraging reporting from the ground in Gaza, where 254 people were killed. Thirteen people in Israel were killed.

In Jenin, where Israeli forces were carrying out anti-terrorism operations after a spate of fatal attacks on Israeli Jews, hundreds of Palestinians carried Abu Akleh’s corpse from the morgue, wrapped in a Palestinian flag, her press flak jacket laid over her chest. IPriests prayed over her body. In Ramallah, it was received with a state marching band. A state funeral was held Thursday with burial on Mt. Zion in Jerusalem on Friday.

The next day, Thursday, unnamed Israeli officials told reporters that soldiers in a military vehicle had been about 150 yards from where the journalists were working, and fired repeatedly about the time Abu Akleh was killed.

With reporting by Simmone Shah/New York 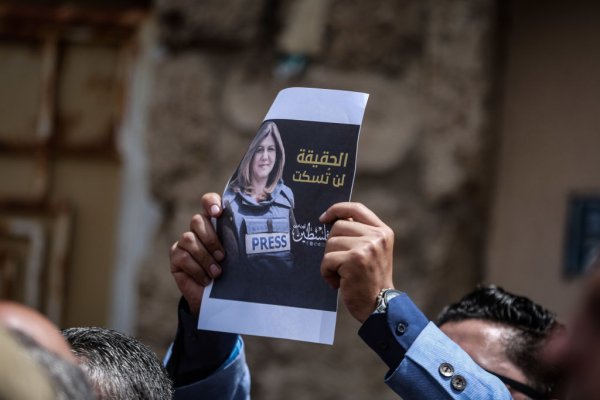