I Had an Unplanned Pregnancy, and a Choice

First, some caveats. As every woman who writes something on the internet knows, I must insert the appropriate number of “I love my kids!” “My kids are my life!” in anything that may be construed as complaining, lest the trolls start assembling. It’s true. I love my kids; my kids are (part of) my life. And in all seriousness, I don’t take any of this lightly. I know it may be a tough read. But I feel beholden to anyone out there who is experiencing something similar. So let’s proceed.

In September 2017, I found out my IUD had migrated (later, I would find out it had migrated into my colon) and I was pregnant. (It’s very rare for an IUD to migrate; if you have an IUD, check your strings!) At that point I had a 4-year-old and an 18-month-old. My novel had come out the month before, and there was some vague interest from Hollywood. I had “gotten my body back,” a phrase anyone who has given birth is intimately familiar with (the way a cartoon character is intimately familiar with the club crashing down on her head), a phrase which, yes, means I was in shape and feeling good, but which also means there was no child hanging from my breast, no dried spit-up anywhere on my person, no middle-of-the-night aches waking me a minute or so before my baby cried out from his crib. I had shaken off the relentless gray cloud that seemed to follow me home from the hospital after each of my boys’ births and that rained doubt and anxiety over my every decision. Now I could still see the cloud, but it was farther away from me. I had gotten my bearings. I had a Paragard IUD nestled firmly in my uterus. I was never getting pregnant again.

But I was pregnant, with a baby, yes, but also with rage and helplessness and the conviction that I did not want to be pregnant, that the cloud could not come back, that I was done, that I did not want this. (I love my kids.) “I want an abortion,” I told my husband, my voice shaking with anger and grief. Did mothers have abortions? In fact, six in 10 women who have abortions are already mothers. But I thought of the mothers and birthing parents I knew. My friends, my sister, my own mom. It didn’t feel like a question I could come anywhere close to asking.

In my doctor’s office, I held out hope that the test I had taken was wrong. And that the second and third tests I’d taken were also wrong. When she flapped through my chart and looked up at me and confirmed the pregnancy, her face seeming to expect joy, or at least neutrality, I burst into tears. “Do you … want to continue with the pregnancy?” she asked, handing me a box of tissues. I felt no judgment from her, no more expectation, just a human tending to another human, and for that I am forever grateful. “No,” I said, and I cried harder.

In a gentle, matter-of-fact tone, my doctor laid out my options. We couldn’t schedule an abortion at their Catholic attending hospital because it was against policy to terminate a pregnancy there. But there was another hospital where it could occur, if I waited long enough to need a surgical procedure. If I wanted to do it right away, I could simply take some pills. She put the prescription in; all I’d need to do was make the call and I could pick them up. She told me to stay in the room as long as I needed, that she’d let her staff know not to disturb me. I left quickly.

Before any decision was made, I needed to have an ultrasound, so they could locate the IUD and make sure it wasn’t an ectopic pregnancy. There, a few days after seeing my doctor, I saw the clump of cells fluttering, or what is commonly misconstrued as a heartbeat in those draconian laws requiring women to listen to or witness cardiac activity before aborting. The doctor prodded the ultrasound wand inside my cervix. He called in another doctor. They took turns wielding it, commenting on how strange all of this was, the door opening and shutting. When you’re pregnant, people handle your body like it’s not yours. It’s the baby’s, or it’s just a closet you rummage through, looking for something. They thought they could see the IUD, somewhere near my sacrum, and an embryo embedded not in my fallopian tube, but in my uterus.

I found my car in the parking garage, locked myself inside, and wept. I called my husband and said I was even more sure about terminating the pregnancy. Like the doctor, he handled me gently. At home, we talked about each possibility. At one point, whispering to each other while our sons napped, I asked him if we could even handle having another child. Immediately, he said yes. He was, I’m sure, thinking of future family moments: road trips, baseball in the backyard, inside jokes. But that’s not what I was asking.

What I was asking was this: Could I be pregnant again, age 37 to 38, attend monthly and then weekly doctor’s appointments, because my pregnancy was considered “geriatric” and therefore required further monitoring?

Would I survive the pregnancy? The maternal mortality rate was rising, and in my age bracket it was significantly higher than that of someone 25 and younger.

Could I watch my body expand and change yet again, becoming something other than mine, again?

Could I stomach the infantilizing and proprietary way the world treats me when I’m obviously with child? (And here I’m reminded of the breathtakingly stupid suggestion, on the part of one of our — female! — Supreme Court Justices, that rather than abort, a woman should carry the baby to term and then simply drop it off at the nearest fire station. And then, what, show up at the company picnic with a baggy abdomen and no baby? “Oh, that old thing?” this imaginary woman might say, “I dropped it at the fire station on my way here.” “Cool, no further questions!” society responds.)

Could we afford it? Pregnancy is expensive, and childbirth is even more so. Some families with insurance spend upwards of $5,000 if all goes well, $10,000 if the baby needs to be in the NICU.

Could we afford childcare? With our second child, I’d had to leave my job because paying for childcare for two children equaled the amount I was bringing home each month, essentially canceling out my income. And at that time, preschool cost thousands of dollars a year, something we were able to afford only because my husband’s mother paid for it. So, no, we could not afford childcare.

Could I commit to spending less time with my still very small children, because I’d be spending a lot of time feeding and changing and holding and endlessly, endlessly attempting to put the infant down to sleep? There’s a reason sleep is withheld as a torture device.

Could I handle what it would do to my career, to the very small amount of time I had to write already? With each baby, it had taken me about two years for my brain to settle enough to start writing again. Could I give up another two years?

Could I pay the sort of close attention each child deserves, given that my attention would now be split three ways?

Could I handle all the new ways I’d be a failure at this motherhood thing that society promises is natural and therefore a given, easy, a flipped switch as soon as the doctor crows, “Ten fingers and ten toes!”

And, could I handle the pitch-black depression? Could I figure out a way to adapt, to toss my family onto my shoulders and run us to safety from … me?

The choice was complicated. Heavy. Exhausting. And it was all mine. That I could decide, that I could consider all the options, all the possible outcomes, and from there make my own call, was immensely vital. It reminded me of the person I am inside the mother I am. In May 2018 I gave birth to my daughter. I plan on telling her this story one day.

By all counts, I’m lucky. I have a stable home and a partner who is as much a partner as one without mammary glands could be. Even so, motherhood comes at a cost. And we pay dearly for it. Our hair could fall out; we could lose our careers, suffer debilitating mental health consequences, and all of that is if things go mostly OK. We could also die.

Many of the birthing parents I told about my surprise pregnancy, from my family to my friends to strangers who read about it online, confessed that if it happened to them, they’d seriously consider abortion. I get it. I made one choice, and others may make different ones. And that’s exactly as it should be. Being a birth parent isn’t easy. Sure, it’s natural. It’s natural in the way that an antelope running for its life from a predator is natural, in the way that antelope watches its own intestines be ripped out is natural. But giving birth should be something we undertake by choice.

If we no longer have that choice, we’re no different than the antelope. Just a body waiting its turn to be ravaged. 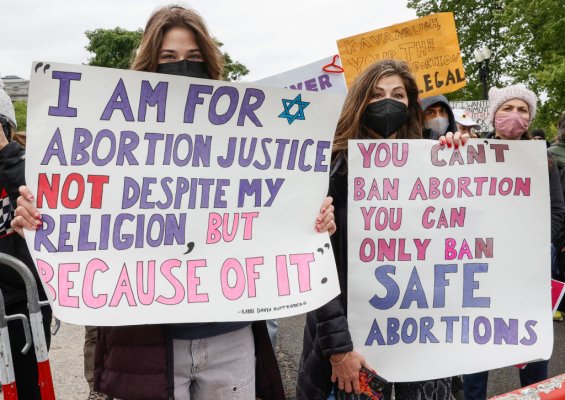 We Asked Hundreds of Americans About Abortion. Their Feelings Were Complicated
Next Up: Editor's Pick