Both pro-abortion rights and anti-abortion activists spent most of Tuesday scrambling to respond to a leaked draft of a Supreme Court decision that would overturn Roe v. Wade.

While the draft, first reported by Politico, is neither final nor legally binding, its release fundamentally upends the debate over abortion nationwide, experts say. The news encourages conservative legislators to further restrict abortion at the state level and injects a new cloud of confusion over would-be patients, potentially discouraging people from accessing abortions that are still legal.

Chief Justice John Roberts confirmed the authenticity of the leaked draft on Tuesday, but a spokesperson emphasized that the opinion, which would explicitly overturn the 1973 decision that established the national right to abortion, may change. Until the Court hands down a final decision saying otherwise, Roe v. Wade remains in effect.

Elizabeth Nash, who tracks state abortion policy for the Guttmacher Institute, a research firm that supports reproductive rights, says many people are likely confused about their current reproductive rights. “Most certainly some people will think abortion is banned,” she says. “And that’s why we’re seeing abortion providers and patient groups working doubly hard to remind people that abortion remains legal.”

Abortion providers and abortion funds said they’ve received a volley of calls on Tuesday asking whether abortion is still legal, and are currently working to help patients access care. “No matter what a court decides, no matter what law is passed or overturned, people have always needed and will continue to need access to safe abortion,” Dr. Bhavik Kumar, medical director of Planned Parenthood Gulf Coast told reporters on Tuesday. “Unfortunately, people of color, poor and low income people, young folks, undocumented people and those living in rural areas are suffering the most from these abortion bans.” Kumar is in Texas providing abortion services to patients this week.

Already, 13 states have laws known as “trigger bans” that would outlaw abortion if Roe is overturned, and six more have abortion bans that pre-date Roe but could also go into effect. When the Court heard oral arguments for Dobbs v. Jackson Women’s Health in December, advocates and experts on both sides came away expecting the justices would significantly roll back or overturn the 1973 decision.

Read More: The Battle Over the Future of the Anti-Abortion Movement if the Supreme Court Overturns Roe v. Wade

Since then, abortion opponents have jumped into action pushing more aggressive restrictions on abortion in anticipation of the high Court’s ruling. Between Jan. 1 and April 14, Republican-led states introduced 536 abortion restrictions in 42 states, according to Guttmacher. Last year, Texas passed its six-week abortion ban with a private enforcement mechanism that has since inspired other states to follow suit. Florida and Arizona passed 15-week abortion bans this year. Idaho passed a law modeled on Texas’ six-week ban. Kentucky passed a law imposing a host of new abortion restrictions that temporarily shut down the state’s abortion providers until a judge blocked the law. Oklahoma passed a law outlawing all abortions and is close to enacting two others that use Texas’ civil enforcement process.

While some state legislative sessions have now ended for the year, others like Missouri, Louisiana and Ohio are ongoing, and lawmakers could introduce new legislation or advance other bills in light of the leaked decision. “This leak has also energized abortion opponents, and so they are gearing up for the day when Roe falls,” Nash says.

Special sessions are common in state legislatures, and conservatives in several states have already said they want to reconvene lawmakers now that they expect the Supreme Court to overturn Roe.

South Dakota Gov. Kristi Noem tweeted on Monday that if the Politico report was true, she would “immediately call for a special session to save lives and guarantee that every unborn child has a right to life in South Dakota.” Republican lawmakers in Georgia and Indiana have called for their governors to convene special sessions once the Supreme Court rules, and Arkansas Gov. Asa Hutchinson said last month he was considering doing so too. And Florida Voice for the Unborn, a leading anti-abortion group in the Sunshine State, sent a letter to Gov. Ron DeSantis on Tuesday morning urging a special session there in light of the leaked Supreme Court draft.

Meanwhile, abortion rights supporters are also hoping the leak will embolden liberal lawmakers and voters to turn out in the midterm elections. Planned Parenthood Action Fund, NARAL and EMILY’s List recently announced they plan to spend $150 million ahead of the 2022 midterms, and abortion rights leaders noted on Tuesday that they had been inundated with calls and text messages from people asking how they can show up to help.

“We have been warning for decades about what is happening in this country in terms of abortion access,” Fatima Goss Graves, president and CEO of National Women’s Law Center told reporters on Tuesday. “I think this draft opinion leaked last night is making it real for people.”

Mini Timmaraju, president of NARAL, similarly called the leak a “wake up call” for groups across the progressive spectrum. “This week has given us a perfect opportunity to close the believability gap and really let people understand what’s at stake in this,” she said.

Abortion funds, the grassroots groups that help pay for and provide material support to people seeking abortions, are also expecting to see an influx of donations this week. Access Reproductive Care (ARC)-Southeast, a fund that serves six states across the South, received $5,000 just through its fundraising platform from Monday night until Tuesday morning, co-founder and executive director Oriaku Njoku said. While Njoku said that amount might not sound like a lot for national organizations, it is a huge amount for the group to raise in under 24 hours.

“What we’re telling patients, what has been our commitment to our community from the very beginning, is that we will do whatever we need to do to make sure that folks get access to the abortion care that they want and they need, that we’re doing our part to eliminate those barriers to abortion access by providing abortion funding and logistical support,” Njoku said. “And that is not going to change depending on what the laws are.” 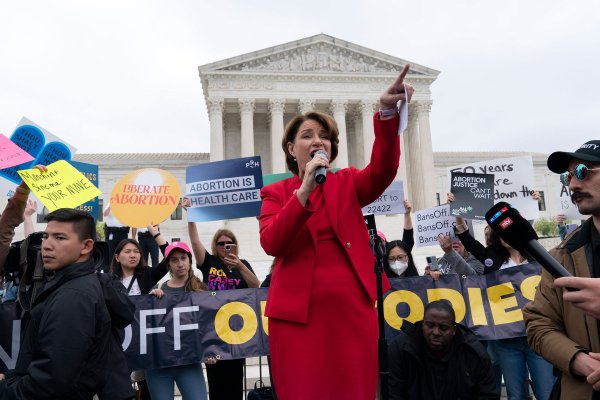 Democrats Can't Do Much to Protect Abortion
Next Up: Editor's Pick