Russia Produces a Third of the World's Diamonds. Now They're Coming Under Scrutiny

No one would ever call the atmosphere on Antwerp’s Hoveniersstraat relaxed. Each day, millions of euros worth of diamonds pass through the export offices and exchanges that line its 300 barricaded meters, and the traders who move along its length, clutching innocuous-looking plastic bags laden with gems, tend to eye outsiders with suspicion. But ever since the war in Ukraine began, Hoveniersstraat has been even more tense than usual. As the world’s oldest and largest hub for the trade, it—and Antwerp as a whole—has held its breath each time the European Union has announced a new set of sanctions against Russia. And now, with a sixth round imminent, traders in Belgium’s second largest city are again worried that their luck may soon run out.

Russia produces about 30% of the world’s supply of diamonds. And one company, Alrosa, is responsible for mining roughly 90% of those. Partially owned by the Russian government, Alrosa has ties to Russia’s military and nuclear industries, and is run by the son of a close Putin ally. Because of those connections, the U.S. and more recently the U.K., have put sanctions on Alrosa’s chief executive, Sergey S. Ivanov, and banned imports of the country’s diamonds as part of their efforts to punish Russia for its invasion of Ukraine. But the European Union, headquartered in a country that is home to the oldest and largest diamond trading hub in the world, thus far has not.

Read More: How to Buy an Ethical Diamond

“Peace is more valuable than diamonds,” Ukrainian president Volodymyr Zelensky told the Belgian parliament when, speaking by video conference in late March, he urged the country to cut off imports. There is little doubt that a significant proportion of the Belgian trade goes to the Putin regime, which owns 33% of the company outright (regional governments control roughly another third). Alrosa puts a third of its production on the market through Antwerp, and 20 of its 58 clients are based there. Of the $4.2 billion that the company earned in 2021, $1.8 billion came from Belgian sales. Although that number is much smaller than the $104 billion Russia earned in energy sales to Europe that year, it is higher than other Russian products the E.U. has already banned (like vodka, which generates $52 million).

Diamonds make up 5% of Belgium’s exports, and generate about 30,000 jobs in Antwerp, which helps explain—along with some reported industry lobbying—why, after some initial exploratory discussions around the time the war started about, the European Union has yet to table a motion on their inclusion. “In [the European] parliament we discussed it, and I myself was quite vocal about it because of the military connections,” says Kathleen van Brempt, Belgian member of the European parliament for the Socialist party which, like the Greens, is in favor of the sanctions. But in the executive bodies where any embargo would be decided, she says, “it has never to my knowledge been on the table so that they need to discuss and take a decision on it. And that, of course, is peculiar.”

Antwerp, a small port city with a population of half a million, has been closely associated with the gems since the 1500s. And although its importance as a hub for cutting and polishing diamonds long ago passed to other places–most notably India–it continued to control nearly all the world’s trade until the 1980s. Today, 86% of all diamonds still pass through the city at least once in their journey from rough stone through cutting and polishing to final setting in a necklace or engagement ring. But as a trading center, the city now faces increasing competition, primarily from Mumbai and Dubai.

Belgian prime minister Alexander de Croo has repeatedly said his country has not and will not block sanctions on the diamond trade if the European Commission decides to include the measure in one of its packages. The fact that it has not, say two sources within the Belgian government, is because members are convinced that those measures would be more damaging to Europe than to Russia.

Read More: The Vital Missing Link in the U.S. Sanctions Against Russia

That refrain—that it should hurt Russia more than it hurts Europe—has been repeated by leaders from Greece to Germany as an explanation for their opposition to oil and gas embargoes (which, nonetheless, appear to be the focus of the next round, which may arrive this week.week). Although she disagrees with that argument, van Brempt notes that there’s a certain impact of an oil and gas ban that does not apply to luxury goods. “Energy at least affects everyone: consumers, family, industry,” she says. “But diamonds?”

Yet when it comes to the gemstones, says Tom Neys, spokesman for the Antwerp World Diamond Center (AWDC), sanctions may not hurt Russia at all. “Some politicians say, ‘we need to bleed ourselves to make the other bleed.’ But in this case, it’s like you’re not even cutting the other side,” he says. “Russia does not suffer from this sanction, it will be able to earn the exact $1.8 billion somewhere else. Dubai has already stated that very clearly.” And unlike gas, which requires massive infrastructure to transport and thus cannot be readily diverted to other buyers, diamonds are easily moved. “All diamonds of five carats and above, from a whole year’s production, you could fit in a basketball,” Neys says.

And where those diamonds will end up, he adds, undermines decades of work to clean up the industry.

About 20 years ago, the diamond trade responded to concerns that rebel groups in Africa were using the sale of rough diamonds mined there to finance conflicts that undermined legitimate governments by creating a regulatory trade scheme called the Kimberley Process (KP). Supported by a broad coalition of governments (including the E.U., the U.S., South Africa, Zimbabwe, China and Russia), civil actors, and the diamond industry the KP has been largely successful in meeting its immediate goal of eliminating conflict or ‘blood’ diamonds, and helped spur a transition in traditionally secretive Antwerp toward greater transparency and due diligence regarding the conditions in which diamonds are produced.

Sanctions, according to the AWDC, threaten all that. If the diamonds Russia would normally sell to Europe now go instead to other diamond hubs, says Neys, it will cause the loss not only of 10,000 jobs but those ethical gains as well. “If 30% of the market goes to Dubai, then you have thrown away 20 years of transparency and compliance and due diligence into the garbage can and you have no control anymore. We are opening the door to money laundering. We are opening the door to financing terrorism in large volumes.”

Hans Merket, a researcher at the International Peace Information Service in Antwerp, acknowledges that Belgium does a better job than other hubs of ensuring ethical diamond production. “It’s true that the controls in Antwerp are unrivaled, and that there’s no other trading center that has this level of control,” he says. But in a study published at the beginning of April, he draws a direct line between Alrosa and the Russian military, noting that in 1997 the company sponsored a submarine, and paid to maintain it in “combat-ready” position. The submarine was later used in the 2014 annexation of Crimea.

Noting that the Kimberley Process, which includes the Russian Federation, has repeatedly rejected past attempts to expand its definition of conflict diamonds, Merket said in an interview with TIME that it was highly unlikely the organization would now restrict gems whose sale was funding a state-sponsored war.

Instead, he says, Belgium should again assume the leadership role and not only propose E.U. sanctions, but, together with the U.S., persuade other countries to also cease trading Russian diamonds. “There are only four big players today,” he says. “And two of them, the E.U. and the U.S., could coordinate and put pressure on the other two, India and the UAE. Belgian politicians and the sector say they only want sanctions if they’re internationally coordinated. But then they need to start to coordinate them, rather than hiding and waiting to see what’s going to happen.”

One important step, Merket points out, would be to devise a mechanism to make the origin of any diamond readily traceable. While large, extremely valuable stones often come with a certificate of origin, the rest, or roughly 90% of jewelry-quality diamonds, are traded in large parcels where stones from any number of places are mixed. When certificates of origin do exist, they only apply to rough diamonds; once a stone is cut or polished or otherwise “substantially transformed,” as the US customs department puts it, it becomes the export of the country where the process took place.

That’s why even companies like Tiffany’s or Pandora, which have said they will stop buying Russian rough diamonds, cannot assure customers that the gems weren’t mined there. One trade organization in the US, Jewelers of America, has urged its 8,000 members to go beyond current sanctions until sovereignty is restored to Ukraine. “Due to the complexities of the ethical and legal issues attendant to conducting business with Russian counterparties, JA is advising its members to cease the purchase of goods used in jewelry that have emanated from Russia and benefit the Russian government, regardless of where they are cut and/or manufactured,” association president and CEO, David Bonaparte said in a statement to TIME.

From an office on the upper floor of the AWDC’s headquarters, Neys acknowledges that opposition to Russian sanctions is, given the horrors in Ukraine,”not a sympathetic story. But it is a realistic one,” he says. “It’s very easy to break something down, but building something is much harder. That’s what we’ve done during the last 20 years, built something that makes sure that in the end, the customer gets a product that is correct.”

Still, the definition of correct may be changing. In the blocks surrounding Hoveniersstraat, the importers and wholesalers give way to dozens of jewelry stores, some of them plush and intimidatingly formal; others bare and dark enough that they could pass for shoe repair stalls. Not far from the train station, José María Montero and his wife Lidia González stood outside the glittering shop window of one. The Spanish couple had come to Antwerp for the art, but had stopped to admire the jewelry. “I would definitely want to know where they come from, because I don’t want to buy diamonds from Russia,” Montero said. “In my country, we feel a lot of solidarity with Ukraine.”

The original version of this story misstated the number of jobs generated in Antwerp from the diamond trade; it is 30,000, not 10,000. 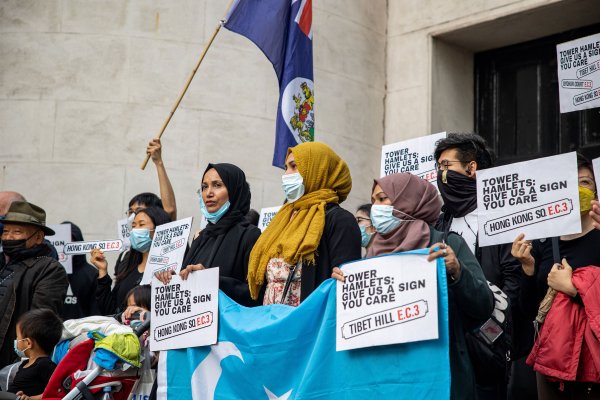 China’s Controversial New Embassy in London
Next Up: Editor's Pick