U.S. House Speaker Nancy Pelosi met Ukraine’s president on Saturday in a previously unannounced visit to Kyiv, telling him that “your fight is a fight for everyone.”

Pelosi, second in line to the U.S. presidency, became the highest-ranked American official to travel to the country since Russia’s invasion. Her visit follows one last weekend by Secretary of State Antony Blinken and Defense Secretary Lloyd Austin.

“Our delegation traveled to Kyiv to send an unmistakable and resounding message to the entire world: America stands firmly with Ukraine,” Pelosi said in a statement released by her office on Sunday.

President Volodymyr Zelensky showed footage of Pelosi’s visit on his Ukrainian-language Twitter account early Sunday. “Thank you for helping to protect the sovereignty and territorial integrity of our state!” he tweeted.

The video showed Zelenskiy shaking hands with Pelosi and other U.S. lawmakers on the streets of Kyiv, including Democrats Gregory Meeks of New York, Adam Schiff of California, Jason Crow of Colorado and Jim McGovern of Massachusetts.

“Our commitment is to be there for you until the fight is done,” Pelosi told Zelenskiy in the video.

Saturday night’s meeting with Zelenskiy lasted for three hours, Schiff said Sunday at a media briefing in Rzeszow, Poland, close to the border with Ukraine.

Schiff, chairman of the House Intelligence Committee, emphasized the importance of “good and timely” U.S. intelligence cooperation with Ukraine.

Pelosi’s delegation will travel on to Warsaw, where they’ll meet with President Andrzej Duda and senior officials, according to the earlier statement.

“When we return to the United States, we will do so further informed, deeply inspired and ready to do what is needed to help the Ukrainian people as they defend democracy for their nation and for the world,” Pelosi said.

U.S. President Joe Biden is currently seeking an additional $33 billion in aid to Ukraine and new authority from Congress to seize and sell property linked to wealthy allies of President Vladimir Putin. Pelosi on Friday termed the aid package “historic” and vowed to pass it as soon as possible.

–With assistance from Polina Vorobieva and Foster Wong. 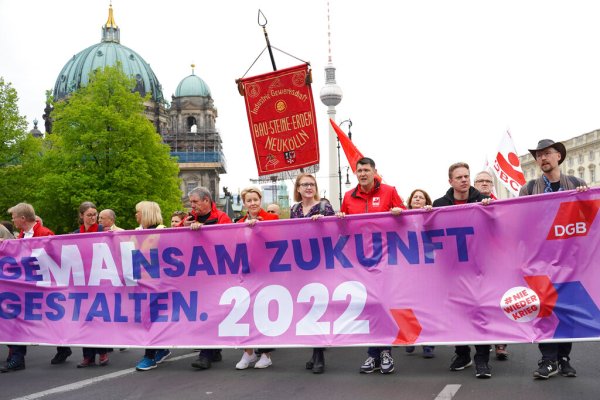 May Day Rallies in Europe Honor Workers
Next Up: Editor's Pick