White Walkers in Game of Thrones
HBO
By Ciara Nugent

I still haven’t seen The Day After Tomorrow. I was 10 when it came out in 2004 and between sibling trips to Blockbuster and sleepovers with fright-loving friends, I had many opportunities. But I was terrified by the trailer’s scenes of water crashing through city blocks. I knew vaguely that they were connected to a real-world threat and I, a studious child, wanted to be able to sleep at night.

Eighteen years later, the apocalyptic nature of climate representation in Hollywood hasn’t changed much. The creators of Game of Thrones (2011), The Dead Don’t Die (2019), Chernobyl (2019), and Don’t Look Up (2021) have all talked about using their world-ending subjects (zombies, nuclear disasters, comets), as metaphors for humanity’s failure to act on climate.

Those symbols have little to do with the ways that the crisis is showing up in my reality so far—anxiety, longer heat waves, a groundswell of youth activism, to name a few. But they’re pretty much all we’ve got; a soon-to-be published analysis by the University of Southern California found that only 2.8% of scripted television and film made in the last five years included any of the climate keywords used by the researchers. That’s despite the issue skyrocketing up the news agenda over the same period.

The disconnect feels like a huge missed opportunity for the climate movement. It could be tapping into the powerful (though admittedly hard to quantify) role that entertainment media has played in shaping society on other issues, notably LGBTQ representation. Instead, TV and film have largely reinforced a sense of climate change as an intractable death sentence. Tween me couldn’t handle it. Bringing climate issues into people’s living rooms in a more nuanced way, however, could help stimulate the behavioral change and political will we need to create.

Anna Jane Joyner is hoping to do just that. Last week, her storytelling consultancy Good Energy launched its Climate Playbook, a publicly available resource that aims to help writers take climate stories beyond the doom-laden tropes, and past lingering industry fears of being too preachy. “I really believe in the ability of stories, particularly film and television, to emotionally move us, which is critical to action,” she tells me over the phone from Los Angeles. “You have to feel something before you’re willing to do something, and it can’t just be fear.”

Joyner, who had spent most of her career working in communications for environmental organizations like the Sierra Club, launched Good Energy in 2019 after two brushes with the entertainment business. First, in 2014, she appeared in an episode of SHOWTIME’s climate documentary series, Years of Living Dangerously: it followed her trying and failing to convince her dad, a climate skeptic and evangelical pastor, to believe in climate change. Then, in late 2018, Alex Maggio, a writer and producer on the CBS show Madam Secretary, called Joyner and asked if she would help him craft a character based on her and her experiences with her father. “That’s kind of when it clicked for me,” Joyner says. “Why aren’t we seeing more of these stories?”

The answer, according to Maggio, lies in the politicization of climate change in the late 1990’s. “At the time, a lot of network executives and producers got really worried about alienating audiences,” he says. “That got inculcated in a whole generation of writers who might have tried to [write about climate] at one point.”

But Maggio says today’s decision makers are largely open to pitches on climate, thanks to consistent polling data showing most Americans care deeply about the crisis (though the taboo may persist at a few networks). The problem now, he argues, is that writers haven’t learned how to approach climate, and get discouraged by both the lack of examples and the sense that tackling it requires complex research. “It’s such an enormous concept that people don’t know where to start,” Maggio says, “so they give up.” Even Charlie Brooker, the British writer of Netflix’s imaginative dystopia series Black Mirror, said in 2019 that incorporating climate into plotlines was “a very, very tough nut to crack.”

Joyner began consulting with writers on a pro-bono basis before the industry’s pandemic shutdown led her team to shift focus to the Climate Playbook. Good Energy is funded by donors including the Sierra Club and Bloomberg Philanthropies. (Joyner says she is looking to IllumiNative and Define American, which campaign for and provide donor-funded consulting services on Indigenous and immigrant stories in pop culture and the media, as models.)

The Good Energy playbook aims to help writers weave climate stories into their work naturally, “so that it doesn’t feel like broccoli wrapped in chocolate,” Joyner says. It includes ideas for climate characters beyond the annoying vegan or eco-terrorist clichés: “a teen skipping school to strike with his crush” or “the Sierra Club lobbyist racking up frequent-flier miles because of their long-distance relationship.” There are seven weird ways to die in the climate crisis. There are also story germs: what happens when someone’s elderly parents don’t want to leave their home in a wildfire-ravaged ranch? Or when a lack of government support after a hurricane forces a young woman “to go on an After Hours–type odyssey” across her flooded city to help neighbors find bags of ice?

Those ideas remind us that climate action and climate impacts don’t happen in a vacuum, they’re bound up with everything else in our reality. That means they don’t need to be consigned to apocalypse tales. “No matter what genre you’re working in, we’re still living in a world where climate is happening,” Joyner says. “And of course, there’s still romance in that world, there’s still comedy and absurdity, and so all that should also be showcased on screen.”

A turning point for Hollywood

The shift that Good Energy wants to see in film and television aligns with calls for better representation of the groups that have historically been excluded from Hollywood. Since climate change is hitting poor people, people of color, and countries in the global south hardest and earliest, Joyner says telling more climate stories should mean telling more stories about and by those communities. Good Energy partnered with the Center for Cultural Power, an organization fighting for equality in the arts, to make sure those discussions informed the playbook.

A trickle of realistic climate representation has begun in the last few years. In cinema, Joyner cites Icelandic films First Reformed (2017) and Woman at War (2018). Television has offered a little more. In 2019, The Affair’s fifth season skipped forward 30 years to show the child of the two protagonists as a climate scientist. The same year, Big Little Lies’ second season had a memorable B-plot in which Laura Dern’s onscreen daughter faints after learning about climate change at school. Last year’s comedy Hacks features a rant on boomers’ environmental failings from its millennial protagonist.

Joyner says a lot more is in the pipeline. Her goal is for 50% of scripts to include climate change references by 2030 at the latest—anything from brief moments to plot drivers. “I think we’re all kind of learning this together, because there isn’t much [to draw on],” she says. “But there’s a lot of people experimenting and pitching. There’s definitely been a turning point in the industry. And we will continue to see more and more of these stories.” 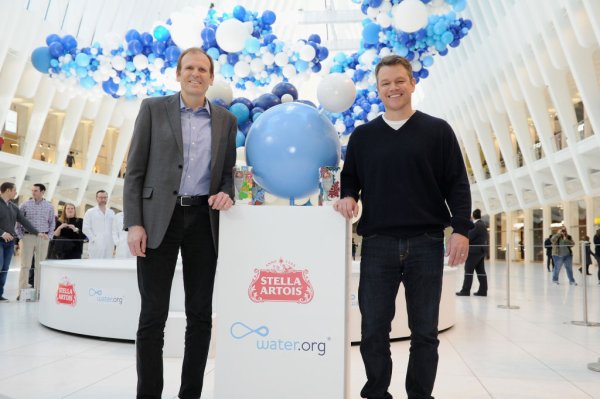 Matt Damon Wants You to Care About Water
Next Up: Editor's Pick