'I Did Not Want to Die.' A Mariupol Resident's Journey by Sea to Escape the Russian Siege

When Russian forces hit the Donetsk Regional Drama Theater in Mariupol, Ukraine, Dmitry Yurin was just a couple hundred feet away, getting ready to celebrate his 31st birthday at home with his mother. The explosion was so powerful that it threw them off their feet.

“I heard screams,” he says. “I came closer, and then I saw with my own eyes around 200 dead people.”

More than 1,300 people, including women and children, were taking shelter at the theater when it was attacked on March 16, according to the Associated Press. After helping pull women and children from the rubble, Yurin was shaken. The city had been under siege by Russian troops for weeks, with thousands of people trapped with no electricity, running water or fresh supplies of food. But this was different. “I looked at my hands. They were fully covered in blood,” he says.

But Russia controlled most roads in and out of the city, blocking aid and humanitarian corridors from opening to allow civilians to escape heavy fighting between Ukrainian and Russian forces. A keen fisherman, Yurin knew the area of Mariupol’s port well. He decided that his best bet would be to attempt to flee the Southeast Ukrainian city by sea. “I crossed myself and jumped into the water.” His mother wouldn’t be able to make the journey, and didn’t want to leave their home behind.

Bouyed by a few plastic bottles, Yurin swam in frigid temperatures for at least two miles along the coast of Mariupol, leaving from Pishchanka Beach, and headed west until he reached the village of Melekyne. Worried that his muscles would cramp up in freezing temperatures, he tied safety pins around his neck to prick his legs if they began to fail.

After about 3 hours of swimming, he staggered out of the sea and was helped by strangers: a woman offered him hot tea, a man gave him a ride to the city of Berdyansk, also occupied by Russian forces. Eventually, he made his way to Western Ukraine.

With no phone or documents with him, Yurin is now in Lviv, not sure of what’s next. He continues to struggle with memories of what he saw in Mariupol. “I don’t sleep more than an hour and a half per night,” he said in an interview in early April over Zoom. He worries about those left behind, especially his mother. “Before I left, I told her, ‘I am going to try to take you out of there,’” he says. He still hopes he’ll be able to.

As of Wednesday, Ukrainian forces continued to fight in the besieged city. About 100,000 people are believed to remain in the encircled city, hoping for a chance to flee. 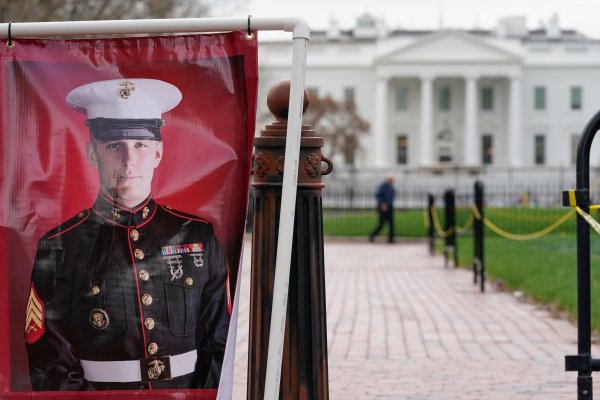