People line up to be tested for COVID-19 in Zhongguancun, Beijing on April 26, 2022.
JADE GAO/AFP via Getty Images
By Bloomberg

Beijing started mass testing millions of its residents as part of an unprecedented scheme designed to identify and squash omicron’s stealthy spread before it spirals out of control in the Chinese capital.

Nearly 20 million people will undergo three rounds of COVID testing through the weekend as Beijing’s municipal government expands the effort that started in the eastern Chaoyang district, where most cases in the recent flareup have emerged. The broader testing will encompass 10 other administrative districts and an economic development zone, which houses the headquarters for the e-commerce giant JD.com Inc. and other high-tech firms.

The scale of the program is unparalleled in Beijing, even as China has kept COVID in check since early 2020 thanks in large part to massive testing efforts that repeatedly spotted tiny incursions of the pathogen in the world’s most populous country. The arrival of the more infectious omicron variant has managed to penetrate the defenses of several cities and led to lockdowns like the one in Shanghai, an outcome authorities in Beijing hope to avoid.

The testing urgency underscores the importance of figuring out how long and how broadly omicron has been quietly spreading in the sprawling city, and devising a way to cut off those chains of transmission. The city on Monday locked down parts of the Chaoyang district, home to many expatriates, most foreign embassies and the central business districts. The test results will help local leaders figure out how to isolate the infected and those exposed to the virus.

Read More: China’s Public Is Divided Over Its Zero-COVID Approach

The mass testing and Shanghai’s experience have caused jitters in Beijing about a potential wider lockdown, as such sweeping restrictions are now being implemented more frequently to control COVID outbreaks caused by the hyper-infectious omicron variants. Currently more than 50 million people in China are under lockdown.

Chief among them are the 25 million people in the financial hub of Shanghai, most of whom have endured almost a month-long home confinement and struggled with food shortages and limited access to health care. The lingering lockdown has led to a growing public outcry against the harsh containment efforts that are part of a so-called COVID Zero strategy, an approach most of the world abandoned once they accepted that the virus was endemic.

While daily infections are dropping in Shanghai, down to 16,980 on Monday from more than 27,000 a day previously, deaths have started to mount. They reached nearly 200 as of Tuesday, mostly claiming the city’s elderly who have underlying ailments.

—With assistance from Davy Zhu, Jane Pong and James Mayger 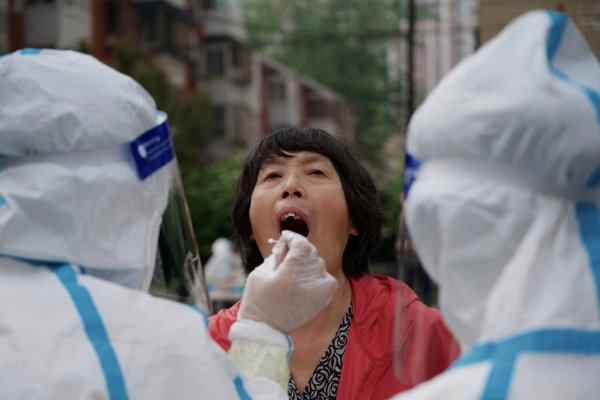