Why U.S. Diplomats and Their Protectors in Ukraine Are a Key Signal to Russia

Two competing versions of Ukraine are consuming Washington right now, about whether Russia is on its back foot or as dangerous as ever. Both might well be true. The U.S. diplomats about to reenter the country—and the Marines protecting them—are the Americans most likely to find themselves at immediate risk.

Plenty in Washington were parsing Secretary of State Antony Blinken’s words in Poland carefully when he said Monday morning that U.S. diplomats would be returning to Ukraine after a two-month absence. Other countries have already restored diplomats to Kyiv, a tacit nod to the fact the Ukrainian capital seems to have dodged being taken by Russia. Attacks there are still happening, but it seems Russia is more focused on other cities.

Still, putting U.S. diplomats back into the country is a choice that historians will no doubt review with great interest. The most immediate predicate is a still-neutral United States keeping its diplomats in Europe at the start of World War II, often placing markers like U.S. flags on the roofs of buildings in the hopes German forces wouldn’t attack them in the war’s early days. (It seldom worked.)

The U.S. today has no massive compound in Kyiv under its control, as it had built in Baghdad; the fortified Green Zone came to be known as The Emerald City and private security companies often took care of diplomats and VIP civilian administrators. And unlike Iraq, where the U.S. committed to on-the-ground defense of its civilian diplomats, Americans from voters to Cabinet secretaries are in agreement they don’t want to deploy troops to Ukraine.

Which leaves the diplomats in a bit of a pickle. At least at first, they’re going to commute to Lviv from Poland. Eventually, Blinken said, the United States would reopen its embassy in Kyiv, which has been closed since the war began on Feb. 24.

But senior officials traveling with the U.S. delegation said they did not have information about whether U.S. Marines would provide security at the facility, as is tradition dating to the 1700s and formalized after World War II. Some have already been deployed to Europe. Marines at the embassy gates would be expected, but it also could put Americans in military uniforms on Ukrainian soil, an act that could be seen as a shift to U.S. direct involvement in fighting. It’s one thing to sell weapons, send humanitarian aid, and even share intelligence; it’s another to put weapons in Americans’ hands in the field.

With the planned return of the diplomats, it seems like the early skittishness of U.S. officials about provoking Russia is fading. A covert plan for the Secretaries of Defense and State to pop into Kyiv had its cover blown by no less than Ukrainian President Volodymyr Zelensky, and yet the duo and a small retinue of aides still made the 11-hour train ride from Poland on Sunday with U.S. spy technology checking their every move. Once back across the Polish border, the Americans sounded like their allies were winning—and their foes losing. “We want to see Russia weakened to the degree it cannot do the kind things that it has done in invading Ukraine,” Defense Secretary Lloyd Austin said after he returned from Kyiv, an aggressive line against a still-nuclear-capable rival. And the Ukraine Defense Consultative Group—the West’s effort to boost Ukraine—is due to meet Tuesday at Ramstein Air Base in Germany with Austin preparing for more American aid, including another $165 million to restock Soviet-era weaponry.

But, there’s also plenty of reason for Washington’s think tankers to fret about the dangers embedded in any conflict with Moscow. The U.S. foreign policy machine sought to cast Russia’s test of an intercontinental ballistic missile last week as a “nonevent,” hoping to de-escalate. The Russian forces destroyed five train stations hours after Austin and Blinken ended their three-hour meeting in Kyiv. And the Biden Administration hours later announced it would nominate a career diplomat to serve as ambassador to Ukraine, backing up Blinken’s assertion that U.S. diplomatic outposts would soon return to some version of functionality after largely ceasing operations two months ago when it became clear the war would be a challenge for Americans’ security. The U.S. still hasn’t sanctioned the mother of Russian President Vladimir Putin’s children for fear of how he might respond.

In short: Washington is still wary of Moscow, but it is starting some high-risk tests—like reopening diplomatic outposts in Ukraine—to see how far Putin can be pushed. Every single provocation and response—from both sides—could send the war cascading to total catastrophe for Ukrainians. The war has already killed roughly 8,000 Ukrainians, according to the UN, and Russia is showing no signs of slowing down its menace.

U.S. diplomats have a long history of working at terrible and unpredictable risk to themselves. There have been dozens of attacks on diplomatic outposts in all corners of the globe, and the incoming RPGs don’t discriminate between civilian diplomats, Marines, hired contractors, or local bystanders. The deadliest, the double 1998 attack on the U.S. embassies in Kenya and Tanzania, left 224 dead, including 12 Americans. Before that, attacks on diplomatic posts in Beirut in 1983 and 1984 left America shaken as it saw images of suicide bombers destroying an American footprint in the Middle East evocative of the 1979 fall of the U.S. embassy in Tehran. Decades later, that gut-punch of a feeling came back when four Americans—including the ambassador—died in the siege of a diplomatic station in Benghazi, Libya in 2012.

But it’s tough for Washington to say it supports Zelensky and his team while keeping diplomats away. The implication is Kyiv’s risks are too great to justify State Department staff. So the diplomats, at least in some measure, are heading back to Ukraine, probably with heavily armed Marine pals. It’s one thing for diplomats to negotiate with policy. It’s another for them to do so with their lives. 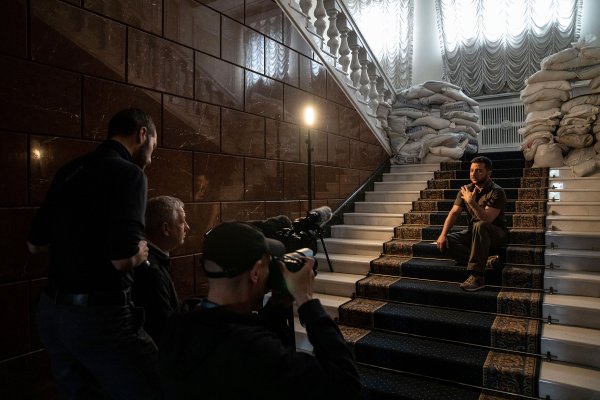 Don’t Discount the Political Power of a Sinking Russian War Ship
Next Up: Editor's Pick