Workers at an Apple Inc.store in Atlanta became the first in the U.S. to file for a union election Wednesday, setting up a battle between organized labor and a Silicon Valley titan.

The proposed union includes 107 workers at an Apple store in Cumberland Mall in northwest Atlanta. The group filed a petition with the National Labor Relations Board Wednesday after it had collected signed cards of support from 70% of eligible employees, said Derrick Bowles, a Cumberland Apple store worker and member of the organizing committee.

A successful campaign could establish a foothold for organized labor in Big Tech as a national worker shortage forces employers to reevaluate pay and working conditions. The effort is backed by the Communications Workers of America under a broader campaign to organize tech employees. The Atlanta group would be called Apple Workers Union, according to a copy of the petition and internal campaign literature reviewed by Bloomberg Law.

The union has proposed an on-site election May 5-7.

“Right now, I think, is the right time because we simply see momentum swinging the way of workers,” Bowles said. “As we sat back and re-evaluated, what we realized is that we love being at Apple—and leaving Apple, that’s not something any of us wants to do. But improving it is something we wanted to do.”

Organizers say that pay at the store falls below the living wage for Atlanta. Starting pay is about $20 an hour, below the $31-an-hour living wage for a single parent with one child, according to the Massachusetts Institute of Technology. The union wants to raise base wages to $28 an hour, the minimum it says is needed for a single employee to afford a one-bedroom apartment without being burdened by rent. It’s also asking for bigger raises to offset inflation and greater profit sharing to match corporate employees.

Apple Workers Union faces an uphill battle against a tech giant known for uniformity in its retail stores, the cornerstone of its strategy to deliver a sleek customer experience. Since the first brick-and-mortar location opened in 2001, the company has expanded to more than 500 stores worldwide, nearly 300 of which are in the U.S.

The filing comes as another Apple store in New York seeks to organize under Workers United, the union behind the recent wave of victories at Starbucks Corp. stores. Union leaders hope that a victory in Atlanta will set off a cascade of wins similar to the first Starbucks that unionized in Buffalo, N.Y., last December, Bowles said.

Although the share of private-sector workers belonging to unions remains near historic lows, labor leaders are bullish after the Starbucks wins and the unexpected coup at an Amazon.com Inc. warehouse on Staten Island, N.Y.

Discussions about forming a union at the Atlanta store began after several workers, including Bowles, began following the fight over the Amazon union in Bessemer, Ala. Although the Amazon workers were defeated in the first election, it inspired the Apple workers to step forward as the first store.

“Somebody has got to be the first to do something,” Bowles said. “Being first doesn’t matter to us—doing it is what matters to us. And if we have to be first, we will be first.”

Microsoft Corp., Apple’s main competitor, remains nonunion, as do most major tech companies. But there have recently been flickers of unrest, with workers at Alphabet Inc., Google’s parent company, launching a worker advocacy group last year, and employees at Activision Blizzard Inc. seeking to form a union before the company is acquired by Microsoft.

The Apple Store Union’s petition would need to be reviewed by the NLRB, which would then hold hearings on the bargaining unit’s size and other key issues. Apple hasn’t said whether it would consider the unusual step of recognizing the workers voluntarily.

—With assistance from Mark Gurman 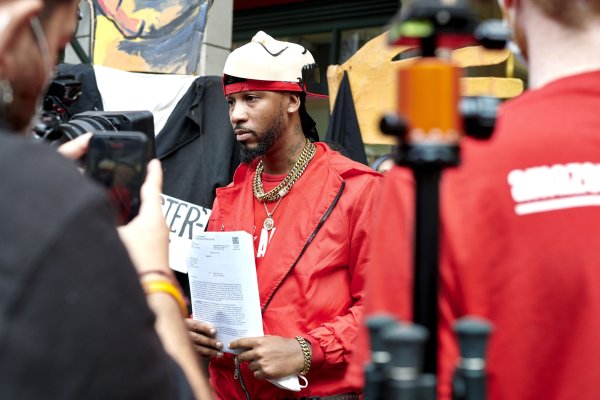 Amazon Union On Track for Historic Victory in New York
Next Up: Editor's Pick