Even before Vladimir Putin launched an invasion of Ukraine in February, any long conversation with a diplomat or someone working in adjacent national-security fields eventually circled around to Russia and its enigmatic leader. The former empire and heir to the Soviet Union, Russia has been publicly preaching a gospel of cooperation with the West for the last two decades, yet no one watching truly believes Putin’s Russia to be a benevolent giant that spans 11 time zones. Be it his pride, his ambition, or his cruelty, Putin’s motives have seldom been seen as pure as the snow in Moscow.

Starting a war in Ukraine did little to comfort those who had fallen for Putin’s promises. Among those who have been skeptical from the start? U.S. President Joe Biden, who after decades on the Senate Foreign Relations Committee and eight years as Vice President moved into the Oval Office with as much experience abroad as anyone since George H.W. Bush. And unlike his predecessors who sought new treaties, expanded economic opportunities, a partner in a war on terrorism, a reset to zero, or kompromat on a rival, Biden is fairly clear-eyed on what is possible with Russia—and, perhaps more important, what is not.

That’s why, on Tuesday, the United States circulated an outline for as much as another $800 million in military aid to Ukraine, adding to the already enormous pile of almost $14 billion sent there since fighting officially began on Feb. 24. Officials stressed that they were moving quickly, rushing to get more tools to help Ukrainians defend their country where civilians in places like Mariupol are facing increasingly dire conditions that deteriorate by hour.

Russia, meanwhile, rejected a ceasefire and, in what it calls “another phase,” continued shelling civilian neighborhoods, factories where Ukrainians were seeking shelter, and even a feeding site.

For veteran diplomats, this behavior by Putin seemed tragically predictable. Their memoirs are full of stories of the longtime Russian President’s intentional delays, direct insults, petty affronts, and even menace by a dog. Some examples, like Putin’s deployment of his labrador to intimidate German Chancellor Angela Merkel are famous. Others, like the off-handed denigration of top U.S. officials, are the stuff of legend in the diplomatic corps. Once, Putin kept Secretary of State Condoleezza Rice waiting for almost three hours in a Red Square holding room, only to be told that the meeting had been moved to Putin’s dacha 40 minutes away in Barvikha. The explanation: two members of Putin’s team were celebrating birthdays and wanted to avail themselves of the resort’s Georgian wine cellar, according to former U.S. Ambassador to Russia William J. Burns.

The State Department’s archives are full of memos assessing the Putin era and how he has sought to take advantage of the United States’ over-extended agenda. As Burns—a career diplomat who rose to become Deputy Secretary of State and now serves as the CIA’s chief—described Russia’s place in the new world order in a 2008 memo to Rice: “For most of the Russian elite, still intoxicated by an unexpectedly rapid revival of Great Power status, the world around them is full of tactical opportunities. … From the Kremlin’s perspective, Russia’s own neighborhood looks a lot better than it did a year ago, with NATO expansion less imminent, Ukraine’s color revolution fading, Georgia at least temporarily sobered, and Central Asia more attractive to Russian interests.”

In the Joseph Stalin era, such a condition even had its own slang: golovokruzhenie ot uspekhov, or dizziness from success.

But, as Burns warned Rice, it wasn’t all as Putin put it forward in meetings with Americans. “Behind the curtain, however, stands an emperor who is not fully clothed.” And naked tyrants are dangerous ones.

Putin, humiliated by his country’s failure to preserve the communist system, vowed to rebuild Russia to its former glory. In ways as simple as changing the national anthem back to its tsarist tune, it’s easy to see Putin attempting to rewrite history to Make Russia Great Again. As TIME’s Simon Shuster wrote in a piece last year, the former Soviet nation has mastered that art.

But here in Washington, diplomats have been watching with great concern. A return to Soviet greatness could be a return to Cold War tensions. Putin already has essentially declared himself president for life and severely curbed any opposition. At least for now, Putin is Russia, and Russia is Putin. And he sees the Cold War as the Good Old Days.

The Biden team has been doing everything it can to confront Russia’s aggression in Ukraine without, in the President’s own words, starting World War III. Cash and supplies have been sent, Burns is sharing intelligence with allies and the public alike, and there has been no shortage of bipartisan support for the Ukrainians—though there is zero political interest or backing for U.S. troops to get involved.

But the U.S. seems to be sliding back into its own Cold War posture, when a firm spine against Moscow was not just necessary but patriotic. Opposing the so-called Evil Empire was as American as peanut butter-and-jelly sandwiches and apple pie. Now, support for U.S. leadership had spiked in NATO countries even before the Russian invasion, according to Gallup polls in 20 of the 27 NATO nations. Merkel’s departure left Europe without its top truth-teller to Putin, and French President Emmanuel Macron is in his own nasty re-election bid at the moment. NATO feels revitalized after years of drubbing by ex-President Donald Trump.

That said, not all diplomats are wishing for that time travel. The Cold War brought major divisions of the globe and drained budgets. Even in not taking sides, the Non-Aligned Movement and its 120 members made a choice during the Cold War. After all, the phrase “you’re with us or you’re against us” didn’t originate with George W. Bush.

If Russia continues its aggression against Ukrainians, a return to 1980s Great Powers theory that divided the globe could be in the offing. Polarity created a sense of stability, however uneasy. Smaller countries hated to be made to feel like pawns, but many fell in line to keep open economic, diplomatic, and military lines. Nothing kills national pride like having to run something past your patrons in Foggy Bottom or the Pentagon. Still, the dynamic kept the world from sliding into the biggest land war in Europe since World War II.

Washington isn’t at that point just yet and is doing everything it can to end Russia’s war without making the United States an official party to it. Still, history can be instructive, and Russia seems plenty interested in rebuilding the Soviet-era metropole. It’s coming at tremendous cost to his own people, but Putin hears the echo of the Stalinist legends. It’s almost as if he is trying to create his own title: Vladimir the Great. There’s just one problem with that chase, and that’s the United States that simply cannot allow Moscow to eclipse Washington’s power. 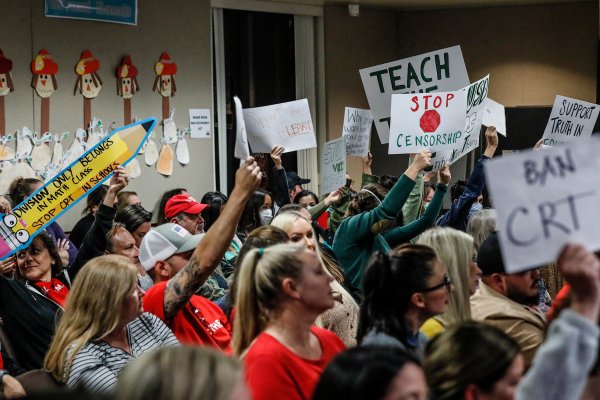 How Ron DeSantis Could Wind Up Dictating Your Kids’ Textbooks
Next Up: Editor's Pick